A woman who was on the way to her dying mother was bumped off a United Airlines flight short before doors were closed.  Her travel agent, “Traveler Help Desk”, cancelled her ticket due to an ‘external change’.

The ticket was purchased through the travel agent and then a change was processed through United Airlines after which the agency cancelled the ticket, leaving the passenger without a flight.

There seems to be no end to the outrageous things that happen to passengers on U.S. based airlines yet at the same time this isn’t even the sole fault of United Airlines. Rather it is the strange travel agency that clearly dropped the ball here.

The article in the New York Times (access here) brought up the entire matter today.

… Holding a United Airlines ticket purchased for her by her landlord, she probably would have. But minutes before departure, already buckled into her seat, she was ordered to leave the plane. The gate agent told her that her reservation had been canceled. Traveler Help Desk, the online agency that sold the ticket, had rescinded it because the landlord made a change directly through United — even though United had assured the landlord that it was not a problem to do so.

Unable to fly, Ms. Amrich drove through the night, not stopping even to use the bathroom. Her sister, in the hospital room, held a phone to their mother’s ear, and Ms. Amrich begged her to hold on.

She was still driving when her cellphone rang again. Her mother was dead. …

Carolyn Gallant, customer service supervisor at Traveler Help Desk, confirmed that the agency had voided the ticket after it saw that a change had been made to the reservation. She said that the intention had been to protect Ms. Amrich against possible fraud and that a representative had tried “numerous times” to contact Ms. Amrich first. …

“We had no way of knowing this was a change by Ms. Amrich directly with the carrier,” she said in an email, adding that if the change had been unauthorized and the agency had not canceled the ticket, Ms. Amrich would have lost her money. “We voided the ticket to protect Ms. Amrich.”

“I am just so sorry for Ms. Amrich’s loss,” Ms. Gallant wrote. “It is tragic. I understand it was unfortunate the ticket ended up voided. Had she contacted us directly to make the change, this all would have been avoided.”

First of all, it’s already a bad choice to book through some obscure travel agent in this case one called “Traveler Help Desk”. Yes, in this case the article states that this was the cheapest ticket that came up when searching for it (I doubt that but let’s forget about this for a moment). Booking bulk fares through unknown travel agents literally cries for trouble. You should always book directly with the airline or at least one of the big OTA’s.

In any case it’s common practice that airlines don’t allow changes to tickets issued by travel agents before the first coupon (flight sector) has been flown. Airlines usually refer the customer back to the agency that booked the ticket. There are exceptions to this such as rebookings for operational reasons or standby flights.

Whatever caused United to accept ticket changed directly, they should have sorted it out properly. It’s very much possible they did so under ‘operational changes’ as the passenger claimed an emergency but the article doesn’t include that info. Apparently this change then caused a message to be sent to the travel agent who then voided the ticket. It should be noted that this had all been paid by the ladies landlord as she couldn’t afford a ticket herself. The agency claims they tried to get in touch with the purchasing party but nobody answered.

How did United deal with the situation? In their usual ‘diplomatic’ way.

… Minutes later, the gate agent came on board to remove her.

When Ms. Amrich pleaded, saying her mother was dying, the agent responded that her ticket had been refunded and that “nobody flies for free.”

Back in the airport, Ms. Amrich called Ms. Prelas, sobbing. Ms. Prelas got on the phone with the gate agent and offered to pay for another ticket.

“I said: ‘Take my credit card. We’ll straighten this out later, but get her on that plane,’” Ms. Prelas said. The agent, she said, responded that Ms. Amrich could not get back on the plane.

Yes, the gate agent is correct that all passengers need a valid ticket in order to travel. I do have several problems with his approach though as far as the communication is concerned. They already gave her the boarding pass and allowed her to get on the plane. A ticket shouldn’t be able to get canceled/voided once the coupon is ‘in use’ which means the passenger is already traveling. Who do you guess is it fault here?

All in all this entire affair was a complete mess with way too many parties involved and amateurs working on the ticket.

The story of the travel agent doesn’t make any sense and just reaffirms my position that using a travel agent is generally a bad idea unless you’re booking a complicated ticket in which case you should pick an agent you know and trust, not some random rubbish from the internet. United also dropped the ball here on more than one occasion. They should have never accepted the re-booking from the customer directly if this is against the ticket conditions if it comes with the consequence that the ticket will be cancelled by the agent. I don’t buy the story that the agency suspected fraud for even one minute.

The customer also has some blame here. Obviously neither of the two ladies involved in this purchase was very experienced. Why buy a product from source A and then contact B to make a change? This case is a good example of what can happen when purchasing travel products from unreliable sources and not doing your homework. Unfortunately the extremely sad circumstances make this case especially serious. United tried to send the lady flowers, as if that would make up for it. 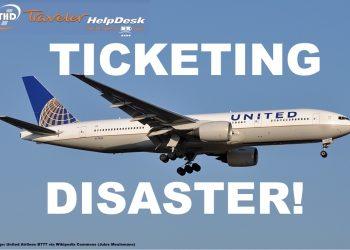