A woman flying American Airlines from DFW to Charlotte went full on crazy, attacking three crew members and biting at least one of them. 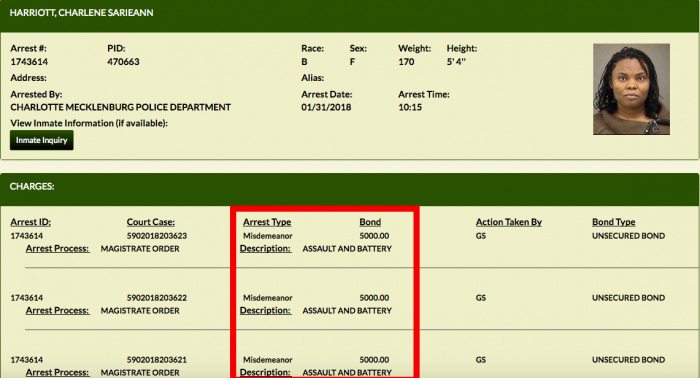 Passengers and crew were able to subdue the attacker and restrain her with duct tape in the front section of the cabin.

Apparently the passenger tried to reach the cockpit from her seat in Economy Class and in the process started to battle flight attendants and passengers.

You can read more from the Charlotte Observer (see here).

A passenger was charged Thursday after federal authorities said she attacked three crew members aboard an American Airlines flight as it approached Charlotte’s airport.

The FBI charged Charlene Sarieann Harriott, 36, with interfering with a flight crew member and attendants during a flight Wednesday morning from Dallas/ Fort Worth to Charlotte.

Harriott was seated at the rear of Flight 1033 as it prepared to land at Charlotte’s airport, according to a criminal complaint. Flight attendants had taken seats when Harriott ran from the last row and toward the cockpit.

The attendants first ordered her to stop, then gave chase – just as the flight was touching down.

They eventually restrained her with duct tape and zip ties in the first-class section as the plane landed, it says, but Harriott “became more aggressive and physically violent toward the flight crew.”

Not sure what else is to say because there’s really nothing apart from describing this with one word: Crazy!

I looked up the arrest details from the Sheriff’s Office in North Carolina (access here) and was surprised that only $5000 bond per charge (15,000 total) applies here. Not exactly a minor incident. Definitely going to monitor this to see what comes out of it!