Here’s comprehensive look at Starwood Preferred Guest (SPG) promotions that you can take advantage of this month.

SPG has launched Great Weeks, Grand Weekends-global promotion that is valid for stays between January 16 – April 15, 2018.

SPG has launched a bonus Starpoints offer for stays in Latin America through April 15, 2018

SPG has launched targeted promotion for members that are part of “Your World Rewards” . Members can earn bonus Starpoints for stays between January 1 – March 31, 2018.

SPG members can earn double Starpoints for their stays in Japan, Korea and Guam through March 31, 2018.

SPG has launched SPG for the Win-win promotion for Travel Professional that arrange events and meetings through March 31, 2018.

SPG For The Win-win Promotion For Travel Professionals Through March 31, 2018

SPG members that book a suite in the AMericas can earn 3,000 bonus Starpoints through December 31, 2018.

SPG “Find Your Suite Spot” rate promotion for stays in the Middle East and Africa that comes with 3,000 Starpoints through March 31, 2018. 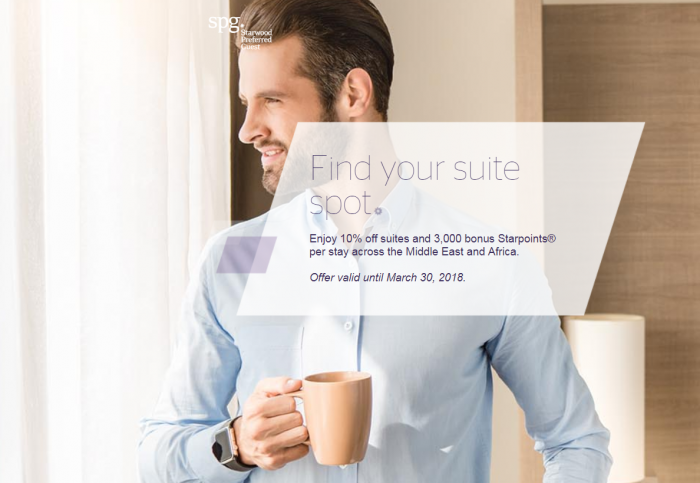 SPG has extended the Paradise is Closer 35% off Starpoints awards promotions through March 5, 2018.

SPG Paradise Is Closer 35% Off Starpoints Awards At Select Resorts Through March 5, 2018 (Update With New Hotels)

SPG is running targeted promotions that can only be found on one’s promo dashboard.

SPG members have last chance to take advantage of Gold or Platinum status match opportunity that ends on June 30, 2018.

Starwood has instant Preferred Plus sign up available that comes with Gold light benefits:

Here are some Starwood rate promotions:

SPG members can save 35%, get a free night and double Starpoints in Hawaii and French Polynesia through June 30,2 018.

SPG has rate plan where your rate for the second and sometimes third night is dependent of your birth year.

SPG is offering 30% off stays in Hawaii + triple HawaiianMiles for stays through December 20, 2018.

SPG is offering 40% off of every second night in the Americas through January 31, 2018 (extended).

SPG started their latest 35% off Starpoints sale earlier this month that goes until mid-March (read more here).  I already purchased the yearly maximum as then they likely offer extra buying opportunity later in the year.

Seems that quite a few readers were able to register for the latest Select Member Exclusive promotion offer (read more) that is valid for stays through the end of April. You can combine this with other SPG bonus opportunities.