Malaysia Airlines has returned their Business Class sale ex Thailand to various destinations in Asia which are great to collect Status Miles/Credits, especially if you credit to British Airways Executive Club.

This promotion / sale is finally back with flights originating from Bangkok and Phuket offering decent fares within Asia as well as some good prices to Australia as well.

The booking window varies (ends Febuary 19th 2018 with travel until 31st October 2018) so I felt it might be a good opportunity to once again bring this to the attention of our LoyaltyLobby readers in the region who might be able to utilize it.

There are many destinations which I will list below, however for the purpose of maximizing your status credits with British Airways it is key to select flights that are over a certain threshold to jump from just 40 Tier Points for shorter flights (such as the feeder BKK-KUL) up to 140 Tier Points for the connection depending on distance. The longer flights to Australia even earn 160 per flight. All in all the average and best priced tickets such as the ones to Beijing and Shanghai net you 360 Tier points for 18,370 THB (~US$600).

The following are some offers ex Bangkok and I have verified that the advertised prices are indeed available. 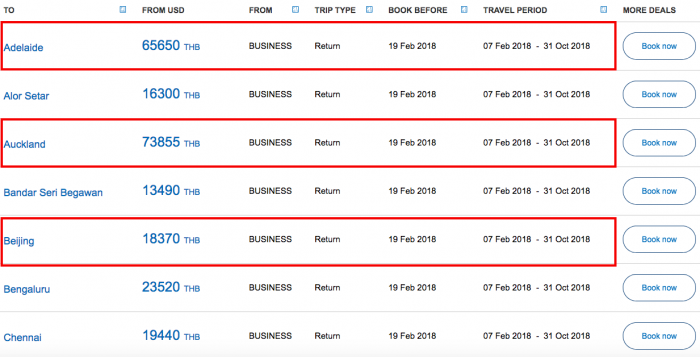 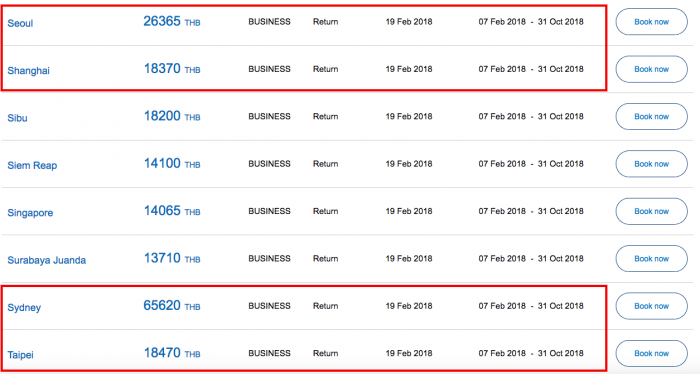 As can be seen the Australia Business class fares are also quite reasonable, even though not that crazy cheap as before when It was available for way under US$1000.

This time around Seoul isn’t as cheap as before either and Osaka / Tokyo are not included at reasonable fares in this sale which is really unfortunate. Still,  there are a range of other attractive destinations included, many of which yield a 360 tier point credit such as Beijing, Shanghai, Taipei and others.

Once you consult the website you see plenty of additional destinations available so you might want to have a look there to see if there is something that suits your needs.

These fares have many advantages since the destinations are actually very nice and useful for a holiday or business trip. You can incorporate many cities in one ticket through open jaw options and even go as far as include an overnight (transfer up to 24h) in Kuala Lumpur for the same price. Stopovers are available for US$50 extra which I used a few weeks ago in KL.

The new First Class and Business Class Lounge at the Satellite Terminal should open again this coming week (already two weeks late, much to my disappointment when I flew through KLIA last week, having scheduled my flight so that I would be able to have an early peek).

These fares have been coming and going for the last two years. You can collect plenty of Tier Points or qualifying miles with these fares and at a very low price.

As far as the service on board is concerned I actually like Malaysia Airlines and always found the crew to be very pleasant. The food is decent with the signature Malay satay and on some routes including all the A330/A350 operated ones you can actually pre-order your meal and select out of an extensive list of very nice dishes through the ‘Chef On Call’ option (see here).