A LoyaltyLobby reader dropped me a message on Facebook about the DCC rate at the Hilton Beijing and what had posted to his account in the UK after using Curve card. 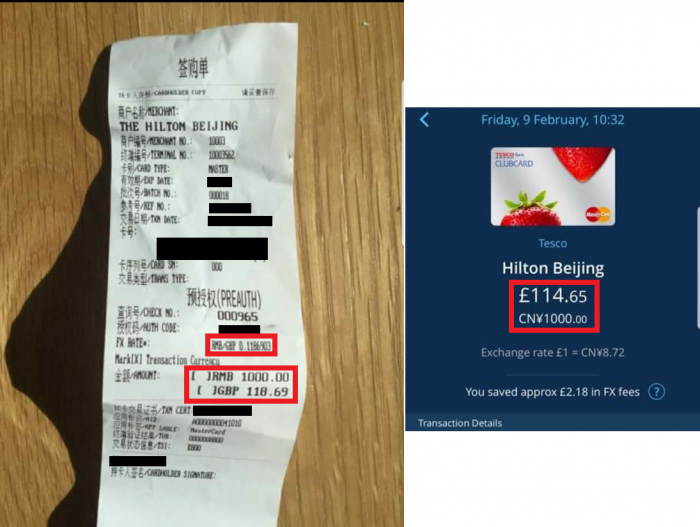 We have written about DCC extensively here on LoyaltyLobby over the years and it is basically never beneficial for the consumer. The merchant’s credit card processor instead of Visa or MasterCard does the conversion from the currency of the country you are in to you card’s one and bakes in a fee of 3% to 5%.

The spread between what Hilton DCC rate would have been and what was charged to reader’s card was 3.52%. Had a look at the Curve (basically a middle mad here) and they charge 1% for the conversion.

The problem often is, especially in China, that the front desk plays dumb and claims that the charge is in local currency when it is not. You usually need to get a receipt that only shows the local currency and nothing else. This may require management’s involvement or using American Express card that doesn’t allow DCC scam or UnionPay.

The credit card slip usually states the percentage fee over the live rate. Surprised that in China they are allowed not to disclose this.

The credit card processor basically splits this spread with the merchant and both are happy at the customer’s expense.

Cannot count the number of times I have had to ask a hotel in China to reverse the charge and run it in RMB without the DCC mess. Used to be more of a challenge but it has gotten easier lately. I guess that more guests have become aware of this practice and won’t tolerate it.