The U.S. Curling Team had a fantastic run during the Olympics in Pyongchang and just won Gold yesterday after which they tweeted to Delta that they’d be flying home on Monday, teasing the possibility of an upgrade. 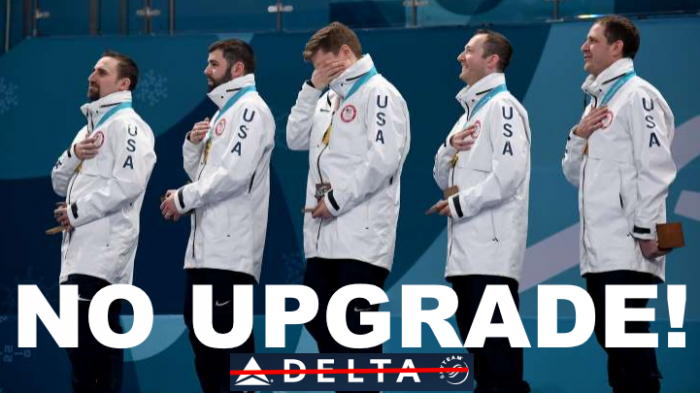 The tweet was quickly responded to by Delta saying that no upgrades were available which could be seen as a giant PR blunder by the Atlanta based carrier.

While the tweet was possibly not all that serious in it’s original form this would have been a great way for Delta to come up with a good answer and ultimately some free positive publicity, an opportunity they quickly lost.

Here is the Tweet by USA Curling and Delta’s response: 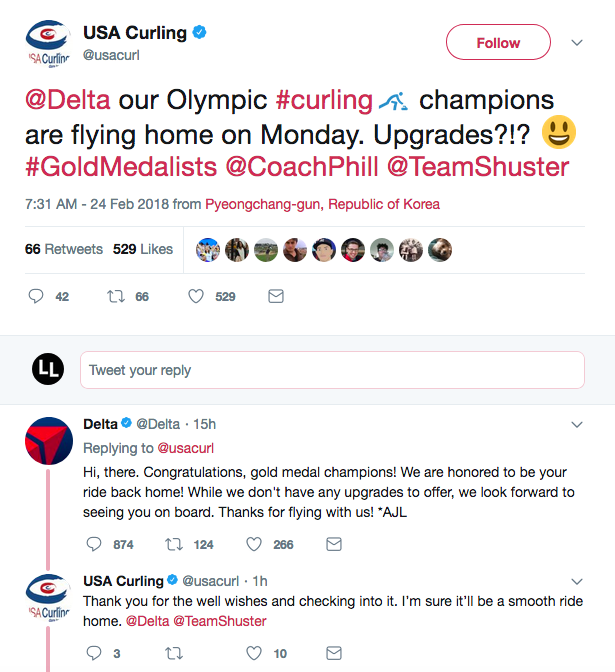 Now a quick look at the Delta flights from Seoul to the U.S. revealed that there are three flights on Monday: Seattle, Detroit and Atlanta. While the Seattle and Atlanta flights are indeed already pretty full, the Detroit flight still has plenty of seats in Delta One Business Class at this point:

As of today Team USA won 9 Gold Medals and while some of these are teams, most are individual. While anything can happen at the time of departure once they check in at the airport I think it should be a no brainer for an airline (especially their own flag carriers) to upgrade gold medalists to Business Class if booked in coach.

The interesting thing about this however is that Delta isn’t even an official sponsor of Team USA, at least as far as the online registry shows. The only airline that is listed as sponsors is United Airlines and that under domestic. So why do the Olympians now fly on Delta? Well, United only has one flight from South Korea to the U.S. and that’s Incheon to San Francisco UA892. Bad schedule pals. Definitely not good enough to send people back home all over the country.

Don’t know what it is with these U.S. flag carriers but even when they get a golden opportunity spoon fed (literally) they manage to draw some bad PR out of it. Incredible!

I think Delta should do something for these guys. Sure that means some frequent flyers will probably miss their chance for an upgrade but hey, when did we win a gold medal for our country the last time?

In any case I wouldn’t be surprised if someone at Delta or at least the station manager in ICN has a change of heart. The Olympics are ending tonight and it’s been fun to follow the games. Let’s wish the athletes of the Paralympics all the best as well!