This must make the top rank of our Most Outrageous Passengers list since the inception of LoyaltyLobby: A Dhaka-bound Malindo passenger got undressed in flight and then engaged publicly in other indecent acts.

His actions lead to his immediate arrest upon arrival from Kuala Lumpur in Dhaka, the man is a Bangladeshi citizen enrolled in a university in Malaysia.

The videos, mostly cellphone clips, that started appearing on social media and Youtube right after the plane touched down are a mixture of disgusting, crazy and outright unbelievable wouldn’t the images itself be proof of what has in fact happened.

Free Malaysia Today (access here) reported that the man also attacked the purser of the flight.

A Bangladeshi man was detained after he removed his clothes and attacked a stewardess during a Malindo Air flight from Kuala Lumpur to Dhaka on Saturday.

The airline said in a statement posted on its Facebook that the disruptive passenger onboard OD162 was met on arrival by a security team and detained by authorities in Dhaka.

“The crew on board followed the standard operating procedures to restrain the passenger and causing any further disruption to the crew and passengers onboard,” the post said.

The Star Online reported that the 20-year-old man, who is said to be a student at a university in Cyberjaya, was alleged to have masturbated in his seat while watching pornography on his laptop.

Witnesses said the man had walked naked to the toilet and had also urinated on his seat.

The man attacked the head stewardess when he was asked to put on his clothes.

Other passengers then helped to restrain the man and tie his hands behind his back.

Needless to say plenty of people had their cellphone cameras rolling, giving us a glimpse of this episode of ‘unwanted inflight entertainment’.

You can find a collection in the following Youtube clip:

Malindo has the following to say on their Facebook page: 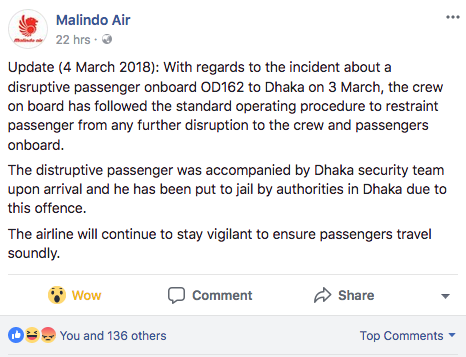 If he was able to do all this and nobody stepped in then there are legitimate concerns about the ‘standard operating procedure’ Malindo Air applies in such cases. Apart from the fact that he apparently attacked the purser on the flight you got to wonder what means the crew have at their disposal other than asking other passengers to help overcome an offender.

Something tells me that this kind of entertainment won’t be very much appreciated in a Dhaka jail. The good old saying ‘Don’t drop the soap’ comes to mind here.

I wouldn’t be surprised if this episode also considerably helps to speed up his exmatriculation from the Malaysian university in Cyberyaya where he is currently enrolled as per various media reports. He should never be allowed back on a plane, though I doubt Bangladesh has such a No Fly List in place. They could probably impound his passport for a while, at least there won’t be any flights leading that jail.