Hi Fly today confirmed what had already been rumored for months. The airline that offers wet lease services to airlines such as Finnair and Air New Zealand had acquired two used A380s that Singapore Airlines had returned to the lessor. 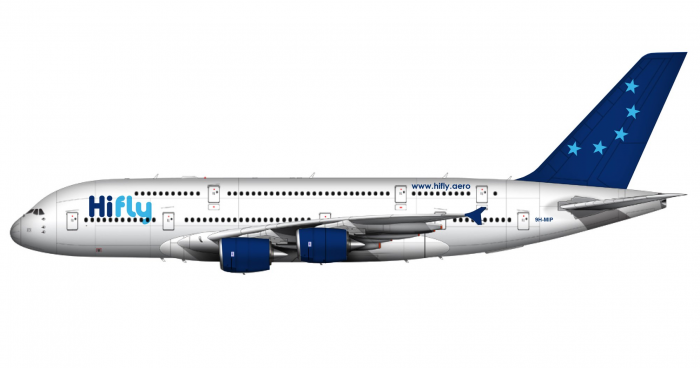 Hi Fly, an European Airline specialized in Widebody Aircraft Wet Lease to other airlines and governments on a global basis, is taking delivery of its first Airbus A380, the world’s largest and most spacious airliner. The arrival is a major event for the Company, making it the 1st Portuguese and the 4th European airline operating the model.

This first A380-841 will join Hi Fly’s fleet in mid-2018 and will be operating worldwide. According to president Paulo Mirpuri, “it is a very proud moment for Hi Fly. The Airbus A380 is the largest and most advanced airliner flying today and certainly the aircraft of choice for the most discerning air travelers. This acquisition has been part of our company’s plans for a while. We are extremely happy to welcome the first A380 to our fleet.”

The double-decker aircraft will be powered by one of the most reliable engines in the world, the Rolls Royce Trent 900 model, and will seat 471 passengers distributed between three classes. The main deck is fully reserved for Economy class carrying a total of 399 passengers while the upper deck has Business and First class seats carrying 60 and 12 passengers respectively. In a high density version, the aircraft can carry up to 868 passengers.

Hi Fly’s A380 will be equipped with state-of-the-art technology and truly luxurious cabin interiors. Each seat will have its own in-seat IFE system by Panasonic CX2 providing the passengers with great in-flight entertainment options and an optimized user experience.

Moreover, the performance of the A380 goes in line with Hi Fly’s environmental commitments. By producing only about 75 grams of CO2 per passenger kilometer, the A380 minimizes greenhouse gas emissions being capable of carrying more people with less impact on the environment. Apart from its incomparable efficiency, it also has the quietest and smoothest ride making it a true favorite for both airlines and passengers.

Hi Fly is the largest wet leasing specialist operating an all Airbus fleet. The EASA and IOSA certified and FAA approved carrier operates a fleet of 15 large widebody aircraft, mostly Airbus A330’s and A340’s, exclusively available for Wet Lease worldwide. Wet Lease – the supply of aircraft and crew, maintenance and insurance – is Hi Fly’s core business has been developed with unmatched operational expertise for over a decade.

NZ Herald run interesting story about this airline of which you can find an excerpt below:

New missions can come up at very short notice, and airline founder and president Paulo Mirpuri said this appealed to crew who worked for the airline.

”That is the attraction for pilots and cabin crew — the element of unpredictability of where we are going to operate. They can be deployed anywhere in he world,” he said.

”If a pilot or cabin crew wants to come and sleep back home every day, they are not a good candidate for Hi Fly.”

Missions included government work transporting officials or defence personnel, longer-term assignments of up to six years for airlines testing routes or unwilling to commit to long-term leases themselves, and urgent replacement of planes that may be out of action, as in the Air New Zealand contract.

You are normally in for a surprise when your flight has been switched to being operated by this charter/wet lease shop Hi Fly that has been flying rather old planes in the past.

Airlines have used them to cover situation when they are short in staff, employees are striking, planes are late to arrive from Boeing/Airbus or planes/engines need checks.

It is quite remarkable that charter operation can handle A380s and that there is need from customers outside of few hajj flights.