The very popular American Express Centurion Lounge network will soon (well, in 2019) get a new location at Denver International Airport (DEN) as AmEx announced in an interview with the USA Today. 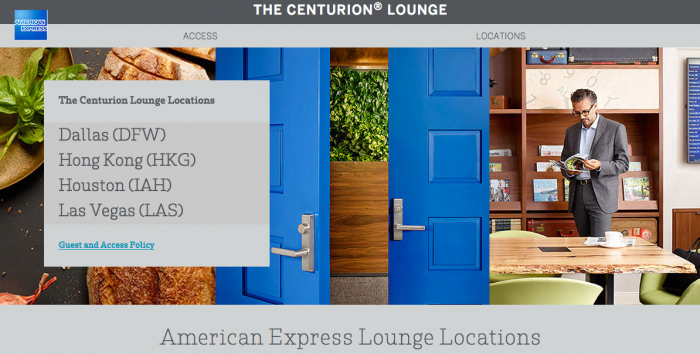 American Express currently operates nine Centurion lounges, eight in the continental U.S. and one at Hong Kong International Airport with the list being expected to grow.

The Amex Centurion lounge is available for American Express Platinum and Centurion Charge Card holders and subject to a specific guest policy (access here) as every other lounge membership.

Platinum® Card members who receive complimentary access may enter with up to two guests at no additional charge.

Centurion members may enter with up to two guests or immediate family (spouse or domestic partner, and children under 18)  at no additional charge.

Platinum Card and Centurion Members may purchase a day-pass for any additional guests for $50 USD at the time of entry. The $50 one-day pass for additional guests is valid at any location of The Centurion Lounge on the same day, as long as the guest is still accompanied by the Card Member.

Amex USA has recently raised the annual membership fee for it’s Platinum Charge Card to $550 per year (up from $450 previously, though still way below the international average) which allows access to these lounges that include decent food and beverage options throughout the day and evening hours.

When the membership fee was raised it came with the expectation of card members and promise from American Express to deliver additional benefits and it appears that they are making good on their promise in procuring more and more space at airports throughout the U.S. with Denver now being the next location in the making.

You can access the related news piece from USA Today here.

Denver will become the latest airport to get one of American Express’s luxe Centurion Lounge airport clubs.

The 14,000-square-foot Denver location ultimately will become the second-largest Centurion Lounge, trailing only a new 15,000 square-foot New York JFK lounge that’s expected to open in early 2019. The Denver lounge will be located in the airport’s C Concourse, with completion expected by the end of next year.

The lounges have been welcomed by frequent fliers, who have praised the clubs for their high-end aesthetics. The lounges are also not tied to any single airline or frequent-flier alliance.

Currently there are only nine Centurion lounges so maybe there is another one in the works that isn’t singled out here.

This is a rendering American Express published about the Denver location which looks posh and contemporary as their other locations:

Being unaffiliated with the airline can have a positive and negative effect as any type of assistance with the flight has to be performed by a regular customer service desk of the airline rather than having a dedicated members desk inside the club such as the Admirals Clubs, Delta Sky Clubs or United Clubs have.

The Amex Platinum Charge Card also comes with a complimentary unlimited Priority Pass for other airline lounges and since recently also a range of restaurants that give Priority Pass cardholders a F&B credit to use (don’t forget to leave a tip on the full amount of your consumption, at least at U.S. locations).

I really like the Centurion lounge in Hong Kong, San Francisco as well as in Dallas and Las Vegas. Not familiar with the other ones but they have always been pretty solid. I just wish they had more international locations such as at Frankfurt Airport or other locations in Asia apart from Hong Kong.

Many fliers and members criticize that Amex is lacking such facilities at big airports such as Los Angeles, Chicago and New York JFK but let’s keep in mind that these airports have multiple terminals that are pretty much separate from each other and putting a lounge there would pretty much only serve customers flying from that specific concourse.