Our Compensation Clinic this week makes a stop at the Hyatt Regency Osaka, Japan where I attempted to stay for two nights earlier this months but ended up walking away to a different property. 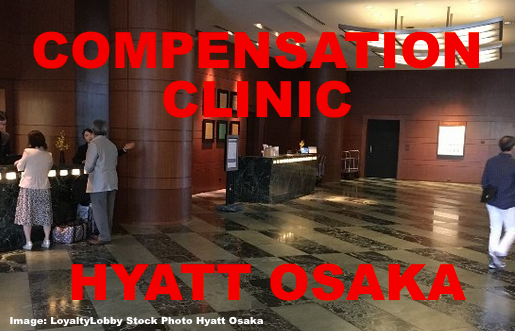 I stayed at the Hyatt Regency Osaka before exactly a year ago and the stay was chaotic as well including the fact they they couldn’t manage to open my bedroom window for the first three days of my stay. Back then I let it go without requesting any compensation and agreed with management that during my next stay the room would be prepared properly.

I returned to Osaka for 4 nights this year during cherry blossom season and two of these nights I was planning to spend at the Hyatt Regency.

When I arrived by shuttle bus from Osaka Station around 3:00pm I just dropped off my bags and took the bus back in the city (the location of the Hyatt is actually a total disaster in the middle of nowhere without proper public transport close by). When check-in in I confirmed that the window is opened to air out the room and that was confirmed to me.

At 20:30h we lined up with a huge number of other guests at Osaka Station waiting for the shuttle bus, already knowing that this won’t work as the shuttle is extremely small. I should be right, less than half the people waiting were able to go on this ride and the same happened again at 21:00h. The bus at 21:30 was finally able to get us to the hotel, arriving at 22:00.

I was already not in the best mood when talking to the totally uncoordinated front desk and requesting the manager. I asked them already to cancel the following nights stay and planned to leave the hotel in the morning. When reaching my room I noticed that the window was once again locked and nothing had been opened. The front desk then produced the same foreign manager I talked to last year who came up with some excuse saying they can’t keep it unlocked all the time and it was open earlier.

I asked him to cancel the stay for the same night as well and organize a way to get me back to the city (at Osaka Station there is an Intercontinental, a Hilton as well as a Conrad hotel). He mentioned the maximum that could be done is calling a taxi and the hotel wouldn’t pay for it. I then contacted the Hyatt Concierge that Globalist members now have assigned to their accounts.

While my concierge was on holiday I reached another lady who was helpful and said she would take care of the reservations to be refunded and I should take a taxi which Hyatt would reimburse later.

I did just that and got out of there, making a reservation with IHG. The taxi wasn’t exactly cheap.

The charge came to roughly US$55 (5790 JPY) per the receipt which I then sent to the Hyatt Concierge.

I called the same lady again and she offered to either reimburse it to a credit card or to credit me 15,000 Hyatt points instead. I decided that 15k points were a significantly higher value than the 55 bucks and accepted the points.

This Hyatt Regency Osaka is really a property from another star in the most negative sense. It’s only a category two property but all of the staff you interact with there appear totally confused and unable to comprehend even the most basic requests.

I’m satisfied with the way Hyatt Concierge handled this problem to get it out of the way even though I didn’t do myself a favor staying at the more expensive IHG property instead of burning 8,000 Hyatt points. I sometimes prefer to take my losses though and just walk away.

The hotel itself (structure) isn’t exactly horrible but the location and the service most certainly is and I really can’t recommend it now the second time around. Better choose a local branded hotel around Osaka station or elsewhere in the city that leaves you some options to venture around the city longer in the evening and with less hassle overall.