This week the Whine Wednesdays deals with how tourists have destroyed and commercialized the alms giving ceremony in Luang Prabang by simply not following the provided instructions.

I was in Laos last week and was working early in the morning at the 3 Nagas (MGallery) when I was wondering why so many other people were up (it was 530AM). The alms ceremony was about to start.

The purpose of this “alms ceremony” is to monks from nearby monasteries to basically collect food (alms) from Buddhist worshipers.

One of the temples had the following instruction:

So, you should not take part to this ceremony unless it is meaningful for you and you can do it respectfully.

Seems that most tourist do this merely to get the “perfect shot”:

Instead of standing on the other side of the road, most of these people were just taking photos right in front of the monks.

What happens to these “alms”: 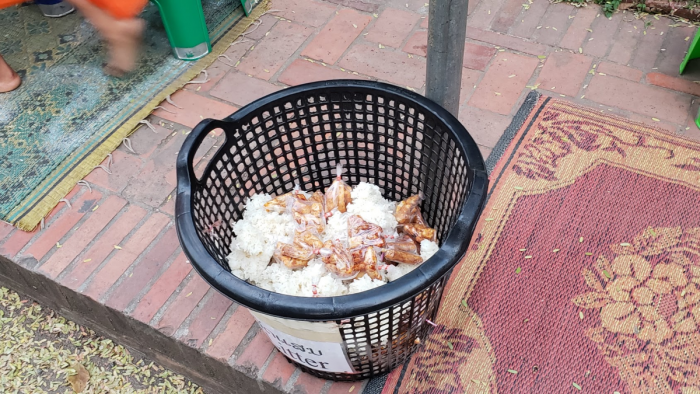 Some get recycled immediately. At least the rice was not thrown away to these bins but not sure if the monks are really eating them considering  how many people have used their bare hands to put it into their jars.

Please note that the alms giving ceremony is one which, while picturesque, is not without its detractors. Unscrupulous local merchants have used the eagerness of tourists to participate in a local tradition as a means of making easy money, and sometimes sell unsuitable, stale and even unsafe food. This has resulted in monks falling ill after having consumed the offerings, and resistance to continuing the tradition. However, the government has made it clear that the monks have to continue the tourist pageant or risk being replaced with lay people clothed in saffron robes in order to keep up appearances, and thereby maintain tourist revenue.

It was certainly an interesting ceremony and more sane outside the most touristy area of the city center (where they buss all the tourists) that is cordoned off in the morning. It was just sad to see these monks walking and collecting these “alms” that were soon recycled to bins few meters down the road.

Not sure why people are so addicted to get their face on every photo so that they cannot follow these simple instructions to keep this ceremony serene and what it is meant to be?

Seems that the local government may force this circus to continue because it keeps the tourists coming and must inject significant amount of money to the local economy.