Carlsbad, CA based Cal Jet Elite Air has announce with one day advance that they are suspending all flights effective April 18th and would ‘restart’ the airline with old and new routes beginning late June. 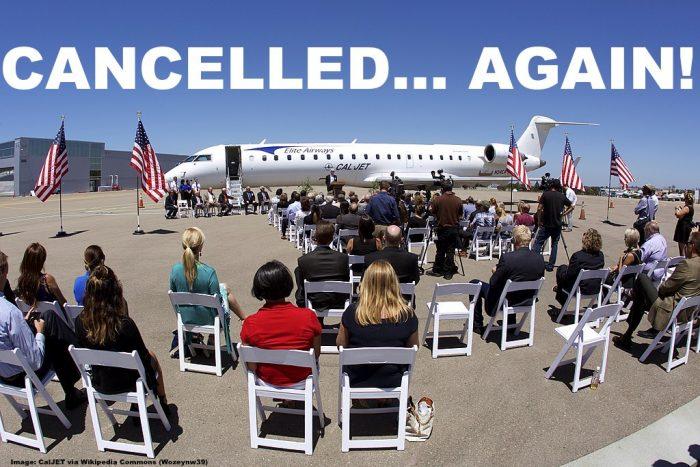 The airline has just recovered from their previous service suspension and suddenly they come out with the next, this time for at least two months. It’s almost like their planes are on the ground more often than in the air.

I first saw the following article on ABC10 (see here) where customers complained about the cancellations.

Kelly Skemps was scheduled to fly from McClellan-Palomar airport to Las Vegas on Friday for her brother’s 50th birthday. But Thursday morning she got a call and a text alerting her that her flight had been canceled. …

Cal Jet bills itself as an easy and competitively-priced flight option from North County to Las Vegas. But this is the second time the small airline has inconvenienced customers by cancelling flights and blocking out their schedule.

When they finally resumed operations in March, Wozniak told 10News, “we feel very confident going forward that we have the extra crew and airplanes necessary to fulfill that travel mission for these people.”

Cal Jet did not respond to a request for comment after the latest round of cancellations, though a customer service representative attributed the problems to a lack of “aircraft and crew availability.”

Cal Jet posted the following notice to their customers on the companies Facebook page (see here): 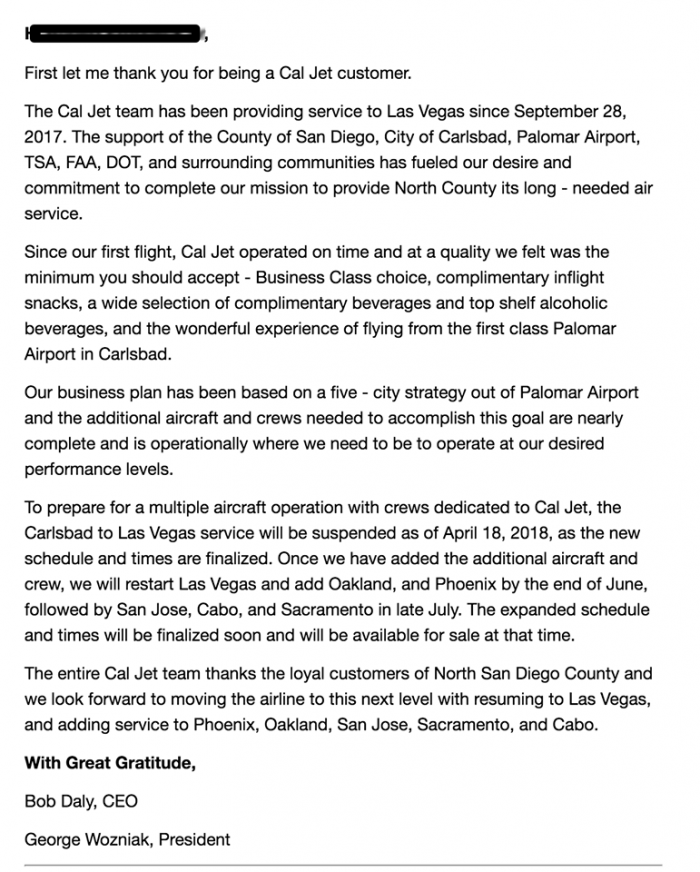 It’s a tough call to really believe that Cal Jet will actually make a comeback sometime later this summer and especially, which customer is going to risk booking them just to get burned again?

There is also no notice on the website whatsoever. All Cal Jet Did was disable the booking engine which no longer lists any origins / destinations.

Passengers who got their flights cancelled should apply for refunds with the airline directly (the company isn’t insolvent so any refunds should be processed properly) and possibly consult their travel insurance if any exists for compensation claims.

Cal Jet has an interesting concept with premium inflight services and using a regional airport with short ways instead of a large terminal, however the biggest part of any airline is reliability and unfortunately the company hasn’t proven itself in that area. Quite the opposite.

Today’s Airfare of the Day goes to Qatar Airways and their midweek business excursion round trip fares between the Japan and Europe. Remember that you...