Last week I wrote about the popular Starwood SPG American Express Card which in August is getting ‘modified’ and will come with a free anniversary night for folks whose renewal date is after August 1st. 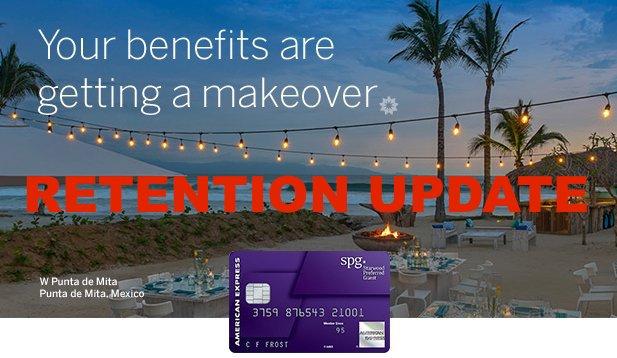 Since then I have gathered some more information and also contacted Amex myself to ask for a retention offer as my renewal date is coming up in 2 weeks prior to the new rules.

As I wrote previously (see here) I was always quite happy with the SPG Amex and so have been most folks I knew who had this card for years but this change is probably going to turn off a lot of loyal Amex customers depending on their situation.

American Express sent out an email about the changes a few hours ago and you can access them here as well.

We also has a few comments on that last article about the SPG card so I decided to write this update today to maybe clear something up as I got a few conflicting answers from Amex representatives when I called.

Right off the bat: If you’re in the same situation as I was and consider cancelling your card then you should call the Amex Retention Department at 1-800-452-3945.

The new annual free night is indeed a great benefit, however the cut off date is August 1st 2018 and one will only get this free night if the card member anniversary is AFTER this date. That means if you got your card in July of 2017 then in 2018 you will be dinged for the full annual fee, receive less benefits from the card itself and get nothing in return for 13 months.

I made this argument to the representative and said I’d have no problem paying the $95 for my card if I get the same benefit as these customers renewing after August 1st. The first agent said all he could do is offer a $100 statement credit after spending $2500 on the card which I declined. I requested a callback from a manager at a later point which happened the following morning.

I explained my position again and also mentioned that I actually used the card over the past year and it’s not something I throw in the drawer and only got for the signup offer (I charged ~ $11k to the SPG Amex during the last 12 months).

The manager then offered to credit me 10,000 SPG Points if I spend $1000 during the next 30 days and I accepted that offer. He mentioned this is the highest Amex offers for the personal cards. 10,000 SPG points will transfer to 30,000 Marriott points.

Based on some quick research I did online people were so far offered different retention options:

There is really no set policy what they will offer callers. Based on some online posts most people seem to get offered 7k points for $500 spend. Obviously the Amex representative has access to your card related data in term of what you spent with the card and will make a decision based on that. Someone who actually uses the card will likely get a higher offer than someone who never made a purchase with it.

The first agent I talked to said ‘maybe Amex will change it’s policy’ regarding the free night and I should call back in a month or two but I wasn’t in the mood to keep this in limo even longer and pressed for an instant solution.

This wasn’t so much a retention issue for me as more a matter of fair treatment. It makes no sense that someone who renews in August gets a free night and another customer who renews in July gets jacksh#t. In my case the solution offered is acceptable. I’m spending the $1,000 either way and 10,000 points can be as much as 3 free nights at low priced SPG properties.

Have you asked for and received a retention offer for the SPG Amex? Post yours below!