Our Whine Wednesday this week is about a seating problem that can happen from time to time depending on the aircraft, namely that your window seat might not actually have a window.

If you experience something irregular, remember that you can always email us, send a message via Facebook or use Twitter and include photos too. We’ll try to cover a Whine Wednesday case once a week.

It’s pretty annoying if you ask for a window seat and then you find yourself at a wall – without a window.

That’s what happened on my Lufthansa flight from Frankfurt to Bangkok last week where the airline has now switched back from A380 to an Airbus A340-300 with Business, Premium Economy and Economy Class. I was booked in Premium Economy and selected seat 14A which is the last row. 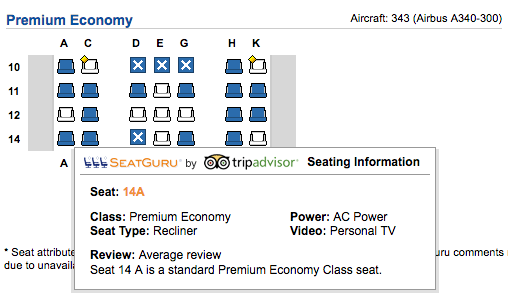 I checked the cabin configuration beforehand on Expertflyer and didn’t see any anomaly noted on there. Neither did the Lufthansa online check-in have a notification and the lady at the Check-In counter in Frankfurt didn’t say anything either.

This happens from time to time and I’ve seen it before as well, hence why I try and double check carefully before selecting the actual seat because depending on the aircraft you can be really unlucky and the first row in Lufthansa Premium Economy on the A340-600 and A340-300 is pretty awful as well with pretty much zero legroom and stretching ability:

This was the first row of an A340-600 on ICN-FRA where stretching legs is absolutely impossible:

Really anything but Premium in Lufthansa’s ‘Premium Economy’ at least for people who book it for the purpose of extra space.

A window seat is nice because you have nobody climbing over you and there is a but extra space to the side because the window is build inward. When there is simply a solid wall it takes space away and is simply uncomfortable. Plus the obvious: You can’t see outside (not that there is much to see during a night flight but whatever).

Airlines should really update their seating charts properly and make it visible for passengers that there is a lack of legroom or no window on the different aircraft types.