As major airlines are gradually retiring their old work horse the Boeing 747 from their fleet, Qantas made an announcement that they will also see the plane leaving by 2020 after 49 years of service. 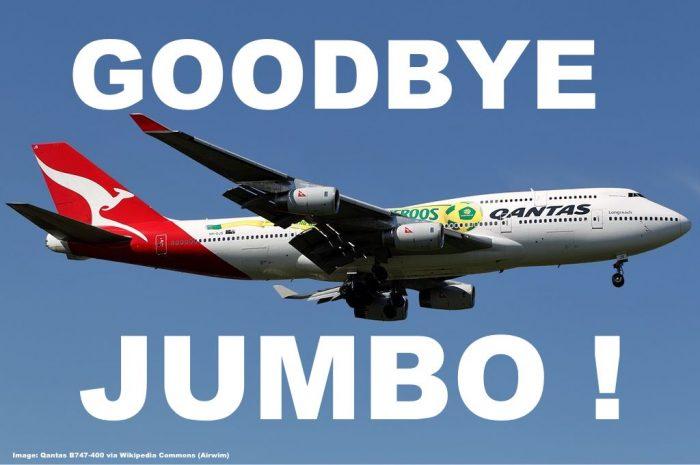 The 747 is still the most iconic aircraft ever built and probably the best design apart from the Concorde which is already out of service since October 2003.

Qantas had every model of the Boeing 747 in it’s fleet that left the factory since 1971 when it was first put in service. It now coincides that a more popular Boeing aircraft, the 787 Dreamliner, will mark the retirement of the 747.

You can read Qantas press announcement on their website here.

Qantas has today announced an order for six additional Boeing 787-9s to fly on its international network, bringing its fleet of Dreamliners to 14 by the end of 2020.

The arrival of the new aircraft will enable the airline to accelerate retirement of its last six Boeing 747s – an aircraft type that has been in its fleet in various forms since 1971.

Qantas Group CEO Alan Joyce said the announcement was an important moment for the national carrier.

“This really is the end of one era and the start of another. The jumbo has been the backbone of Qantas International for more than 40 years and we’ve flown almost every type that Boeing built. It’s fitting that its retirement is going to coincide with our centenary in 2020,” Mr Joyce said.

“Over the years, each new version of the 747 allowed Qantas to fly further and improve what we offered passengers. The Dreamliners are now doing the same thing.

“The 787 has better economics and a longer range, and its already opened up new routes like Perth to London. With a larger fleet of Dreamliners, we’ll be looking at destinations in the Americas, Asia, South Africa and Europe.

“By the end of 2020 we’ll have farewelled the 747, finished upgrading the cabins of our A380s, and welcomed our fourteenth 787. That’s a great proposition for our customers and creates some really exciting opportunities for our people,” added Mr Joyce. …

There are currently ten 747-400s left in the fleet and these will be steadily retired between July this year and the end of 2020. Qantas received the last of its 747s new from Boeing in 2003, which will be 17 years old at time of retirement.

Large four engine jets such as the B747, A380 and the older A340 became increasingly unpopular with the airlines in recent years with the exception of carriers like Emirates that largely depend on hub traffic and can still manage to fill the A380 seats.

Boeing has announced more than once that they will stop production of even the new B747-800 if there is no more demand for the aircraft which sounds like a logical decision. Nostalgia aside, the Boeing Company is a business with shareholders and has to do what makes financial sense. So far there have always been some customers who saved the program in the eleventh hour and put new orders in.

Mark 2020 in your calendar and follow the Qantas news if you want to go on the ‘last voyage’ flight of the QF 747. Singapore Airlines and also United last year have both build an event around this occasion.

Qantas Mystery Flights Make A Return This Spring With Departures From BNE/MEL/SYD – Book From March 4th!