Primera Air started their transatlantic operations on April 19, 2018 using a wet lease from National Airlines due to a delay in the delivery of their first Airbus A321neo. Last week they finally started operations on their aircraft (registered with tail number OY-PAA).

Yesterday, I flew on their economy class product from London Stansted (STN) to Newark international airport (EWR), and here are my impressions of the flight.

Probably the part I disliked the most about this flight is that it was out of Stansted airport, house of Ryanair, TUI, Thomas Cook and a miriad other low cost airlines. This airport is far from London (or should we say, close to Cambridge) and it’s difficult to connect to from other European points unless you fly Ryanair (which was what I did). Also, security control is a nightmare!

Being a small aircraft (204 seats in total), they had 3 check-in counters available for passengers. There was no priority check-in line for the premium economy customers. The total check-in process took me about 15 minutes.

The A321neo (for New Engine Option) is the latest iteration on Airbus single-aisle classic jetliner with a range of up to 4000 nautical miles. On Airbus words, the new A321 generation “is ideally suited to transatlantic routes, and enables airlines to tap into new long-haul markets that were not previously accessible with current single-aisle aircraft”.

These long-range single-aisle jets are definitely called to transform the north-Atlantic market. The range is ideal for USA East Coast to Europe crossings:

The slight inconvenient: these aricrafts are slower than wide-body jets. The A321neo comes with a cruise speed of 514 mph. Comparing this with the cruise speed of an A330 (541 mph) or an A380 (564 mph), it makes for some extra time up in the air. This flight took 8.5 hours, while a regular wide-body flight between London and New York takes about 7 hours. 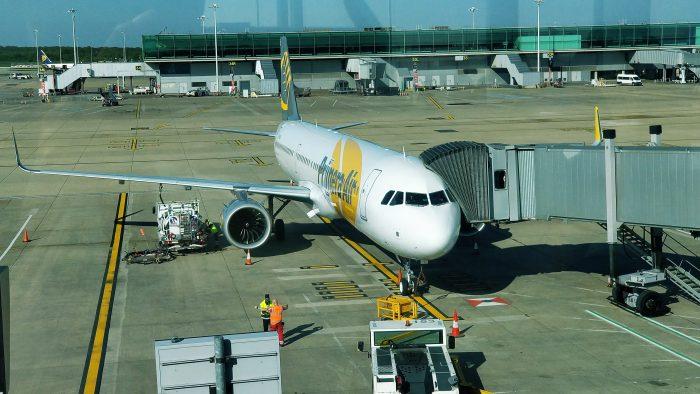 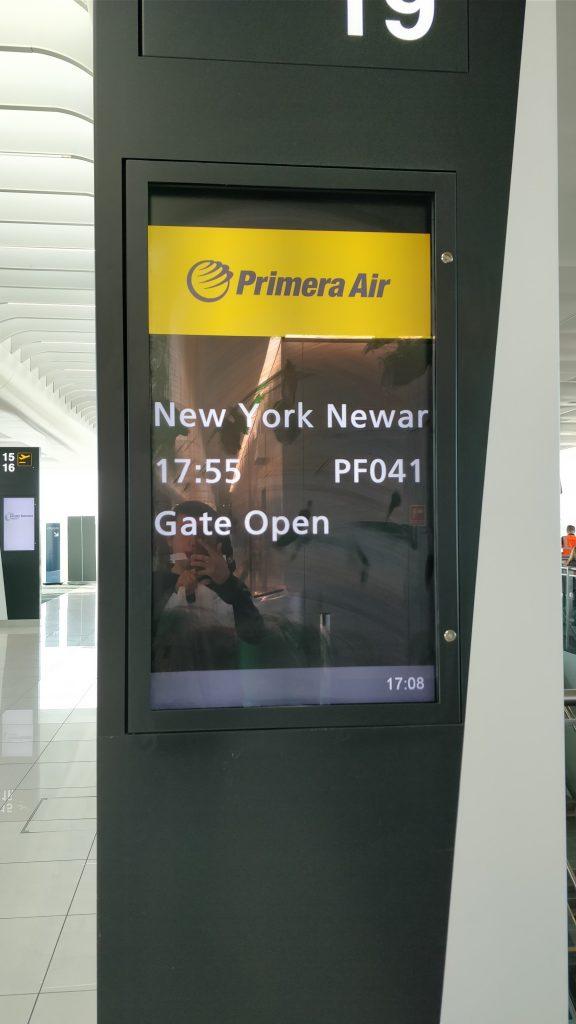 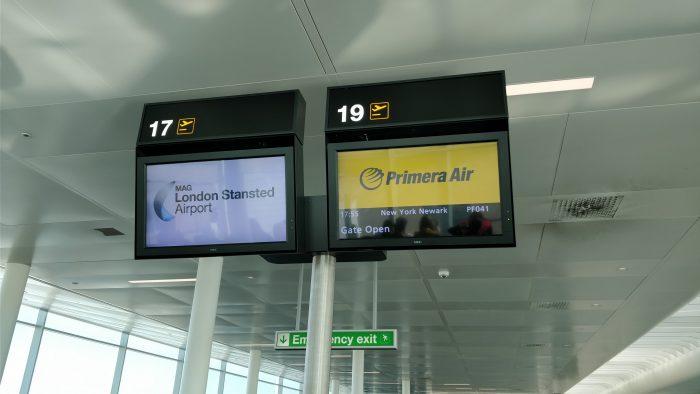 On their website, Primera Air offers 3 different seating options for economy class: standard, XL and Exit (XXL). The XL section comprises rows 5-8, standard seating goes from row 10 to 36 and exit (XXL) seats are on row 9 and 22.

The only advantage of being SSSS’d is that I got to board the aircraft first, so I could snap some good pictures of the empty cabin. 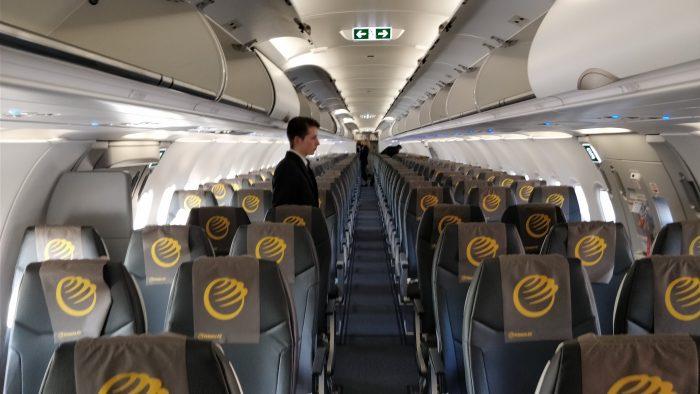 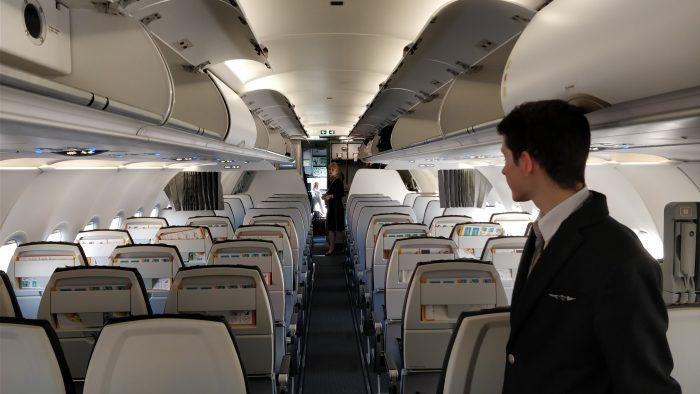 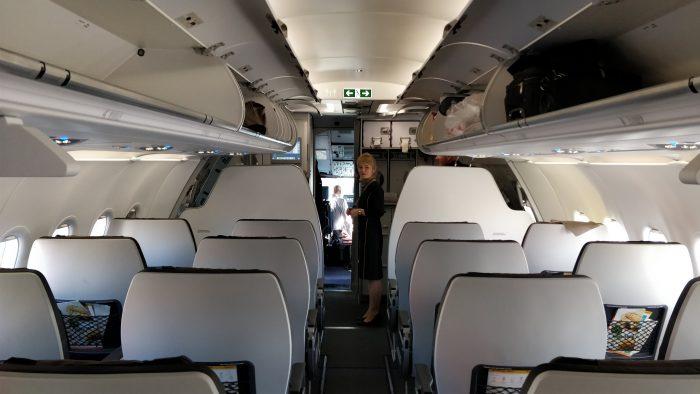 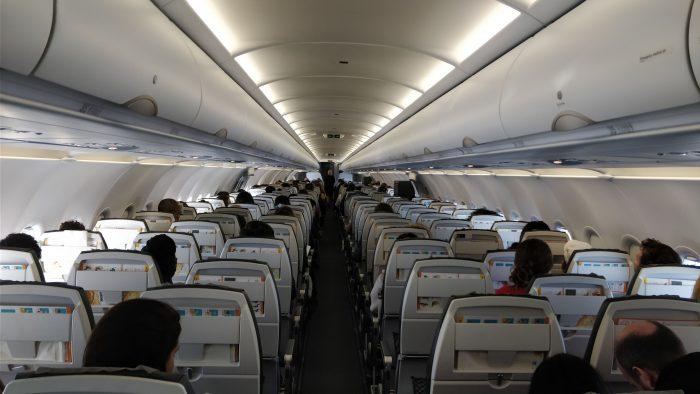 The seats are the standard slim model that is becoming more and more popular among all type of carriers, from legacy to low-cost. They were not generous in cushion but they were not uncomfortable. Recline is very limited and they don’t come with head rest or head support. 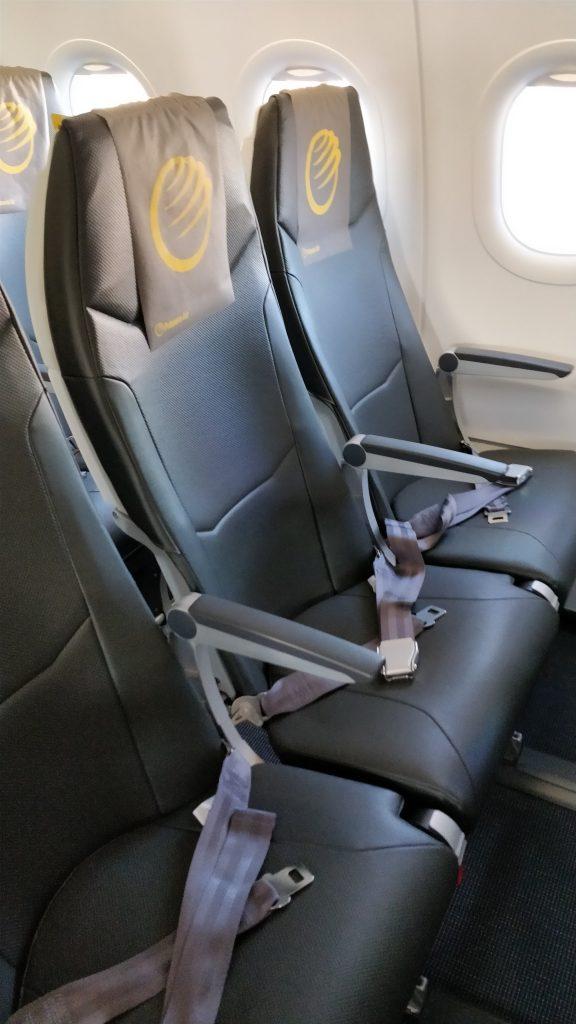 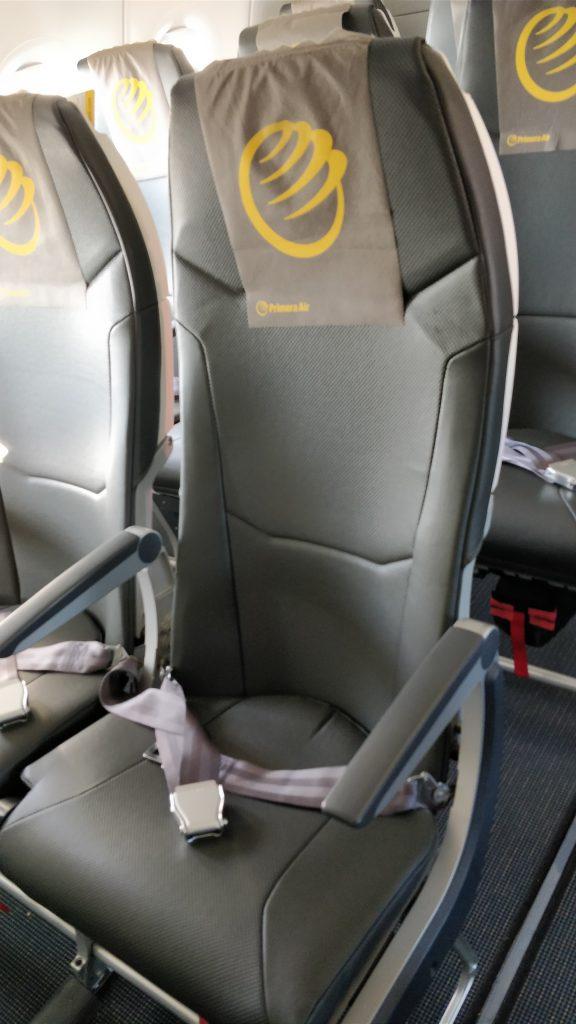 Economy seats come with 18″ width and 30″ pitch. According to the crew, there is no pitch difference between the regular economy seats and the XL seats on rows 5-8. I think there might be an extra inch on the XL seats. I will let you judge by yourself:

There is one lavatory in the front and two in the back of the cabin. There is no exclusive use of the front lavatory for premium economy passengers. 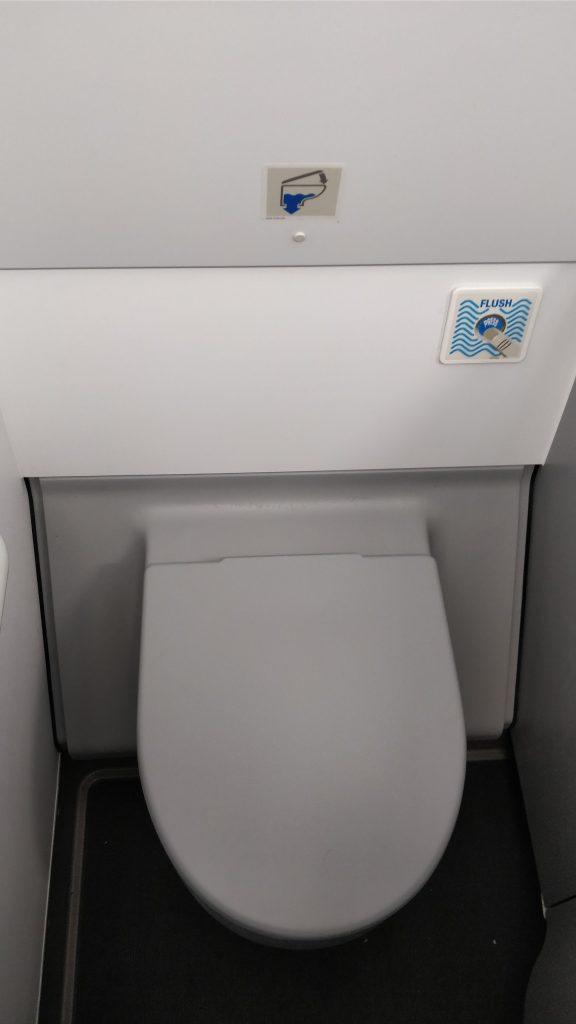 BRING YOUR OWN IFE!

There is no in-flight entertainment in this aircraft. There where you’re used to find your individual screen you will find a pocket with the safety card and the food menu. 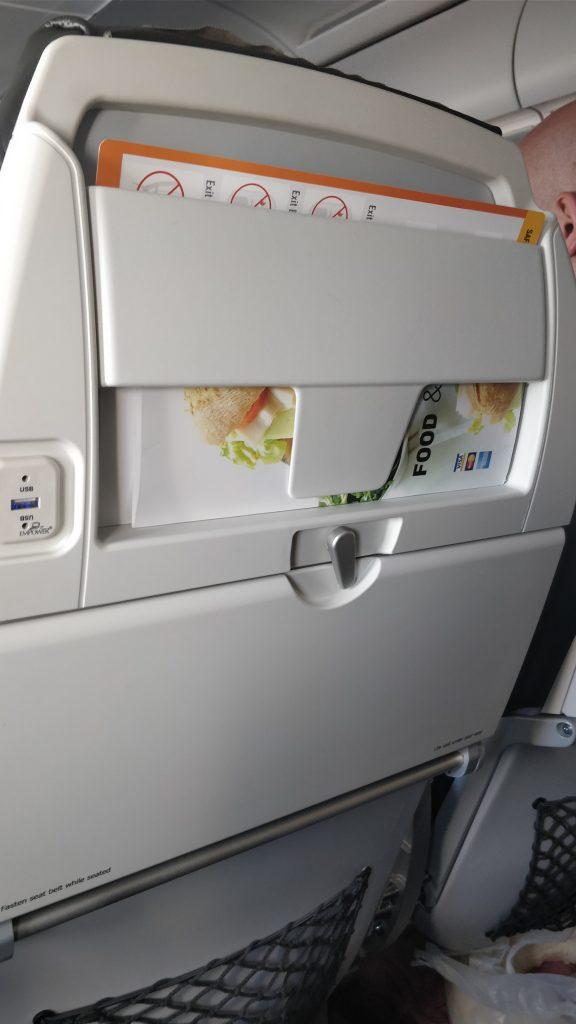 So, bring a book, crosswords, a sudoku app, or bring your tablet and pre-download some shows in Netflix. There is no internet available during the flight.

Each seat comes with an USB port, at least.

Food options for purchase on board are limited to sandwiches and snacks. Prices are decent. 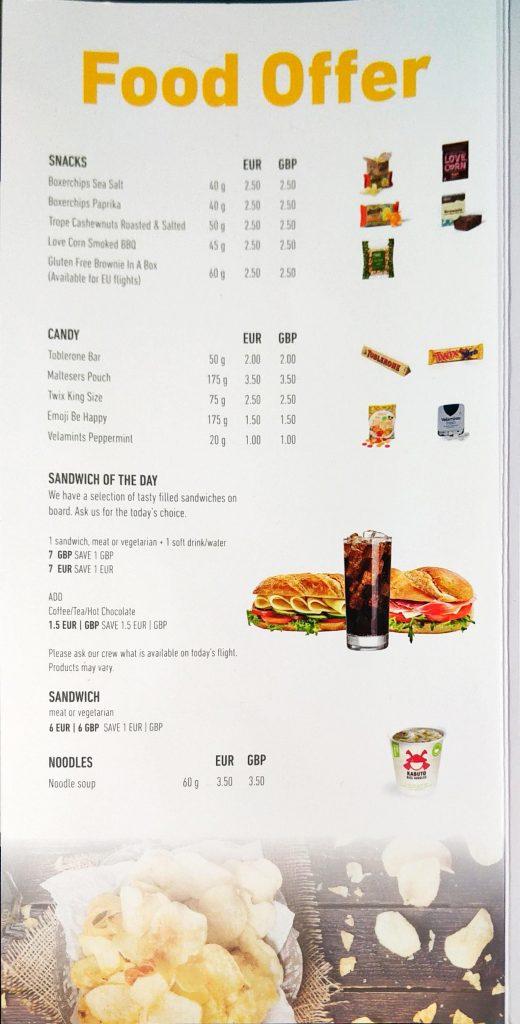 I went for some snacks and drinks: 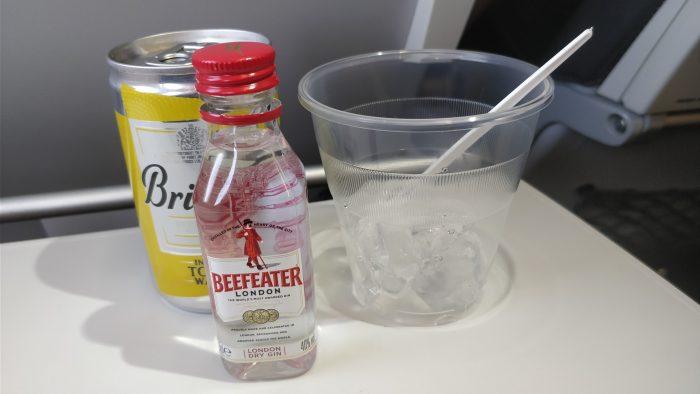 I had also pre-ordered a hot meal when I booked my ticket. The hot lunch meal comes with water or coffee/tea, and any extra beverages must be purchased. The food was OK, nothing spectacular. 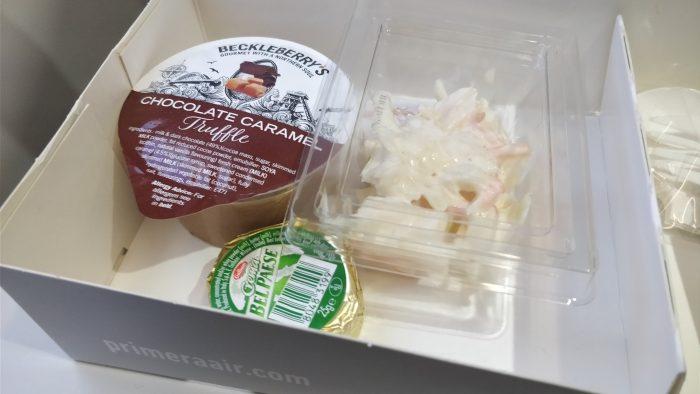 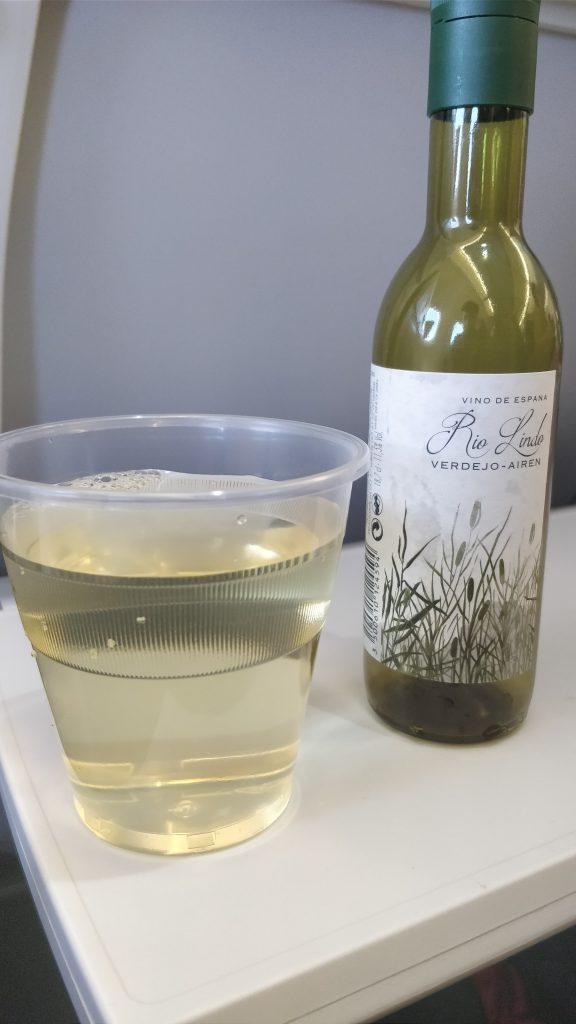 Or you can bring your own food on a Tupperware, of course:

Some pictures from up in the air: 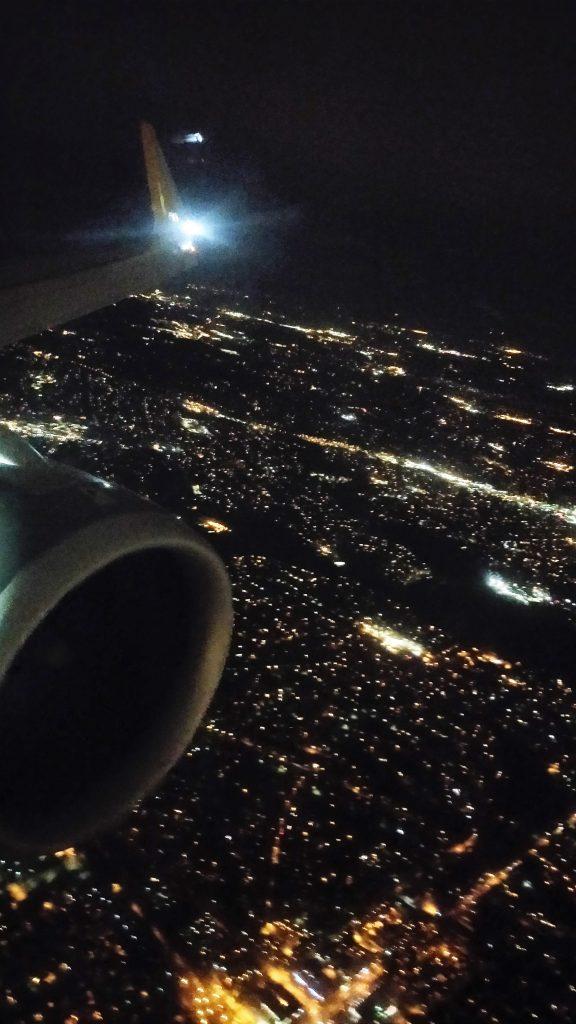 With fares starting at GBP 149 for a one way ticket (sometimes even cheaper departing from the US)   you get what you pay for. The trip was a bit long and it can be boring if you don’t bring your own entertainment, but the seats are not that uncomfortable, and the overall service is good. I had a nice crew which made it a lot more bearable.

These single-aisle aircrafts are going to be the future of north-Atlantic air travel. My impression was that the reduced amount of people gives you a different sensation than when traveling on a wide-body jet. Having an empty seat next to me also helped a lot on that aspect!

Tonight I fly back on their Premium Economy product, so expect a full review of it tomorrow!