Budget Carrier Germania had an ugly surprise for passengers who were schedule to fly from Berlin-Schoenefeld Airport to the Greek island of Rhodes: The plane made a stop at Berlins second airport, adding several hours to the journey. 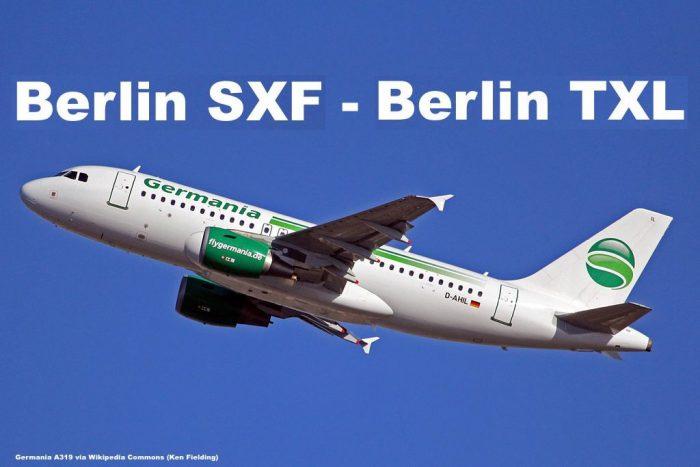 When contacting the carrierahead of time they declined the passengers request to embark at the second stop, instead they had to go to SXF airport and then do the loop flight to TXL and sit around for over two hours.

40 Minutes to fly from Schoenefeld to Tegel? Wow! Intra-Berlin flights post the cold war period. How does that look like on Flightradar24 ? 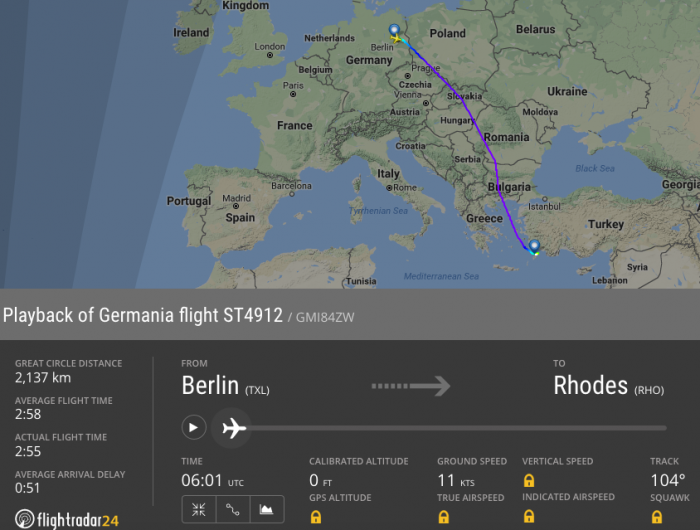 The passengers got this information before they got to the airport and it’s not entirely clear when they were informed about this. Flightradar shows ‘diverted’ for the SXF-TXL segment but why the two flight numbers and why is a diversion known in advance?

Germania does operate flights from both Schoenefeld SXF and Tegel TXL however they did not permit passengers to go to Tegel to save a few hours sleep. Everybody had to go to SXF to be checked in there which was likely super annoying for the passengers but also a unique experience, though I can definitely feel that not everybody would appreciate it.

When I look the flight history of ST3602 up it’s really weird. They change aircraft type and scheduled departure time every week but it appears like the scheduled departure for the first flight was 05:25am and the flight usually takes 3 hours. Plus 1 hour time difference on top means they land 4 hours later, putting the schedules arrival time of this flight at about 9:35am.

ST4912 where the passengers were transferred to landed at 12:04pm so it’s 2:29h late on a flight that has a distance of 2,137 km which is a category two flight for purposes of EC261/2004 compensation. It would typically require a delay of 3 hours to be eligible for a full 400 Euro compensation, however in this case the following provision of EC261/2004 applies:

… Where a passenger has been rerouted due to cancellation or denied boarding, the above amounts are payable if the passenger’s actual arrival time is delayed beyond the scheduled arrival of their originally booked flights, by two/three/four hours for type 1/2/3 flights respectively. But if rerouting only delays the passenger by less than these thresholds, half of the specified amounts are payable as compensation.

Based on this all passengers that were booked on SXF-RHO and were now rerouted through TXL are entitled to 200.00 EUR EU compensation by Germania.

Hard to say where and when this document was obtained but it looks like an airport printout and was likely issued prior to departure. The circumstances of this ‘diversion’ are not clear and if there was an in air emergency then I’d say EU Compensation is not due based on extraordinary circumstances.

If the shuttle has been scheduled prior to take off for whatever operational reason then the payment is due. But if the airline declined passengers to check in at TXL that means this must have been known beforehand so what’s going on here?