There are few unintended consequences when airlines started to move crediting flights based on the price paid rather than miles flown like the example below that a reader sent me. He had received more SkyMiles for the Delta’s Bag on Time-promise than the transcontinental flight itself. 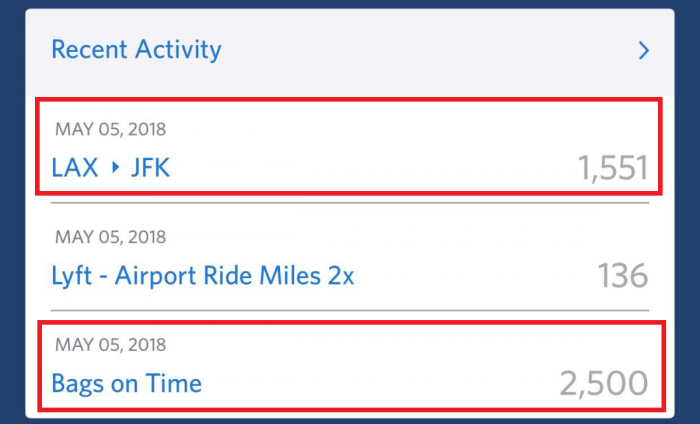 Few days ago, I was booking a SkyTeam premium fare (heavily discounted) and it was going to be credited to Flying Blue. I got info to book it under AF/KL codes but I told that it would make more sense to book it under DL because then the miles earned would not be based on the fare paid but rather miles flown.

Here are the issues:

2. How you earn miles for partner flights varies between the airlines United, American and Delta (United credits 016 ticketed per $$$ regardless who operates)

3. The number of miles earned for inexpensive flights is really abysmal

4. You may earn fixed number of miles for “consolidator” fares that far exceeds the miles you had earned for the price paid otherwise (airlines don’t want you to know how much the consolidator really pays for the fare and the airline is not aware how much YOU paid)

The reader flew on a negotiated economy fare (didn’t buy himself) and the miles earned above are for a Diamond member.

The airlines haven’t (yet) figured out a way to award miles for partner flights based on a price paid (unless they are the ticketing airline) and thus need to revert to do it based on the miles flown. This means that you often earn a lot more even on discounted business fares if you choose to fly on partner. Doesn’t make much sense, does it? Frequent flier program actively discourages to fly the airline itself?

I would say that the airline loyalty for the most part have come to an end. I have lifetime status with both Star and Oneworld that helps if I am in economy. If you are in business, it doesn’t really matter which full service airline you are on (between the quality ones).