Another day, another strike in Europe and today it’s once again Italy where air-traffic controllers and ground staff are walking out, causing hundreds of flights to be cancelled. 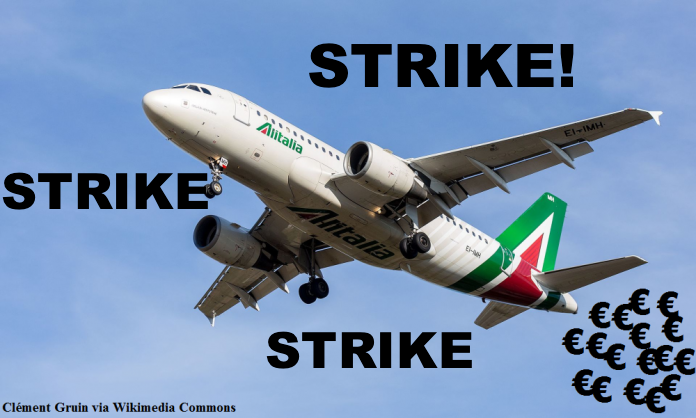 Europe’s aviation sector is plagued by strikes not only in this this but the most recent years as well following disputes about pay, benefits and job security at both airlines and the employees of air traffic control (public sector).

These strikes have steadily increased and by now exposed how weak the aviation sector in Europe is as far as reliability is concerned.

You can access more details about the operational situation from the website of the respective airport of your departures/arrivals in Italy or the airline you’re scheduled to fly on.

The Independent (access here) also has an article this morning explaining a bit of detail related to this latest strike action.

More than 100 flights between the UK and Italy have been grounded on Tuesday ahead of a strike by air-traffic controllers and ground staff. Over 20,000 passengers have seen their journeys cancelled.

The controllers are walking out between 10am and 6pm, Italian time, in protest against privatisation plans. At the same time, a wider series of stoppages are taking place at airports across the country. Ground staff are engaged in a long-running pay dispute.

While intercontinental flights to and from Italy, overflights and some services to and from the Italian islands are unaffected, many short-haul departures will be delayed or cancelled. …

The troubled Italian national airline, Alitalia, has cancelled a total of 230 European flights, including six between London City and Milan and four between Heathrow and Rome. …

“Public transport to and from airports could also be affected by the national strike, so please allow extra time for your travel plans before and after your flights.” Transport workers in Turin, Ancona and Rome are stopping work.

It might be a good idea to closely monitor the flight status and possibly postpone any non-essential travel today for which airlines are usually offering travel waivers to set aside ticketing conditions and penalties.

The situation in Europe is simply frustrating. The airlines schedules have become like Swiss Cheese and we’re not only talking about carriers in Italy or in recent days Air France but it’s well known that British Airways and Lufthansa also had tremendous problems with strikes in the recent past.

The blame is usually impossible to be shifted to one side alone but especially Italy and France are well known for their rough style when it comes to labor action and they have no reservations in holding the companies as well as the public at ransom for their often outrageous demands. On Sunday, French minister Bruno Le Maire warned Air France could “disappear” as a result of recent strike action and the impact on the company.