J.D. Power today released their 2018 North America Airline Satisfaction Study for the 14th year. The study is based on responses from more than 11,000 passengers who flew on these airlines between March 2017 and 2018. 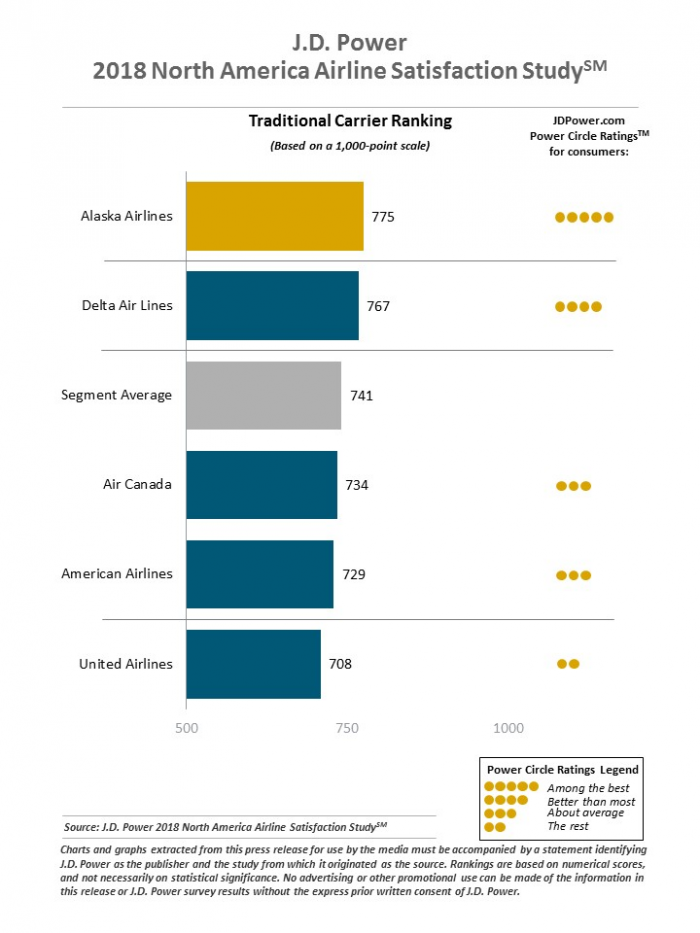 The survey results shouldn’t come as a surprise to anyone. Alaska Airlines and Delta are leading the full service segment and Southwest Airlines and JetBlue the low coast one.

Here’s the chart for the low cost airlines:

And here’s the press release:

“With a single exception, airlines in North America show consistent improvements across all the factors, from booking a ticket to handling luggage,” said Michael Taylor, Travel Practice Lead at J.D. Power. “Operationally, it’s never been a better time to fly. Passengers perceive greater value in ticket prices, checking in has never been easier, passengers are more satisfied with the actual aircraft and airlines have improved their baggage-handling performance.

“The exception is in the in-flight services factor, which includes food, beverage and entertainment systems,” Taylor added. “Today’s passengers expect trouble-free connectivity for personal devices and airlines are challenged to keep pace with the technology that can achieve that goal. This is important because passengers are far more likely to have a positive experience with an airline if they are entertained during their flight.”

Following are some of the key findings of the 2018 study:

Among traditional carriers, Alaska Airlines ranks highest for the 11th consecutive year, with a score of 775. Alaska Airlines performs particularly well in all seven factors of the study, with a great deal of improvement coming from investments in new overhead bins that fit roll-aboard bags better than traditional bins. Delta Air Lines (767) ranks second.

Among low-cost carriers, Southwest Airlines ranks highest for the second consecutive year, with a score of 818. Southwest Airlines performs particularly well in all seven factors, driven in large part by investments made in fleet improvements. JetBlue Airways (812) ranks second.

United is still dead last on the full service segment at the same numerical level with Frontier and Allegiant.

You have to keep in mind that this survey was done within the general population of which many must not hold any status. I would say, however, that the results are indicative of the level of customer service you can expect to receive from these airlines.