Our Fabulous Friday this week is about the very flexible Same Day Confirmed option United offers within 24 hours of the original bookings departure.

United displays the option to change the originally booked flight as soon as the online check-in opens and passengers can continuously modify their routing and also check back occasionally if better options become available.

In my case I had booked an extremely cheap L class Economy ticket from Las Vegas to Los Angeles ($42 fare all in) and even as a lowly United Premier Gold was fortunate enough that the flight was actually upgraded ahead of time to First Class roughly 30 hours before the flight.

This was my original flight this morning:

And here are some options United offered me on the app yesterday afternoon: 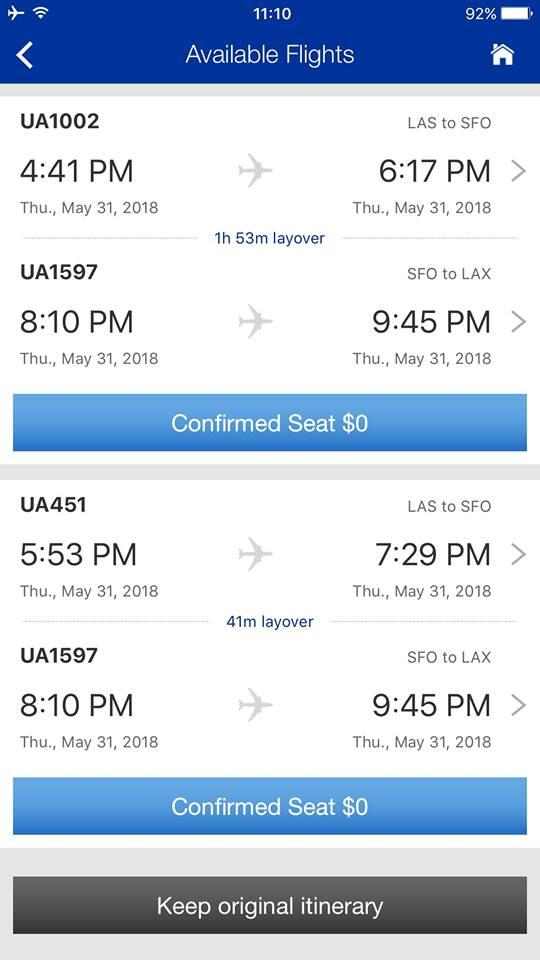 What was interesting about this is that all flights actually confirmed into First Class (RN – Upgrade Space) which would make it quite comfortable to hop around in first and literally milk the heck out of that $42 ticket. I wasn’t really interested to do this today since I only have the weekend in LA and some things to do,

I was briefly interested however to use the option of moving the flight to Saturday morning 6am which has also been offered. However after a second thought I decided against it as that means getting up at 4am and no, that’s not how i want to start my day.

Depending on the fare this could be a good way to accumulate many additional Elite Qualifying Miles (EQM). Crediting to United MIleage Plus where the actual award miles are credited based on the fare there wouldn’t be any gain in that regard. Still amazing that United let’s you ping pong around all over the country but yes, this is nothing new and has been around for quite some time.

It’s also very useful to actually change to later flights especially after having originally booked a somewhat inconvenient schedule but the price was right or if your plans change last minute.