If you have planned travel to Singapore in the coming week you might want to pay extra attention to the location of your hotel and commute plan as a location for the North Korea Summit has been narrowed down.

The government has declared a security zone (Special Event Area) under the Public Order Act which includes the popular Orchard / Tanglin area where the St. Regis, Hilton and Shangri La Hotel are located.

While there has been plenty of reporting around the summit in which U.S. President Trump and North Korean leader Kim Jong Un are meeting but this is actually the first time a possible location has been discussed.

U.S. Presidents have previously resided in the same area including at the St. Regis and Grand Hyatt Hotel but even though it’s unclear where and if Mr. Trump or Mr. Kim will actually overnight in the area, the meeting apparently takes place there and that means stringent security measures will be in place.

The inner security zone is especially sensitive, individuals are subject to searches and have to carry ID so don’t leave your passport at the hotel during that time. 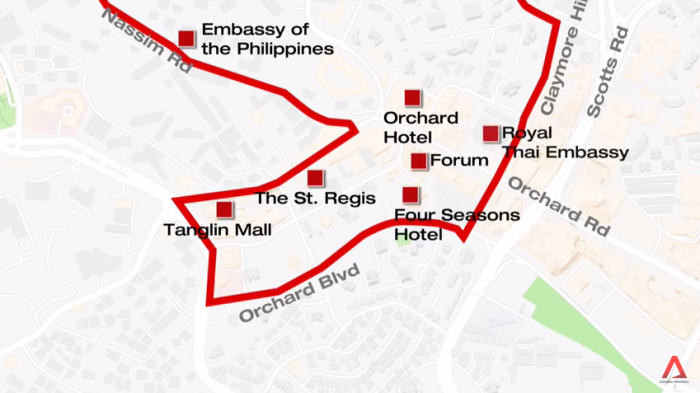 The summit is currently scheduled for June 12th, 2018 and there should be plenty of action in terms of fencing and preparation before and after that date.

There is also a report from Channel News Asia about the situation and zoning involved:

Should you have reservations at one of the hotels in the area I’d highly recommend to contact the property and request more information about their requirements and security measures in the area. I’m certain the hotels would also be willing to allow a cancellation on firm reservations in this case.

The Grand Hyatt Singapore is also very close to this perimeter so I’d probably avoid that as well if possible in any way.

It’s generally not a good idea to stay at any hotel where government representatives stay, especially V-VIP’s such as the American President come with plenty of security. I just remember with horror the Intercontinental Berlin a couple years ago. You couldn’t go anywhere near the hotel without passing a perimeter where the German police already conducted searches and an ID check. The IC didn’t inform me about that and I called them immediately and had the reservation cancelled.