A delayed Singapore Airlines flight from Singapore to Calcutta was the source trouble the other day after a faulty air condition of the aircraft caused a delay of 4 hours during which the passengers were forced to remain on board. 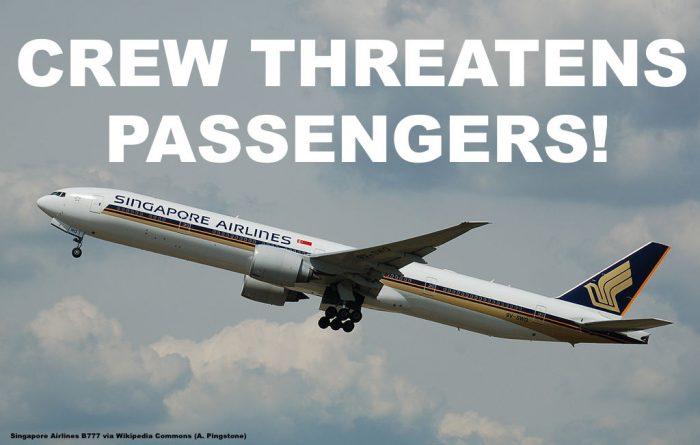 The crew didn’t update or inform passengers about the source of the issue and after some passengers complained the crew members threatened them with arrest by the police.

Ground delays are frustrating but technical defects on aircraft are often complicated and take some time to fix. Though this is all very well the best to keep passengers calm and in an understanding mood is to update them with honest answers during such delays because if the crew doesn’t provide an explanation for long delays then a situation such as this one might easily arise.

The Independent (see here) reported about the unprofessional response a SIA crew on the Calcutta bound flight had for the passengers.

… Apparently, the flight could not depart due to an issue with the air-conditioner and an SIA air stewardess allegedly admitted that “the aircraft hasn’t been in use for a long time and so the airconditioning was not working.”

Passengers, who were already disgruntled as they were delayed by a bus carrying them to the plane, allegedly felt like prisoners in the plane as they were told to stay put and keep their seatbelts on for hours before the plane took off.

Chandni says that when passengers, who were in the dark about what was going on, tried to seek answers they were rudely shut down: “When we confronted the cabin crew, they had no answers, rudely shut us up, threatened to call the cops to arrest us, and said “we are in the same situation as you are, don’t ask us, we don’t know anything”.”

Chandni added: “The airline didn’t let anybody go. We were being treated like prisoners, being asked to sit in our seats and wear our seatbelts. They told us if we were going to offload ourselves then we wouldn’t be allowed back in and they would put us on another plane which was two days later and they wouldn’t compensate us for any of it.”

The traumatic experience, along with the heat and humidity in the aircraft without ventilation, reportedly caused many passengers – including the elderly and the pregnant – to feel sick and throw up. Despite this, airline staff allegedly refused to even offer the sick passengers water. …

Tensions run high quickly, especially if a flight that would otherwise take 3:30h in total is already four hours delayed with passengers already on board. The plane apparently had a tarmac position (first time I’ve heard about that in Singapore-Changi) and passengers weren’t being served refreshments either.

This video reflects part of the frustration going on during the delay on this Singapore Airlines flight.

As far as the information goes that the next flight wouldn’t be until two days later and the airline wouldn’t provide any compensation I’d say that’s a typical tactic (LIE) from airline employees who want to shut up a complaining passenger. I wouldn’t react to that and like have gotten off the plane or demanded to be transported back to the terminal much earlier than that (done so multiple times in the past).

In the U.S. the Department of Transportation has so called Tarmac Rules which give guidelines to airlines how to accommodate passengers in cases of a ground delay.

– For flights departing from a U.S. airport, airlines are required to begin to move the airplane to a location where passengers can safely get off before 3 hours for domestic flights and 4 hours for international flights.

– Passengers should be aware that if they choose to get off the airplane during a tarmac delay, airlines are not required to let them back on the airplane. The flight may take off without them and passengers may be responsible for finding another flight.

– During a tarmac delay, airlines must provide you with a snack, such as a granola bar, and drinking water no later than two hours after the aircraft leaves the gate (in the case of a departure) or touches down (in the case of an arrival). …

Since this was an international flight the four hours wouldn’t have been exceeded yet but the lack of a snack and refreshment is appalling in this case. Anyway this is Singapore and not the U.S. so above rules don’t apply either way.

As far as threats to call the police and possible arrests go this is a common issue with airline employees on a power trip. I had one such situation at San Francisco Airport a few years ago and actually ended up calling the airport police myself, then filed a police report against the employee based on her behavior of trying to use the threat of law enforcement to intimidate a customer without grounds. Let’s just say her day didn’t end very well (she was led away from the gate by her manager and the cops to a back office).

The behavior of Singapore Airlines staff was unprofessional here and the airline should apologize plus issue compensation to the passengers on this flight. Usually SIA crew is held to a higher standard but after a few hours of delay I guess they were frustrated as well which is no reason to actually engage in this conduct though.

These days there is always a cellphone camera rolling somewhere that eventually provides for some ugly pictures and in some cases that’s a big disadvantage for at least one party involved (United Airlines case with the assaulted doctor for example).