Etihad Airways has incurred a giant billion dollar deficit for the second year in a row, reporting a $1.52 Billion loss for the financial year 2017. 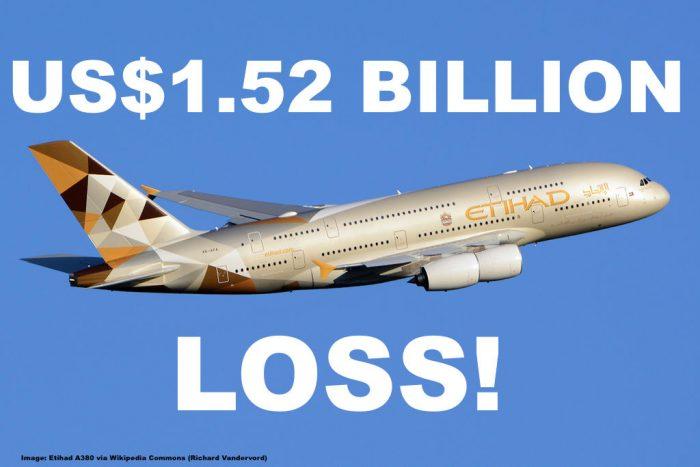 In 2016 the airline already reported being close to two billion US$ in the hole and now another giant loss for the last year – in the ‘era of the ME3 carriers’ coming to an end?

Etihad is in a unique position as the company has not only incurred heavy operational losses but also entangled themselves in expensive joint ventures and investments, many of which went belly up and cost the company a lot of money that isn’t even reflected in the published numbers.

The current Etihad Corporate Communications with the financial results can be accessed here.

Passenger and cargo yields improved as a result of capacity discipline, changes to the network with an increased focus on point-to-point traffic, leveraging of technology, and improving market conditions.

A strong focus on efficiency delivered a 7.3% reduction in unit costs, despite the adverse impact of US$ 337 million from higher fuel prices.

The airline reduced administration and general expenses by 14%, or US$ 162 million, over 2016.

Etihad Airways carried 18.6 million passengers at a 78.5% load factor. Available Seat Kilometres (ASKs) increased by 1% in 2017 reflecting a significant moderation of capacity growth, and contributing to an improvement in the quality of the airline’s revenues.

Etihad Cargo reduced capacity by 6%; however, revenues declined only marginally, down 0.8%, driven by stronger load factors and yields. Etihad Cargo carried 552,000 tonnes of cargo in 2017.

To compare, Etihad published a chart comparing the 2017 / 2016 figures to each other:

When you compare the numbers then you realize that yes – the losses are $430 million less than for 2016 but the all other numbers are pretty much in line with very little to no difference from 2016 to 2017 with the exception of cargo which makes sense considering the Qatar embargo.

Peter Baumgartner, Chief Executive Officer of Etihad Airways, said: “Our transformation process has delivered tangible results to date, with a significant improvement in performance for 2017.

“Passenger yields for the last quarter were up a very healthy 9% versus the same period a year before. On-time performance was at record levels and operationally we continue to drive down costs without compromising on safety or quality across all areas of the business.

That statement by the CEO sounds a bit optimistic considering the overall result. If you have a $1.52 billion loss I’m not so sure if you can talk about a ‘significant improvement in performance’ just because the previous year the losses were even greater.

It remains to be seen if Etihad will be able to get back in the black during the next few years once things settle down, their entanglements in the horrible Alitalia and Air Berlin situation have been put to rest.

The ME3 carriers were literally flying high in terms of investments into their fleet and ground infrastructure but in the last few years it became difficult for them to materialize their expected growth rates and especially profitability. It remains to be seen if this actually marks the beginning of a slow demise for the popular middle east carriers or if they can restart the engine somehow.

Today’s Airfare of the Day goes to Etihad and their business class promotional round trip fares between Jakarta (CGK), Indonesia...