This weeks Compensation Clinic is about a situation I encountered with United Airlines in San Francisco where I first got into an argument with a gate agent about standby and then got handed a broken glass at the United Club.

Contrary to all the bad press the carrier received in the recent past I actually don’t mind flying United every now and then domestically, especially considering that in order to keep your United Premier Gold status a minimum of four United segments are required each year.

During last month’s trip to North America I decided to clock all these flights in and had a quite positive experience except on the flight from San Francisco to Las Vegas.

My flight into SFO arrived early and there was an earlier flight to Las Vegas leaving (which was actually two hours late). I went to the gate and inquired with the gate agent about a standby on this flight. He agreed to clear me for Economy Class but not for First Class despite the fact that there were still four seats in First available and no other passengers on the Upgrade Standby list.

Considering my own flight left only 70 minutes later I decided to just leave and not waste anymore time. SFO has a United Club and an Amex Centurion Lounge so I ventured there to have a look (I haven’t been to SFO for a while).

At the United Club I ordered a simple soda and later noticed the glass was actually broken off in a pretty dangerous way: 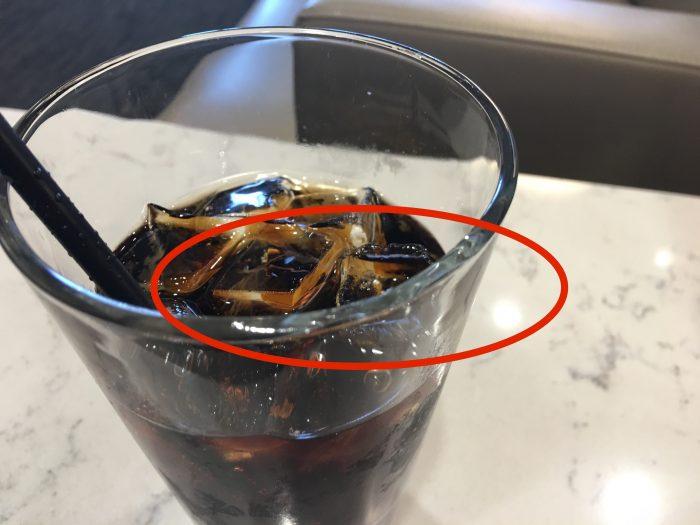 I asked for a customer service director and showed him the glass as well as complained about the situation with the gate agent.

The manager confirmed that the gate agent didn’t follow proper procedure in my case. A standby customer on an ticket that was originally Economy Class and then upgraded to First Class has to be cleared for Economy Class, then added to the upgrade list and cleared from that one in priority sequence.

Obviously since there was nobody on the upgrade list on my flight it would be have zero problem to do this in two subsequent strokes but the gate agent was too lazy to do it. As there was nothing the manager could do he asked me to write in to customer relations which I did.

Here is their answer:

… I was sorry to read the level of service offered by our airport representative at the gate and in the United Club when you asked to be moved to flight 943.  Our representatives are expected to provide exceptional customer service and remain professional at all times.

I share your concern for the glass that your drink was served in at the United Club.

Thank you for taking the time to bring your experience to our attention.  I’ll make sure to send your feedback so it can be reviewed. I hope your next flight earns a more positive review.

To make amends, I’ll add 7,500 bonus miles to your account.  A confirmation of the deposit will be sent to you within a few days.

7,500 miles is definitely a generous amount for this matter, especially since I’m just Gold Premier with United.

One of my largest issues with airline employees is that they make up their own rules on the fly and are rarely held accountable for their actions, even if customers complain about them. At least I saw the manager I talked to earlier to look over the same gate agents shoulder as he was working on my actual departure as well, likely to avoid any further issues.

After the United Club incident with the broken glass I moved on to the American Express Centurion Lounge which was pretty fantastic, including a decent hot dinner and proper bar service.

United customer care has generally been good but unfortunately it’s always the initial situation that spoils the experience. That standby situation was completely unnecessary and the broken glass could have been prevented if the bartender would actually have his eyes open. I much prefer self service these days as it’s faster and at least you can take self responsibility for such things and just grab another glass.