From our series Award Success we have a new redemption showcasing the use of GOL Smiles for a ticket on Qatar Airways Business Class between Thailand and Germany.

Gol Smiles hasn’t been much in the focus anymore since they stopped their crazy promotions and now have a requirement of customers using a Brazilian tax ID number to participate in the program.

I have signed up for GOL Smiles since the early days when they first came around and have such a number on file so I’m quite happy about my option to redeem Smiles tickets several times a year and have reported about these awards on a few occasions (mostly redemptions on Korean Air).

GOL Smiles have a wide variety of redemption partners these days:

Unfortunately if you search a few routes you’ll quickly discover that the award pricing is quite high except for awards on Gol, Qatar Airways and Korean Air which can be had for cheap.

I’m enrolled in the Clube Smiles program, basically a paid subscription that adds 10,000 Smiles to the account on a monthly basis for 299 BRL ( ~ US$80). You can then use the base amount of miles plus a cash portion to book your award ticket.

Here is my routing I chose for Bangkok – DOHA – Frankfurt ON Qatar Airways: 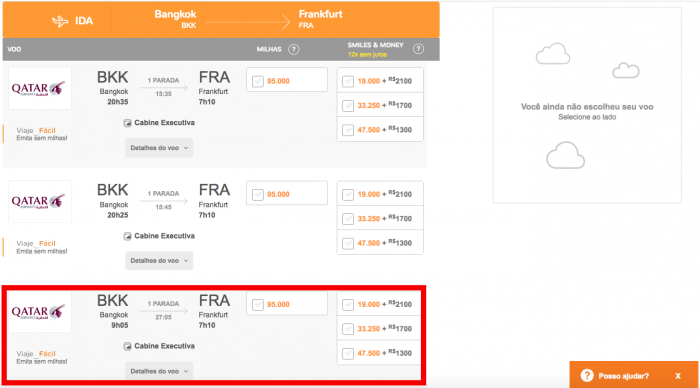 Both of these flights are operated by the Boeing 777-300 ER and are equipped with the new Q Suites which was a pleasant surprise when I checked for the seat map (I try to avoid their regular B777 with the old Business Class). Another big advantage is that GOL allows some very long stopover variations as I want to visit a friend in the city.

After issuing the award you can then revert to the Qatar Airways website and select seats as well as amend passenger information such as frequent flier information.

Here is how the Q Suites seat map looks like:

I decided for a seat in row 8 which is the smaller cabin and supposedly more quiet. We’ll see if that’s actually a good choice or not.

Another great redemption with GOL Smiles for me. I paid roughly US$480 for the 47,500 base miles plus another US$340 for the cash supplement and tax during the redemption process. In total about US$720 for the one way in Business Class which is slightly more expensive than the Korean Air Ticket I usually book ex Korea but at least I get to see a new product and can combine it with a day trip in Doha.