WSJ: “The Airline Fee That Exists for No Apparent Reason”

The Wall Street Journal run a piece yesterday “The Airline Fee That Exists for No Apparent Reason” that deals with a topic that we have discussed about here on LoyaltyLobby numerous times over the years.

The WSJ tries to deal with the logic, if any, behind the carrier imposed surcharges on airline tickets that were first called fuel surcharges. When the price of the fuel dropped and regulators got interested in the name of the surcharge changed promptly.

On international tickets, many carriers break their price into “base fare” and “carrier-imposed fees,” lumping the fee with government taxes and fees. The carrier fees began as fuel surcharges a decade ago. But now they appear truly arbitrary.

They aren’t tied to distance traveled—fees are often the same for flights from Europe to New York and Los Angeles. They vary wildly by direction of travel. Business-class tickets on British Airways between New York and London have a $1,006 carrier-imposed charge if the round-trip begins in New York, but only $381 if the round trip originates in London.

Breaking out a significant chunk of the fare and calling it a fee lumped with taxes makes the tax bite look far bigger on tickets. It’s not always obvious that an “international surcharge” goes to the airline.

These surcharges are nothing but scams by the airlines that they could easily roll to the base fares but then they could not collect them from the redemption tickets. 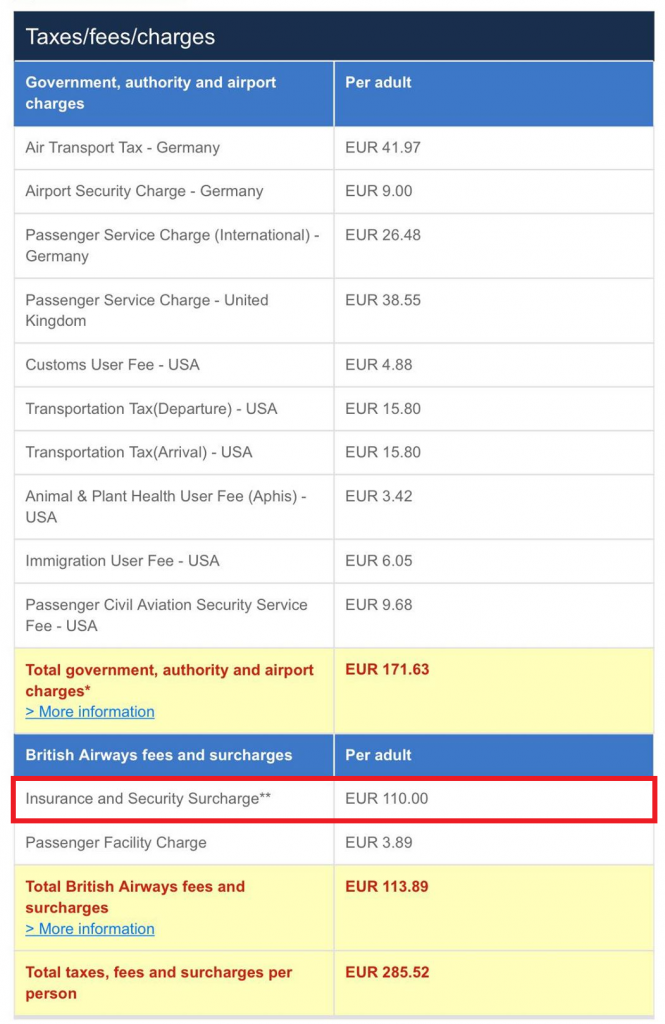 British Airways has decided to call this “Insurance and Security Surcharge” and was 110 euros on one recent ticket. This amount surely has no base in any actual insurance or security what BA might pay.

There are countries such as Brazil and Philippines that have banned these fake surcharges, and other countries such as Hong Kong and Japan regulate them (very reasonable). Then there is this case with British Airways and Virgin Atlantic where these charges are out of control.

Sometimes it is actually cheaper to buy a paid ticket on the same flights than use miles in case of Lufthansa for example. They have suppressed these fees on some intra-Europe paid economy tickets that are nevertheless charges on awards.

The WSJ’s headline is actually incorrect. These fees do exist for a reason and that is for the airlines’ ability to collect them on awards.