Vancouver International Airport YVR has announced a long term plan to prepare the popular west coast gateway for the coming decades as $9.1 Billion will be spent over the next 20 years. 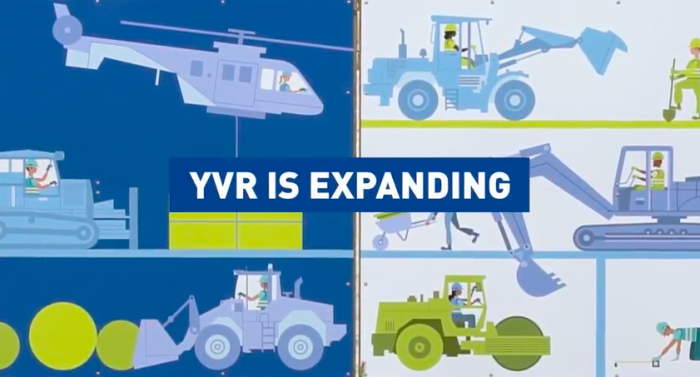 YVR Airport has already begun massive structural repairs and expansions in tarmac as well as terminal while tenants of the buildings have also improved facilities such as lounges.

As the big players in the airport game struggle to keep up with the large number of passengers and expected increases expected in the coming years, YVR’s competition such as LAX also began a major overhaul we recently reported on.

Now YVR decided to follow suit in order to not be left out in the coming decades and the board decided to invest a total of $9.1 Billion into the airports infrastructure stretched over the coming 20 years.

You can access the press release of the airport authority here.

Today, Vancouver International Airport (YVR) broke ground on a number of capital construction projects to enhance the airport experience and improve YVR’s competitive position as a world-class connecting hub. The projects are part of YVR’s multi-year expansion plans that will see the airport complete 75 major projects, totaling $9.1 billion over the next 20 years.

YVR is one of the fastest-growing airports in North America. It welcomed a record 24.2 million passengers in 2017 and is forecasting 32 million passengers by 2022. About 327,000 tonnes of cargo are expected to move through the airport by 2020. These newest construction projects will improve the speed with which people and goods move through YVR, and provide passengers with a wide range of compelling offerings and amenities. …

YVR’s multi-year expansion plans are made possible by YVR’s unique, not-for-profit operating model. YVR receives no government funding and all profits generated at YVR are reinvested back into the airport for the benefit of its customers, partners and communities. …

As much as I like YVR as my quasi home airport I had to swallow hard upon reading that last paragraph. After all Vancouver Airport users are still being charged a $20 Airport Improvement Fee (AIF) on their tickets 9 ($5 for flights within BC). That’s pure cash on top of all other fees an airport usually levies.

Vancouver isn’t the only airport that does this but on a global scale it’s still somewhat of a rarity. If the airport authority eyes 32 Mio passengers by 2020 and let’s say 30 Mio are subjected to the $20 fee thats $600 Million per year. Times 20 that’s $12 Billion so even higher by a quarter than the estimated investment in this project. Surely a luxury problem to have of how to spend that much money.

YVR also has a dedicated construction website (access here) to keep the public up to date on their projects.

Here is one key announcement:

Our international, domestic and transborder (U.S.) terminals are nearing capacity. To ensure we meet future growth, we have a number of expansions coming up, with construction starting on a new international pier in 2018.

Indeed there are some major changes already when you have a look around the airport and compare it to 2-3 years ago. You also notice the giant construction effort on the tarmac – especially through delays.

Here is the proposed extension for YVR’s terminals:

One can only hope that the architects finally though of a way to expedite foot traffic in the new terminal structures, especially after de-planing as the way from the aircraft to immigration can already be quite long depending on the parking position.

Airports are prime real estate and a major driving force of a regions economy. As such ongoing projects and investments are an absolute must to ensure the facilities aren’t the victim of decay and being slowly overtaken by rivals domestically and internationally.

Even though I’m against gouging passengers every left and right by fees, the AIF helped keeping YVR a highly regarded airport for many years, one that consistently receives awards for it’s design and functionality. In Vancouver’s case everything seems to receive some sort of an immediate funding by the users of the facility.

Take the Canada Line for example which was finished up ready for our Olympics roughly a decade ago. Even today, Translink collects $5 Airport add-on fee for each ticket that leaves YVR and the two other Sea Island stations to ‘pay for cost of the Canada Line’. Even adding some of that money up as a quick rundown makes my head spin. A license to print money – lot’s of it!