OAG published analyses earlier this week (access here) based on their schedule and traffic date (must have applied some secret sauce too) to come up with top 10 revenue generating routes for single airlines. 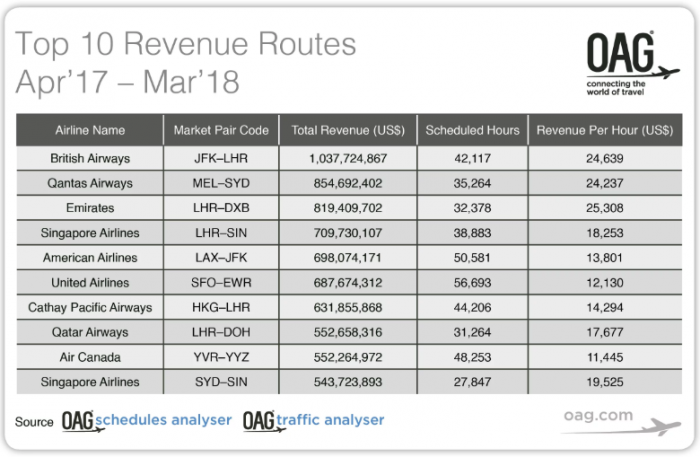 You can access the OAG’s piece here of which below is an excerpt:

Globally one route breaks the billion-dollar threshold, the British Airways LHR – JFK service and that’s about 6% of BA’s total revenue in 2017. On an hourly basis, that equates to US$24,639 which amazingly is not quite the highest hourly earner. That accolade goes to the Emirates LHR – DXB service that ranks third in the Top 10.

All of the Top 10 routes are also high-cost operations, combining generally wide-bodied services with high frequency, in the case of MEL – SYD with Qantas operating around 65 flights a day on just that one route. Typically, these routes also include a high proportion of business traffic, later booking and higher yielding in nature. Whilst the cost of operating may be high, at least the revenues are likely to be even higher!

Just found this chart interesting and it also illustrates how important one single route can be for an airline (for BA in this instance).

It is very difficult for the new entrants to break into London’s Heathrow because there are no free slots. They can be purchased or leased at very high price. Let’s hope that the third runway will come to the rescue.