Air China had an incident yesterday where a flight from Hong Kong to Dalian suddenly lost cabin pressure which prompted the pilot to descent down to 10,000 ft and deploy the oxygen masks. 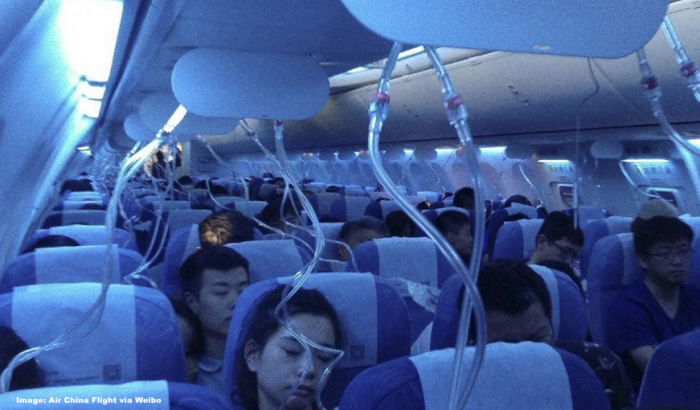 The aircraft was a four year old Boeing 737 with 159 passengers plus crew, yet unbelievably the pilot continued to fly 3+ hours to Dalian with deployed oxygen masks instead of landing at the nearest airport.

The South China Morning Post (access here) reported that the incident took place near Xiamen yet after pressure had been restored the pilot continued to fly to Dalian.

An Air China plane that departed Hong Kong for Dalian on Tuesday night dropped 25,000 feet in 10 minutes, triggering the release of oxygen masks from the cabin ceiling, though the aircraft later landed safely in the northern city, flight data indicated. …

One writing on Chinese microblogging platform Weibo said: “The announcement from the cockpit said the ability to increase oxygen in the cabin malfunctioned so the plane lost pressure.”

According to tracking website FlightRadar24, the 159-seater Boeing 737 suddenly began descending at 7.40pm between Shantou and Xiamen, half an hour after it took off from Hong Kong International Airport.

The aircraft then continued to the port city of Dalian in China’s Liaoning province, with the flight lasting three and a half hours. …

A professional pilot with more than 25 years of experience said any depressurisation of the cabin would prompt the pilots to descend to 10,000 feet, as they did in this case.

“That is what is considered a safe, breathable atmosphere for the passengers, and then the captain has to make a decision,” he said.

“I would say in just about every case, you would want to land as soon as possible. But it depends on what happens in the plane and what the pilots’ checklist says. “In most cases you would have declared an emergency on the way down and then you would have landed at the most suitable airport.”

The gradual descent of 25,000 ft within 10 minutes isn’t like a sudden drop in altitude but deploying oxygen masks doesn’t do much to assure people for the remainder of the flight.

Whenever I flew on Air China some things appeared to be odd and the decision to continue flying 3 more hours with deployed oxygen masks and scared passengers doesn’t surprise me at all.

Many of Air China’s operations simply don’t make sense and they aren’t the only Chinese carrier that have very suspicious safety policies. On a recent Beijing-Shanghai flight I was told to plug out the disposable headphone during landing – the same headphones the cabin crew distributed earlier. Then the recently abolished nonsense regulation of not being allowed to use laptops and cellphones during the flight. Talk about the right safety priorities…