Southwest Airlines is the latest airline that announced a stop to their signature peanut snacks which will no longer be served as of August 1st 2018. 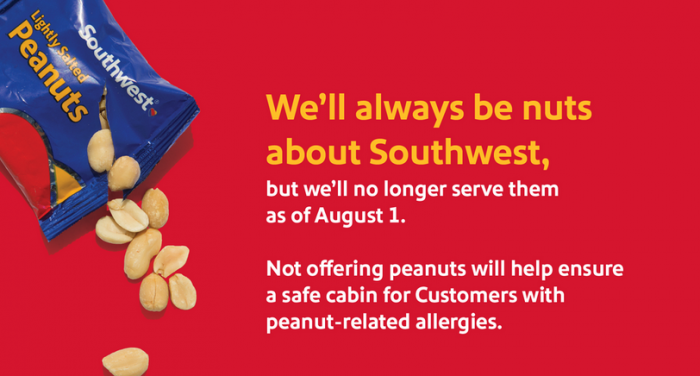 The airline decided to eliminate the service over allergy concerns of some passengers and joins a long list of carriers that have done the same in recent months.

Just in April this year Singapore Airlines also decided that peanuts would no longer be served after reviewing the matter for almost a year (see our article here).

Now Southwest took their own initiative in this regards and put out a press release yesterday.

As of August 1, Southwest Airlines will no longer serve peanuts onboard and will instead serve pretzels on all flights. This decision wasn’t made lightly, but in the interest of providing the best Hospitality and a welcoming and safe onboard environment for Customers with peanut or peanut-dust allergies, we felt it was the right thing to do.

Although peanuts are very much a part of our Company’s heritage and have always been part of Southwest Airlines’ identity, it became clear after careful evaluation that the risks of serving peanuts outweigh the rewards. We hope that Customers who will miss our peanuts will enjoy our free pretzels and wonderful selection of snacks on longer flights.

Of course we’ll always be NUTS about Southwest and our Company will continue to honor the significant role that our peanuts played in our history, but at the end of the day, we’re most proud of our People and their Hospitality that sets us apart.

So it appears that Southwest will replace the peanuts with pretzels while other airlines have provided no substitute at all after scrapping the peanuts from their flights.

It’s not easy to travel with certain dietary requirement and especially with health deficiencies in regards to something as simple as peanuts. However people themselves bring all sorts of items to eat on the plane and at the same time peanuts or other types of nuts are popular as a snack.

Do I really care if an airline stopped serving them? Probably not as long as they provide something else. In any case it’s hard to please everybody. I just wish the airlines would do the same for people who are allergic to certain types of pets (or their fur) and stop allowing any type of animals into the cabin.