Our Whine Wednesday topic is this is Malaysia Airlines that currently (once again) cancels short haul flights, especially on the KUL-BKK route, and consolidates all passengers to one A380 hours later.

On top of it all, Malaysia Airlines then caters only Standard Economy Class meals for the entire plane even for Business Class passengers and refuses to compensate the customers.

It’s well known by now that Malaysia Airlines has a horrible management and their operations are borderline fraud when it comes to dealing with customers based on their ‘operating at will’ policy.

So what happens this week? Malaysia Airlines presently cancels several flights daily on their Bangkok rotation and instead uses one Airbus A380 Aircraft.

These cancellations are not due to operational reasons such as defective aircraft or staff shortage but simply because MH is attempting to save money and in that process doesn’t fulfill their contractual obligations to passengers.

Malaysia airlines is a scheduled carrier that sells tickets per a pre-determined schedule unlike a charter airline. The behavior of cancelling flights on the same day for roughly a week is therefore unacceptable. It’s clear that the airlines management knows days before they will cancel certain flights yet they will only inform passengers about this on the same morning of their departures, delaying them for hours. This affects especially the afternoon rotations to Bangkok.

On Sunday July 8th MH cancelled 3 flights and moved all the passengers into their Airbus A380 departure MH 780. I was delayed by 3 hours and informed by MH via Email at 10am the same morning.

The same happened on the previous saturday and checking the flight history of MH operations between KUL and BKK revealed that this has been the case during the entire week already.

On top of it all Malaysia Airlines then catered only standard Economy Class meals for the entire aircraft and Business Class passengers didn’t receive any refund or meal voucher as compensation for their paid services.

For the handling at Bangkok Airport, Malaysia Airlines then refused to pay the airport authority for the required A380 gate position and instead handles the entire flight (the largest aircraft in the world) by a bus gate tarmac position.

This way of operation is simply fraudulent and I have lodged a complained with Malaysia’s national regulator MAVCOM (you can do the same here) that should take measures in this case.

The airline should really be instructed to cease this conduct immediately and compensate affected passengers adequately for their delays and inferior service received.

As the only positive side to this whole matter I was able to get a seat in the First Class cabin of the A380 (1G) which was at least more comfortable than their Business Class upstairs.

This is the First Cabin product (second row) on the lower deck of the MH A380: 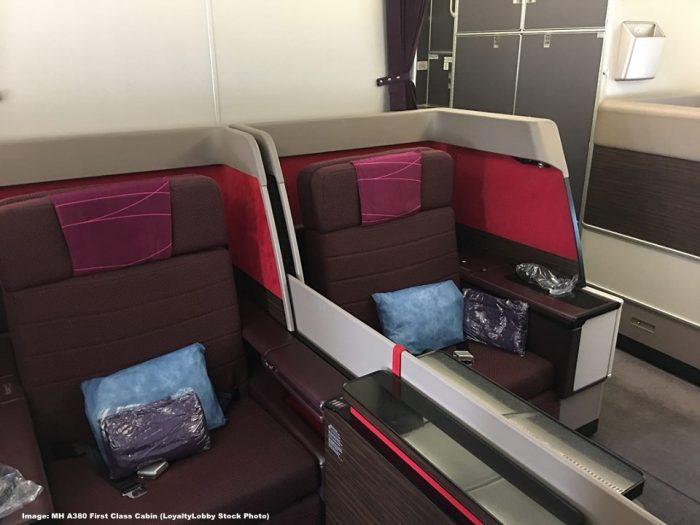 Keep in mind I was originally booked on the 15:10pm departure which was schedule to be operated by the A330 that has single seats available and cost me a good $90 more since Z class for the feeder flight from DPS was sold out for that segment. Needless to say I wasn’t impressed at all by the change of flights and the subsequent lack of Business Class meals.

The inflight crew was very friendly and apologetic though, can’t fault the service for anything that’s related to management decisions.

Malaysia Airlines as a flag carrier gives the country a bad name by these one sided, at will operations that should not be tolerated by the national regulator. Yes, their tickets are cheap but that is no excuse for an airline to act like a regular charter carrier and abandon their scheduled services whenever they please to do so.

Being unreliable is the worst image an airline can have and while the value might be there having to deal with such things constantly is really a huge pain. I was checking my emails and this year alone I had 14 Malaysia Airlines “Retiming of your flight” emails which they don’t even properly call delays or cancellations.