After abandoning the route a couple years ago Singapore Airlines has now brought back both ultra long haul flights to the United States: Newark & Los Angeles, both which will start in the late fall. 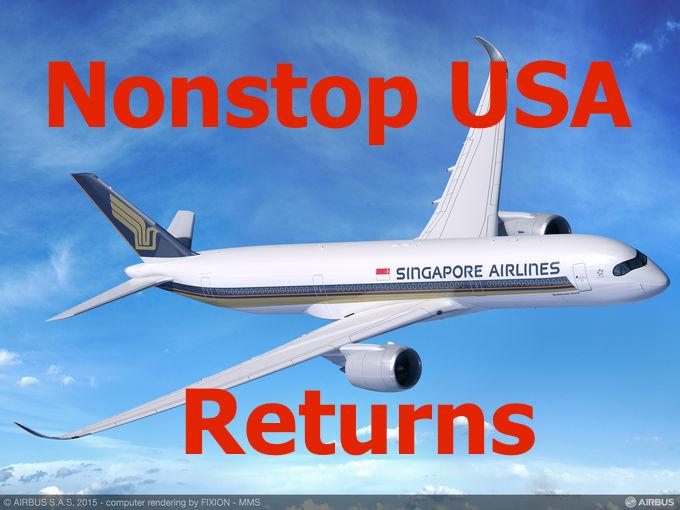 As we reported previously the New York-Newark flights will begin on October 11th and now the Los Angeles date has been set for November 9th 2018.

It’s been five years after the flights have been stopped operating due to bad yields amid high fuel prices. I can still remember that these flights were testing my endurance. I flew the Los Angeles route a few times and the New York Newark route once in Business Class short before it was discontinued.

You can access Singapore Airlines Press Release here with all information concerning the flights.

The actual launch date for the Singapore – Los Angeles – Singapore route has been somewhat under wrap and SIA didn’t even announce it but just uploaded the first available flights which will be on November 9th 2018 into the GDS yesterday.

These are the Los Angeles connections:

It’s possible to request an award ticket (on waitlist) on the nonstop for the inaugural flight LAX-SIN using your KrisFlyer Miles. It would price for 88,000 miles one way or 176,000 miles round trip all the way to/from Singapore (and onward to another destination in the same region if you so wish). The taxes and fees are minimal.

The aircraft will be configured in a two-class layout, with 67 Business Class seats and 94 Premium Economy Class seats.

The configuration is extremely interesting considering it’s two class only and includes only Business Class and Premium Economy. Singapore Airlines has decided to forego First Class and regular Economy Class on this route for which there are several possible reasons.

For one as I mentioned above these flights are extremely exhausting even in Business Class so doing them in regular Economy might be something not many passengers would like to endure and likely decide against booking this connection. First Class would certainly have allure to it for such a long route but the question is if the airline can actually turn enough revenue with First Class.

Those customers who like First Class (or Economy Class – gasp) can still select to fly SIA on Los Angeles-Tokyo or Los Angeles-Seoul and connect there, getting the chance to leave the aircraft for a few hours or even schedule a stopover.

The last few flights I took on Los Angeles to Singapore were all barely half full that was Business Class only. Maybe New York has a better yield but since Singapore Airlines is also planning on bringing SIN-LAX-SIN back it appears that SIA is banking on the demand for such direct flights being much greater than in the past including those kind of passengers who are willing to fly in Premium Economy. While I’m generally a fan of Premium Economy products I can’t imagine 18 hours in a PE seat.

Good fortune for Singapore Airlines and their Los Angeles route: Competitor United Airlines is going to ditch their LAX-SIN nonstops within the same week, concentrating their fortunes on this route on the San Francisco departures. Let’s face it: Who would buy United over Singapore Airlines on the same route unless you want to use your upgrade instruments and that doesn’t pay the bill.