Hainan Airlines has previously ordered a number of Airbus A330 but not they are in hot water as the manufacturer refuses delivery to the Chinese carrier since they apparently can’t pay for aircraft. 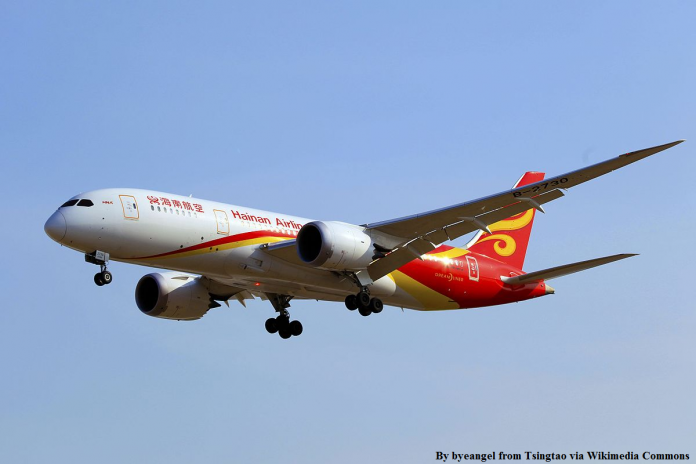 Hainan Airlines parent company HNA is in turmoil due to a shortage of capital and the recent sudden departure of their chairman who fell to his death while vacationing in France.

The outstanding A330 orders Hainan has with Airbus apparently amounts to US$1.4 Billion so 6 aircraft based on the latest price list and painted frames spotted by reporters on the Airbus lot.

Europe’s Airbus is in talks with Chinese conglomerate HNA Group to ease a standoff over late payments that halted the delivery of passenger jets worth over $1 billion, people familiar with the matter said.

Reuters exclusively reported on Wednesday that Airbus faced a logjam of undelivered wide-body jets because it had not been paid by the debt-laden aviation-to-finance group.

The companies are trying to come to an agreement that would allow at least some of the parked aircraft to be delivered, the sources said, asking not to be identified.

An Airbus spokesman reiterated any talks with customers were confidential and that it was up to customers to announce delivery plans. HNA was not immediately available for comment.

HNA Group includes the airlines Hainan Airlines, Beijing Capital Airlines und Tianjin Airlines of which there are several aircraft sitting around idle at the Toulouse plant. HNA got into hot water with real estate deals that saw the financial stability of the company dwindle and also brought them into the focus of the Chinese government which is especially tricky.

Just a few months ago Beijing took over Anbang Insurance, the company who just last year planned to buy Starwood Hotels for cash, after they ran out of money. The CEO was later convicted of fraud and crimes against the state after being accused of running the company like a ponzi scheme, collecting money from investors and distributing it among unsound investment portfolios putting stress on the Chinese financial system.

Rumors have it that HNA is also under investigation with the special twist that HNA Chairman Wang Jian fell to his death under mysterious circumstances while vacationing in France (see out last article about that tragedy here).

HNA has an estimated US$93 Billion debt and in recent years went on an expansion/shopping trip abroad buying large into Deutsche Bank and Hilton Hotels. In just three years HNA has spent (invested) US$40 Billion in such enterprises until the pressures rose in 2017 and news circled that HNA pays massive interest and has a horrendous capital/debt ratio. The company then approached the government, sought advise and pledged loyalty to the state as well as the economic vision of the party (you can’t make this stuff up).

A few weeks ago in late June 2018 the company came to an agreement with the government about financial backing and restructuring of the company. Several state owned banks are supporting HNA in this effort.

Airbus, HNA and their financial supporters are currently trying to resolve the issues surrounding the delivery of the aircraft in order to get them out the door.

According to Aerotelegraph the daily cost for having an A330 sitting in the lot amount to roughly US$10,000 for maintenance, parking, loss of value etc. Sums that accumulate very quickly if there isn’t an amicable solution in the near future.