The two British divers who helped in the rescue operation to get 12 missing children out of a cave have been presented with appreciation certificates and were promised free flights on Thai Airways for life. 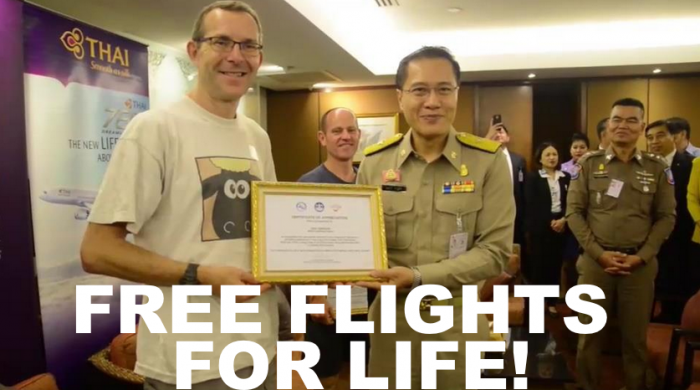 The rescue operation took almost three weeks and involved numerous officials through a multinational effort as well as volunteers such as the two Brits who eventually found the missing boys and their coach.

Tragically, during the course of the operation one diver who was a member of the Thai Navy lost his life while being on a dive inside the cave system.

The two British volunteers Mr. John Volanthen and Mr. Jason Mallinson were given certificates and medals during their stop in Bangkok before they flew home.

You can read about this story in the Daily Mail (access here).

The British divers who took part in the rescue of 12 Thai boys and their football coach, who were trapped in a flooded cave, left an emotional message for the children as the flew back to the UK

Jason Mallinson, from Huddersfield, said: ‘We’re very glad we could get you out alive,’ before adding to the rescued boys to ‘be careful in the future’.

Mr Mallinson, 50, and fellow diver John Volanthen, 47, played down their heroic efforts as they landed in the UK this morning, with he latter saying: ‘We are not heroes, quite the opposite.’ …

The pair had been greeted by cheering crowds as they arrived at a Bangkok airport ahead of their flight back to the UK last night.

A contingency of government ministers were also in attendance to gift them certificates and medals – promising them free travel to Thailand for life.

Video shows the exhausted pair trudging through the airport in their shorts, t-shirt and backpacks before meeting Thailand’s ministers for Tourism and Travel.

Upon awarding them medals and certificates from the Prime Minister, Transport Minister Arkhom Termpittayapaisith added: ‘Consider it free tickets to Thailand, any time’.

‘This is to show our appreciation, our Prime Minister asked for you to be given this,’ Tourism Minister Wirasak Kowsoorad told them. ‘Thank you so much for your effort. It was a great rescue and we very appreciate it.  ‘Now, both of you, you will always be welcome, any time, you have so many friends here.’

That was indeed quite a drama which thankfully ended well for the children and their coach but not so much for the soldier who lost his life in the rescue efforts. The media has been reporting on this around the globe.

I wasn’t able to find a detailed picture or scan of the certificates they received or details on the promise of the free flights on Thai Airways for Mr. Volanthen and Mr. Mallinson. Fingers crossed for them these are premium tickets but in any case it’s a well deserved reward for the two men who voluntarily undertook this dangerous operation.