After roughly 10 days I now received the good news that American Express Assurance will reimburse me for the two expensive items in the bag as part of their Purchase Protection feature.

Essentially what happened was that I brought a beach bag to the pool that included a pair of shoes, sunglasses, some reading material and snacks. I placed the bag on the sunbed at a quite area of the Grand Hyatt Bali lagoon and went to the pool.

After getting back half an hour later the bag was gone and unable to be recovered (initially I thought maybe the pool attendants removed it because they thought someone forgot it). I didn’t suspect anyone would actually steal shoes and sunglasses but probably whoever took the bag suspected there was money inside – sorry pal, no cash needed inside the resort.

I was a bit unhappy that the hotel didn’t even have a proper Lost&Found form or incident report so I ended up emailing the hotel manager a self written incident report, listing the few items missing in case they’d turn up again.

It’s kind of annoying to be honest because the shoes are hard to replace given I wear a size 11 and living in Asia doesn’t make things easier. Usually I have to purchase shoes in Europe or North America. As luck would have it I bought these items just 5 weeks before from Saks in Los Angeles while traveling, using my Amex card – and that proved to be key in getting a reimbursement for the lost items.

My travel insurance doesn’t cover such random theft events of unsupervised items, however many American Express cards issued in the U.S. have a Purchase Protection feature, covering certain items purchased with the card against loss/theft for three months.

Purchase Protection provides coverage for Your purchases for ninety (90) days from the date of purchase when you charge any portion of the cost of the purchased item to your account. You will be reimbursed only for the amount charged to your account. The coverage provided under this plan is secondary coverage to any other valid and collectible insurance or other sources of indemnity.

I decided to file a claim as soon as I got home where I had the original receipts of the purchase that need to be uploaded in the online claims center. 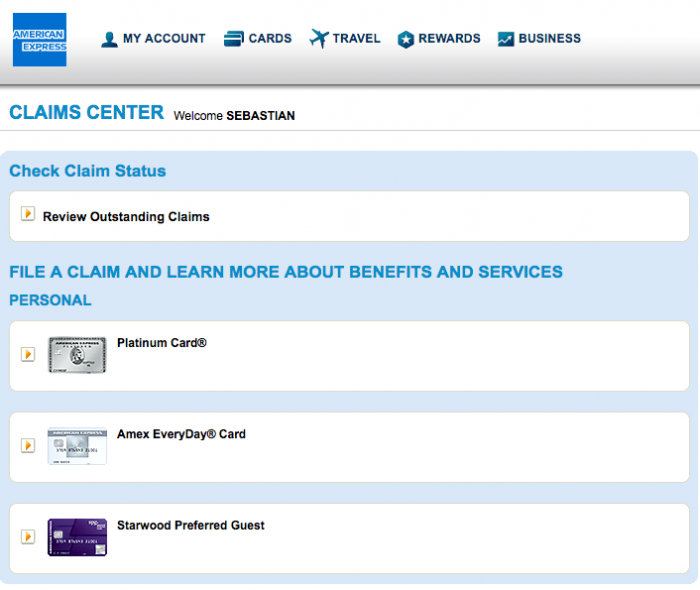 After submitting everything Amex sends out a confirmation of receipt saying that processing the claim can take up to 3 weeks. Today, just 10 days after filing, I got the letter notifying me that the claim has been reviewed and approved for the two items I submitted (sunglasses and shoes).

Overall I’m very satisfied with the outcome of this situation apart from the fact that I now have to go shopping for new shoes again which took me long enough to begin with.

This case highlights once again that it can pay off to pick a credit card that comes with a bit higher annual fee but which also covers you in unfortunate situations such as this one. My annual fee for the Amex Platinum is US$550 and this insurance claim alone reimbursed me US$470, pretty much paying for the entire membership this year.

I have written before that I consider a solid base of travel insurance to be essential for traveling abroad but not all incidents are fully covered by such policies. A sore spot is always theft of unsupervised items as it’s virtually impossible to supervise belongings at all times and let’s be honest who would suspect clothing items and beach utensils to be stolen?

Credit Card products can provide a viable alternative to full fledged travel insurance policies especially when it comes to newly purchased items and rental car coverage. It doesn’t even need to be a very expensive card such as the Amex Platinum as even the regular cards like the SPG Amex would have had the Purchase Protection feature included. I just feel that sometimes (or maybe most of the time) the decision is more favorable for cardholders of a premium card considering the high annual fee they pay.

As far as travel insurance overall is concerned American Express Platinum isn’t even the best product out there. Chase Visa Infinite cards (Ritz Carlton Visa, Chase Sapphire Reserve) have better coverage such as for trip interruption and primary rental car insurance but I’m currently waiting for a more lucrative sign up offer on these two cards. Keep in mind that this concerns card products on the U.S. market and policies differ from country to country (e.g. Amex Germany has a very comprehensive coverage for their Platinum members).