A British passenger who flew TUI Airlines (formerly Thomson) went into a rage after being denied a bacon roll food item by the cabin crew has been fined £230 in court this week. 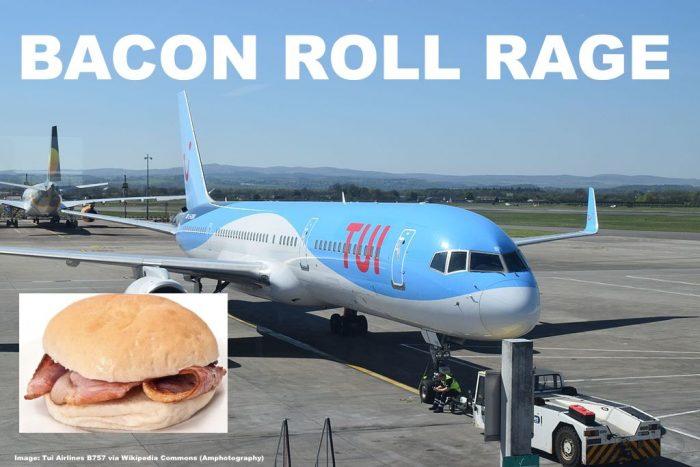 The man promised his granddaughter the snack was obviously not amused when the item wasn’t available on his flight and he totally lost it.

You wouldn’t expect someone going crazy over a bacon roll but this appear to be the case at least in this particular instance when the passenger found out his cherished item wasn’t available.

As the BBC (access here) reported the man went into rage when informed by the crew that the bacon roll wasn’t available on the Palma de Mallorca to Exeter flight last April.

Ronald James, 68, shouted at staff and “poked them with his finger”, leaving one in tears when his demand to see the captain was refused, a court heard.

Exeter Magistrates’ Court heard the row broke out because James had promised his grand-daughter the breakfast treat.

He admitted behaving in a threatening, abusive, insulting or disorderly manner. Magistrates also ordered him to pay £50 compensation to two air stewardesses.

The court heard Mr James was returning from Palma to Exeter in April with his daughter and grand-daughter on airline TUI.

At one point, his face was just 5cm (2in) from the face of a female crew member, which left her in tears, the court heard. Ms Baker said: “He was told he could not go up to the cockpit and was shouting face to face at her.

“He shouted and pointed at the cabin crew, poking staff with his finger, and refused to sit down when landing.” The argument lasted for “a couple of minutes” when the flight was 25 minutes from landing in Exeter, Devon.

Ms Baker said the row started because Mr James had “promised” his grand-daughter a bacon roll which wasn’t available on the flight. Representing himself he told the magistrates: “We had no breakfast, my granddaughter had been pushing for something to eat, and I said wait until we are on the plane.”

After buying beef burgers that were “dried out”, Mr James was given a refund, but said it “wasn’t enough”.

He said he wanted to speak to the captain to suggest that customers should be warned at check-in that there would be “no hot food”.

He was quite lucky that a 230 pound fine is all he received as a consequence for his actions inflight. Similar cases where cabin crew is assaulted usually end in a criminal conviction and a rather harsh treatment upon arrival. The flight was already about to land at it’s destination so he probably narrowly averted an unscheduled landing elsewhere to offload him.

Not sure what type of gourmet food the guy expected on a holiday flight from Mallorca to the UK considering the complaints about the ‘dried out beef burger’. The crew already offered a refund on that which was already quite gracious as I imagine other airlines would have told him to bugger off.

The pilots are there to fly the plane, not sure I want them to come out during the flight (especially upon approach) in order to solve someones dining disputes.