A female passenger caused a 5 hour delay on a United Express flight from Indianapolis after she got into an argument with the crew over gate checking her oversized bag which she brought on board. 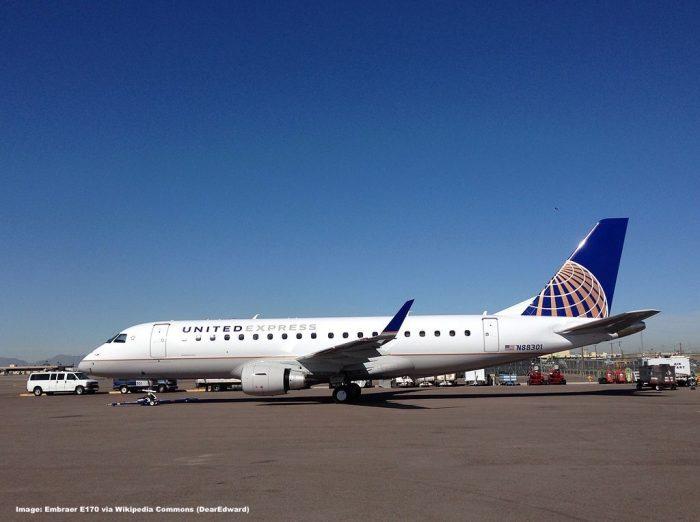 The Indianapolis-Newark flight was operated by an Embraer E170 that has limited overhead space and requires passengers to gate check their larger carry-on items.

Many of United’s routes in the U.S. including Transborder flights are actually United Express flights operated by partner airlines such as Skywest though the aircraft and crew feature the United corporate colors. These flight don’t have to be short as for example Los Angeles to Vancouver is a 3:05h flight and operated by United Express.

It’s always good to be prepared for such flights as far as your baggage is concerned as gate checking a bag requires you to remove valuable and sensitive items plus after landing one has to wait until the bags are being brought back up to the jetbridge.

One person on flight UA3708 IND-EWR this week didn’t like the small space on that regional jet and started an argument with the crew, resulting in a heavy delay for all as WTHR NBC (see here) reports.

It was a frustrating evening for passengers of flight 3708 when a woman on board refused to check a suitcase that was too large for carry-on regulations.

Crew members of the flight, which were headed from Indianapolis to Newark, asked the woman to check her bag, but she refused.

According to United Airways Spokeswoman Maddie King, the passenger became verbally abusive toward the crew. She was then asked to leave the aircraft, which she also refused to do.

All passengers were asked to deplane while the crew waited for this one woman to disembark.

The flight was delayed multiple times because of the incident. It was originally scheduled to leave at 7:05 p.m. but didn’t take off until 12:17 a.m. A different aircraft was used to get all other passengers to their destination.

Jason Kowalsky, a passenger on the flight, said the entire situation was “frustrating.” Kowalsky said he and other passengers sat in the terminal for more than 4 hours with little information and no food or drink options because food vendors were closed by that time. Kowalsky said, “They could have handled it much better. The fact that one person can hold us hostage is outrageous.”

A customer on United Express flight 3708 from Indianapolis to Newark was asked to check her oversized bag, and she refused to do so. She became verbally abusive to the crew and they asked her to leave the aircraft. The customer refused and all customers were asked to deplane. To minimize the inconvenience to our customers, we arranged for a different aircraft to make the flight from Indianapolis to Newark as soon as possible last night.

I honestly fail to see why United needs to find a new aircraft and delay a full load of passengers for five hours over a passenger who refuses to check her bag. The pilot can call proper law enforcement to have the passenger removed if she continues to be difficult. No need to go full combat with the customer like the infamous Dr. Dao incident but if there is a basis for removing a passenger then that’s what needs to happen.

While I understand that people don’t want to part with their carry on baggage that’s the name of the game when flying regional carriers. In this case and if it’s a point to point connection I usually just check my bag in from the beginning so I can just retrieve it at the baggage claim. Especially on trans border flights I prefer to get off the plane asap and go to immigration. By the time I’m done there the bag is usually already on the belt.

Definitely a huge inconvenience for everyone on board that had to wait around until midnight to finally get out of Indianapolis, not to talk about missed connections and forced overnights at Newark considering the delayed arrival time. Is there really nothing around to get a drink or snack at the terminal including vending machines?

It’s obvious that the gate agents dropped the ball here for even allowing her to take such a large suitcase on. This could have been stopped from the get go had the agents paid proper attention. Usually the flight attendants also size up the bags when entering the plane and have a pretty good idea what fits and what doesn’t. This was a complete United fail from all sides paired with a nutjob passenger.