Back in May, I had a reader question (read more here) where IHG Rewards Club claimed to have emailed an offer in an error and refused to credit full points 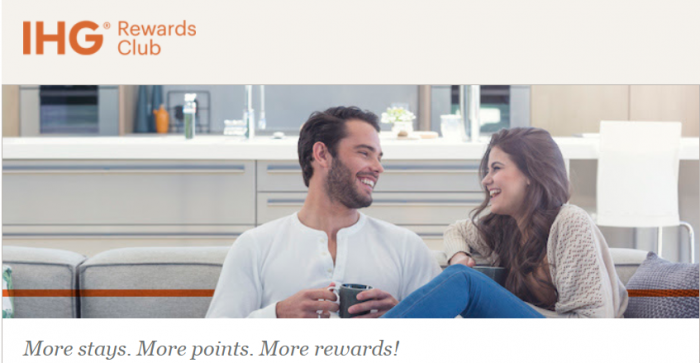 This case made absolutely no sense at all. IHG acknowledged that they had emailed the offer but refused to credit 71,000 bonus points (only 50,000). I advised the reader who was living in Singapore to open a case with local regulator against the IHG’s Asia-Pacific office in the city.

You can access IHG’s web page for this promotion here.

I just wanted to alert you on more troubles with the IHG Rewards Club “Stay In AMEA For Up To 71K Points” Promotion. Long story short, I was sent an email to register for this promotion, I registered and made the qualifying stays, finally to be told that they made an error in targeting me for this promotion, and hence not eligible for any bonus points.

You can find the full details in the email thread below. If you were to publish this story on your blog/newsletter, please remove any references to my personal details. Thanks.

PS: I have written back to voice my utter displeasure and copying their AMEA CEO and Global CEO.

Here’s the email that the reader sent to IHG leadership:

Let me start by saying that I am well versed with Legal terms and jargons, and I obviously read all terms and conditions before making a claim. Let us proceed, shall we?

First, I received an email for the “AMEA Stay Again and Earn up to 71K” promotion on 13 March 2018 (Singapore time) and I registered for this promotion on the same day which I have received an email confirmation. I have attached both copies of the email to this email. I fail to understand how this is a valid argument that this is a promotion that I was not targeted to participate in.

Second, I have completed 3 stays at ANA Intercontinental Tokyo hotel and 1 stay at Holiday Inn Express Shanghai Zhabei between 20 March 2018 and 31 March 2018. All eligible stays as defined by the terms and conditions of the promotion.

Third, I submitted a Point Discrepancy feedback on 6 April 2018 (Singapore time) to inquire about the missing points from the promotion and tracking my progress in this promotion.

Fourth, I sent an email on 9 April 2018 (Singapore time) to ask for an update to my feedback. I received an email on the same day titled “Follow up on your promotion concern – Ref # REMOVED” requesting me to provide details of the said promotion. I replied with an attachment of the promotion email (as attached and referenced to in the first point of this email) on the same day as well.

Fifth, I sent an email on 11 April 2018 (Singapore time) to ask for an update after furnishing the promotion details. I received an email on 12 April 2018 (Singapore time) from Maybelle confirming that the stays at ANA Intercontinental Tokyo hotel will be counted towards the promotion. Details of her reply can be seen towards the bottom of this email thread. I replied to the email from Maybelle on the same day to confirm that my 3 stays at ANA Intercontinental Tokyo hotel are counted towards the promotion and that I should be getting the maximum points of 71K from the promotion. Again, I fail to understand how this is a valid argument that this is a promotion that I was not targeted to participate in.

Sixth, I received an email on 16 April 2018 (Singapore time) from Lalalaine saying that the offer registration has to be done before booking the qualified stay, which meant that the stay on 24 March 2018 which was booked on 11 March 2018 (prior to registration on 13 March) would not be counted towards the promotion. The other 2 stays would be counted towards the promotion. I replied on the same day to disagree with the interpretation of the terms and conditions where it did not specifically state that a booking has to be after the promotion registration. I copied the entire terms and conditions for reference in the email. Once again, I fail to understand how this is a valid argument that this is a promotion that I was not targeted to participate in.

Eighth, I sent an email on 25 April 2018 (Singapore time) requesting an update to my request.

And here I receive this email from Nicole on 27 April 2018 (Singapore time) not replying to my request to point me to the relevant clause in the terms and condition, and instead saying that I was not targeted to participate in this promotion but was targeted for the separate AMEA Book Direct 40K promotion which I received on 25 April 2018 (Singapore time) and registered on the same day.

Given how this whole charade has played out, it no longer matters to me if you are not willing to keep up your end of the bargain in your very own programme. My view and faith in the IHG brand no longer exists. If you do not wish to provide me with the full maximum points of 71K in the said promotion, that is fine. I no longer wish to be associated with the IHG brand that lacks proper service level agreement (time to respond) and genuine customer service.

It took eight emails for the customer service in Manila to claim that the IHG Rewards Club member was not actually targeted for the offer that was sent to him.

Here are the emails from the corporate liaison:

Greetings from the Executive Office of IHG. Mr. Kenneth Macpherson, CEO – Europe, Middle East, Asia & Africa, IHG, received your email about your IHG Rewards Club Gold Elite account and the “Stay Again and Earn up to 71,000 Bonus Points” promotion email you received, and has asked I review this situation on behalf of IHG as a whole.

I’m very sorry for the frustration you experienced after receiving the email for the promotion, then being advised you weren’t meant to receive the email and it was sent to you accidentally. I want to make sure the appropriate internal actions are taken to help prevent this from occurring again. As such, I’m currently reviewing the email you received and sent to IHG with our Rewards Club Loyalty and Marketing managers. Once the review is complete, I’ll follow up with you after.

I appreciate your patience. I’ll be in touch with you as soon as I’m able.

I wanted to reach out to you and let you know I’m still reviewing the situation regarding the “Stay Again and Earn up to 71,000 Bonus Points” promotion email you received with our Rewards Club promotion managers. Once this has been completed, I’ll follow up with you after.

I appreciate your patience and I’ll be in touch with you as soon as I’m able. In the meantime, if you have any additional questions or concerns, please don’t hesitate to contact me directly.

Thank you for allowing me the time to properly review your experience with our promotion managers for the Asia Pacific region. I know you would have preferred to have had a response much earlier, and I apologize for the delay.

I’ve confirmed there was a promotion email list error that resulted in some IHG Rewards Club members receiving the “Stay Again and Earn up to 71,000 Bonus Points” offer, when they were not intended to participate in. I’m sorry for the incorrect email being sent you, as we want all members, especially our Elite members like yourself, to have full confidence that they are following the directions we give them to earn bonus points for staying at our hotels. Our Rewards Club promotion managers are aware of the issue and have taken steps to prevent similar email errors from occurring. Unfortunately we cannot force this promotion to credit you points for your stays in China and Japan. As such I’ve deposited 50,000 points into your account as a goodwill gesture. I know you would’ve preferred a quality, trouble-free experience as opposed to any compensation, and apologize again for failing to meet your expectations. Your current balance is 102,447 This is separate of any points you may earn from the “AMEA Book Direct 40K promotion”, which you were eligible and correctly offered to participate in.

Thank you again for taking the time to share your comments with us, Mr. REMOVED. I hope we have the opportunity to host you as our valued guest at another IHG property again soon.

Here are my questions to IHG:

1. Do they have any measurements in place about the quality of replies that their Manila office is sending out day and night?

2. Why it took eight replies out from their Philippines office get to the bottom of the issue that they couldn’t then handle?

3. Why customer service representatives are not empowered to resolve issues such as this?

4. Why the Asia-Pacific hasn’t automatically enrolled the members to whom the email was sent by “error”?

5. Do they understand that treating customers and loyalty program memners this way is certainly not the way for long term success of the company?

HERE WAS MY CONCLUSION AT THE TIME:

It was just maddening to read through all the emails that the reader forwarded me (all the communication with IHG). This is just not the right way to run any business and unfortunately this is not an isolated incident with the company.

The reader is based in Singapore where Intercontinental Hotels Group also has their Asia-Pacific office. He was able to open a consumer case against the Singaporean business and promised to keep us updated.

The first reply from IHG should have been that they had made an error with the promotion but have now deposited the missing 71,000 points for the reader’s account rather than trying all the tricks on their manuals not to honor the offer including falsely claiming T&Cs rules that didn’t exist on the following EIGHT emails.

I am still shaking my head.

Just for closure. This took quite a considerable amount of time. I am not at liberty to disclose the details as I signed a non-disclosure with CASE. It’s been resolved to my satisfaction 🙂

Although CASE does not function as a regulatory body or undertake investigation, CASE has been helpful and it seems to me that CASE’s letter does carry some weight 🙂

This incident does highlight the underhand tactics used by IHG and they are probably just hoping that most people would just couldn’t be bothered to go through the hassles of filing a claim. I am definitely staying away from IHG after I burned whatever points I have with.

I am glad that the reader was able to resolve the issue to his satisfaction with the help of CASE, although he is not able to disclose the full details due to non-disclosure agreement. It is nuts that you need to get government body involved to get IHG to honor their marketing promise.

IHG Rewards Club really should look into their customer service practices (I also recently received an email from this “Michael Lawyer”) because this is sure way to alienate customers.