There was an interesting article from the Wall Street Journal yesterday where they interviewed the CEO’s of American Airlines and Delta Air Lines about Economy Class and their own flying habits. 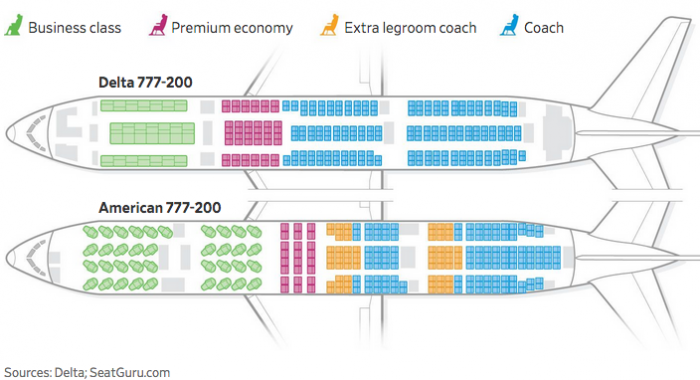 While the Parker and Bastian agreed to the interview to the Economy Class focused interview, United Airlines CEO Oscar Munoz declined the interview – go figure!

While we all write about fancy travel in First- / Business Class  and obviously love to fly in the premium cabin the vast majority of the population still ends up flying Economy Class based on value and price point.

What do the CEO’s of Americas largest airlines think about their Economy Class product and do they fly it themselves sometimes?

The Middle Seat asked the chief executives of the big three U.S. airlines to plop down in the back of one of their airplanes and explain why they think the skimpy confines of coach today are acceptable.

Two agreed. Delta CEO Ed Bastian, 6-foot-3, arranged for an interview on his company’s most recently reconfigured Boeing 777-200 in Atlanta. American CEO Doug Parker, also 6-foot-3, snuggled into a coach seat on a reconfigured 777-200 in a Dallas-Fort Worth airport hangar.

One refused: United’s Oscar Munoz declined to be interviewed in a coach seat. Asked why, United declined to comment. …

United has received a lot of flack for their introduction of Basic Economy (I recently wrote about it here) but I’m not sure if it’s the right approach to refuse such an interview and as a result of that being portrayed in the media as “too good to fly Economy”. True or not it once more displayed a culture of United Airlines that their management has lost touch with the base customers.

Neither [of the two CEO’s] apologizes for packing in more, skinnier seats. Their message: If you want more space, buy it.

Legroom in standard coach on American, Delta and United is less than what you routinely get on Southwest and JetBlue.

Both CEOs say they fly standard coach a lot, though not for the nine-hour stretches that many find painful.

Mr. Bastian says he flies coach on most of his domestic trips because he thinks it’s good practice. Customers and employees are impressed when they see him there, and he wants to experience flights like more customers do.

This month he imposed a policy that all Delta director-level employees and above must ride in coach on trips under three hours.

Mr. Parker says he’s in coach roughly one out of every three flights, typically when first class and extra-legroom seats are already booked. Asked how he’d feel on a five-hour flight with the passenger in front reclining into him, Mr. Parker briefly flashed a road warrior’s instinctive nod.

“I feel what our customers experience,” he says. “Without a doubt, this is, by design, less space than you have in cabins for our customers who desire a different product.”

I wouldn’t expect any apology over the measures which the industry took to gouge travelers and this ain’t just about seat pitch but the service overall, starting with baggage fees. The customer service also went downhill to the point of where I frequently tell people who only fly occasionally that unless you can swing an airline Elite Status just go for best price on any available carrier. It simply doesn’t pay to shell out extra money to fly Economy Class on a legacy carrier just to deal with horrible customer service, tiny seat pitch and baggage fees.

Southwest and JetBlue provide very decent service and value and this holds especially true to someone who doesn’t hold elite status with a legacy carriers frequent flyer program (or their respective partners).

So how about the future of Economy Class flying?

Both CEOs pledged that they won’t go any tighter.

Mr. Bastian says Delta has settled on a standard seat pitch of 31 inches. (Seat pitch, the length from one spot on a seat to the same spot on the seat in front, is the industry measurement for the space of one row.) Delta does have some 30-inch rows on its Airbus A320s and A319s, a relic of years when the airline wasn’t making as much money. “We’re not making those decisions any longer,” Mr. Bastian says. …

Mr. Bastian promised that Delta would stick with nine-abreast in its 777s. It’s part of the airline’s overall strategy to be more reliable and even comfier than rivals. “We believe we get more revenue by having a better product,” he says. …

American is bringing in new planes with even skinnier seats set in 30-inch rows. That’s as low as American will go, Mr. Parker says.

American hasn’t “done anything that makes the main cabin product less desirable than it was before,” he insists. If customers complain enough about tight seating space, American would change. He says that hasn’t happened. …

American initially ordered the planes with three rows at 29 inches, but backed off when word leaked. Squeezing basic coach “is not something we will continue to push,” he says.

I’m on the fence with the approach American has been taking here. Even though the entire industry put on the screws but AA tried to push it too far and customers fought back. They apparently got the message.

Economy Class travel on U.S. carriers generally sucks and there is no way to find a way around that. Now you can try and find a way to work around that with getting a credit card that provides preferential treatment or ideally obtain elite status to be eligible for priority services such as complimentary baggage, premium seating and priority check-in/security/boarding.

As far as Mr. Munoz and United are concerned it appears they’re trying hard to send the wrong message to customers with their “we’re above it all” attitude and I’m not sure if this is going to backfire at some point.