The Transportation Security Administration has started a secret, controversial surveillance program targeting internationally arriving U.S. citizens who are then followed and profiled by Federal Air Marshals going even so far as taking down license plates of cars picking you up curbside. 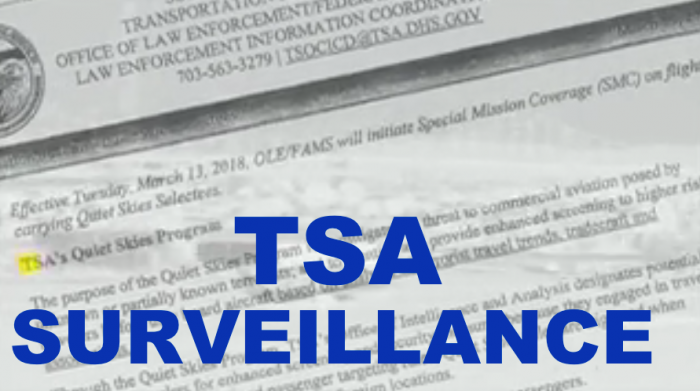 According to internal documents obtained by the Boston Globe affected individuals will be remain on the list and be shadowed for up to 90 days or three encounters, whichever comes first, after entering the United States.

The program which apparently started in Spring of 2018 is a bombshell causing countrywide uproar since details of the potentially illegal surveillance unraveled and news outlets report about it.

According to documents obtained and sources from the Marshal Service the targets vary from regular travelers, executives, flight attendants to even a fellow federal agent with a ‘suspicious travel pattern. These people are then shadowed for months, profiled and habits written down to establish a profile. Nobody knows what happens to these details after the 90 day period (though I guess we can all guess very well – they likely keep it on file).

You can access the article of the Boston Globe here.

Federal air marshals have begun following ordinary US citizens not suspected of a crime or on any terrorist watch list and collecting extensive information about their movements and behavior under a new domestic surveillance program that is drawing criticism from within the agency.

The previously undisclosed program, called “Quiet Skies,” specifically targets travelers who “are not under investigation by any agency and are not in the Terrorist Screening Data Base,” according to a Transportation Security Administration bulletin in March.

But some air marshals, in interviews and internal communications shared with the Globe, say the program has them tasked with shadowing travelers who appear to pose no real threat — a businesswoman who happened to have traveled through a Mideast hot spot, in one case; a Southwest Airlines flight attendant, in another; a fellow federal law enforcement officer, in a third. …

Already under Quiet Skies, thousands of unsuspecting Americans have been subjected to targeted airport and inflight surveillance, carried out by small teams of armed, undercover air marshals, government documents show. …

All US citizens who enter the country are automatically screened for inclusion in Quiet Skies — their travel patterns and affiliations are checked and their names run against a terrorist watch list and other databases, according to agency documents.

When someone on the Quiet Skies list is selected for surveillance, a team of air marshals is placed on the person’s next flight. The team receives a file containing a photo and basic information — such as date and place of birth — about the target, according to agency documents.

Deploying air marshals to gather intelligence on civilians not on a terrorist watch list is a new assignment, one that some air marshals say goes beyond the mandate of the US Federal Air Marshal Service. Some also worry that such domestic surveillance might be illegal. …

Since this initiative launched in March, dozens of air marshals have raised concerns about the Quiet Skies program with senior officials and colleagues, sought legal counsel, and expressed misgivings about the surveillance program, according to interviews and documents reviewed by the Globe. …

Agency documents show there are about 40 to 50 Quiet Skies passengers on domestic flights each day. On average, air marshals follow and surveil about 35 of them.

In late May, an air marshal complained to colleagues about having just surveilled a working Southwest Airlines flight attendant as part of a Quiet Skies mission. “Cannot make this up,” the air marshal wrote in a message.

I suggest to read the entire Boston Globe article thoroughly because the revelations and extent of the surveillance is shocking to say the least.

Here if part of the checklist that the Marshal’s go by and what kind of information is collected:

This program is wrong on so many levels both morally and potentially legally, keeping in mind that this isn’t a holdover from a previous administration from post 9/11 times but something that started in early 2018 and has definitely been developed in the most recent past by DHS/TSA.

Naturally it’s extremely important to have tight control at U.S. ports of entry (or any country for that matter) to screen for potential threats as well as individuals who have a criminal record or an open warrant, especially of foreigners arriving and seeking admission.

However this goes much further as the targeting follows a loosely or even non-defined pattern based on the travel history of a U.S. Person who is protected against warrantless searches and surveillance under the Fourth Amendment.

Especially worrisome apart from the entirety of this clandestine operation is the depth of which the profiling goes, including taking down license plates of a car that’s picking you up at the airport. And what happens to all this data after the fact?

This is wrong and goes way too far. We’re talking here about law abiding citizens who have done nothing wrong and just returning from a foreign trip. No matter what countries this trip involves, if there are concerns by CBP upon arrival then anyone can be referred to the secondary inspection area where an officer can run a detailed background check. But a three months surveillance without a warrant? That is insane!

I wouldn’t be surprised if this entire affair will make waves up to the highest echelons of power. When the story about electronic surveillance programs of the NSA broke a couple of years ago it also racked up lots of press coverage and forced the government to terminate, respectively amend surveillance programs.