Norwegian Air among other carriers currently has some problems with their Boeing 787 Dreamliners so they decided to charter the A380 from Hi Fly to operate this route – with some serious fringe benefits for Premium Economy customers.

Customers that have a Premium Economy Class ticket on this route will be seated in the Business- or even Suites Class cabin of this A380, given that the two aircraft HiFly owns are ex-Singapore Airlines.

John wrote about the Hi Fly Airbus A380 back in April (see here).

I came across this aircraft substitute through an article on Skift (access here) and decided to look up some flight details on Expertflyer.

Some Norwegian Air passengers flying this month from New York to London are in for a superjumbo upgrade.

The European discounter, which has a shortage of aircraft because of problems with Rolls-Royce engines on its Boeing 787s, temporarily will rent an Airbus A380 from Hi Fly, a charter operator, an airline spokesman confirmed Thursday.

For much of August, Norwegian will fly the A380 on its overnight departure from JFK Airport to London Gatwick. The spokesman Norwegian said the lease “most likely” will last for 20 days, and should start soon, though he declined to give exact dates. …

Renting the massive airliner won’t be cheap, but the airline likely calculated it was worth it, particularly for public relations value. Recently, because of engine problems, Norwegian has wet-lease antiquated and less uncomfortable aircraft from charter operators such Spain’s Wamos Air. The UK newspaper The Guardian said Norwegian customers have described the aircraft as a relic of the 1980s with ashtrays in armrests.

“Obviously it hurts the brand,” Norwegian CEO Bjorn Kjos told Skift last month in an interview in Oslo. “If you want to fly on a Dreamliner and you end up with an old 747, that’s not what you expected.”

For the New York flight operated by Wamos earlier this summer, Norwegian had given passengers the right to switch to another flight, Kjos said. …

This A380 substitute is exclusive on the London-Gatwick – New York JFK Route during the next three weeks and only for one flight per day: 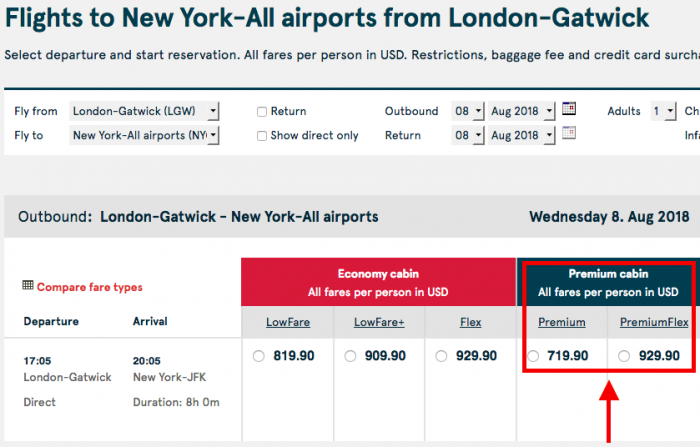 Here is the flight detail pulled from ExpertFlyer:

Now, Norwegian doesn’t sell Business Class and just Premium Economy as shown on the pricing matrix above. Booking Premium Economy might be the best investment ever made (apart from the fact that Premium is actually cheaper than Economy in the example used). 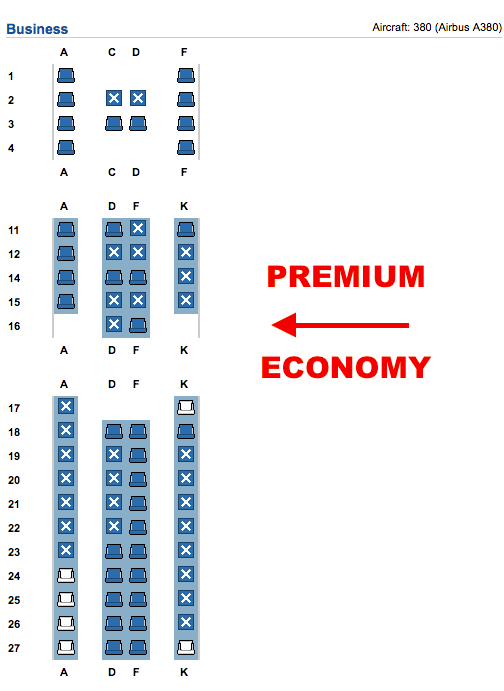 Premium Passengers will be seated in the Business and First Class (Suites) cabin of the A380 for the 8 hour flight to New York JFK.

The only downside at the moment is that it’s impossible to reserve a seat when booking through the Norwegian website as the seat map isn’t loaded on there. You could possibly get one calling in but I don’t really have a solution or workaround for that problem at the moment.

If you find a decent price for these Norwegian flights then it will definitely be great value as far as the seat is concerned. Quite a few seats appear to be blocked at the moment (those marked with X) and will likely be reserved until the time of check-in or even for airport control.

Obviously there won’t be any special meal service in these cabins apart from what is the standard for Norwegian Premium Economy. You can always bring your own caviar and lobster roll but carrying a bottle of Champagne from Duty Free might be difficult as the consumption of personal alcohol is usually not permitted. Not saying you couldn’t get away with it, likely depends on the crew.