The American Express Centurion Lounge at Dallas Ft. Worth airport Terminal D did not reopen yesterday as scheduled and will in fact not ever open again.   Amex told us today however, that a new lounge will open in October. 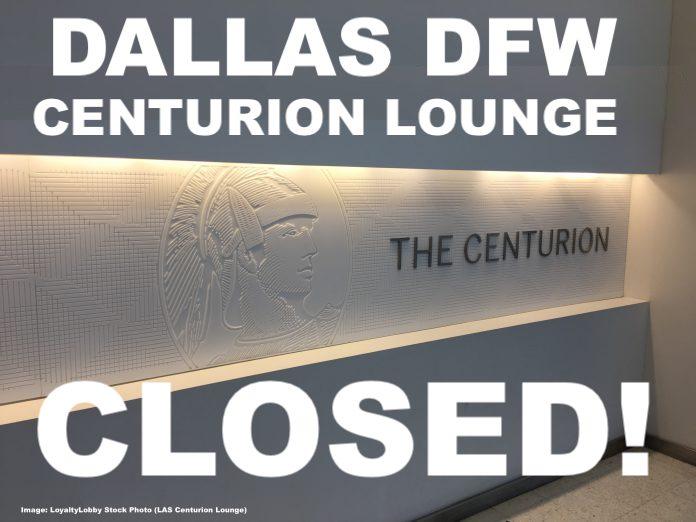 As per information of an Amex Online Chat Representative, the additional maintenance required for the current Centurion lounge won’t allow them to reopen it and customers should wait until the new lounge opens in October.

This is a huge blow for Dallas based Amex Platinum members and those transiting DFW on a frequent basis. Amex didn’t even bother to update their website yet to reflect that information:

The alternative given – The Club at DFW – is currently under renovation as well and will reopen permanently a month from now (September 18th)… if nothing goes wrong.

Here is what Amex told me today when I inquired about the DFW Centurion Lounge: 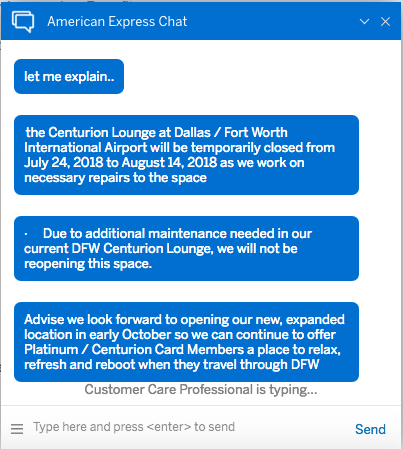 Closing that Lounge for large scale maintenance was a horrible decision and then letting it go on for weeks, only to tell members on the day it’s supposed to re-open that it will be closed permanently is a joke.

In fact this is the third bad experience I have had with Amex Centurion Lounges during the last two months. The only positive visit I had was at SFO and that one was rather brief.

Unfortunately Dallas is one of these airports where American Airlines doesn’t operate a First Class Flagship Lounge for their First Class, Executive Platinum and oneWorld Emerald Members so the Amex Centurion Lounge has always been the best option.

I was scheduled to have another 4 hour transit at DFW in early September but will call for a different routing on the way to Tokyo now as I am not a big fan of the AA Admirals Clubs there. At least not for 4 hours during lunchtime.

American Express Re-Opening Some (Two) Of Their Closed Centurion Lounges From October 5, 2020