This weeks Whine Wednesday is about the outrageous immigration queues at London Heathrow Airport which according to latest media reports reached up to three hours in wait time for arriving foreign passengers. 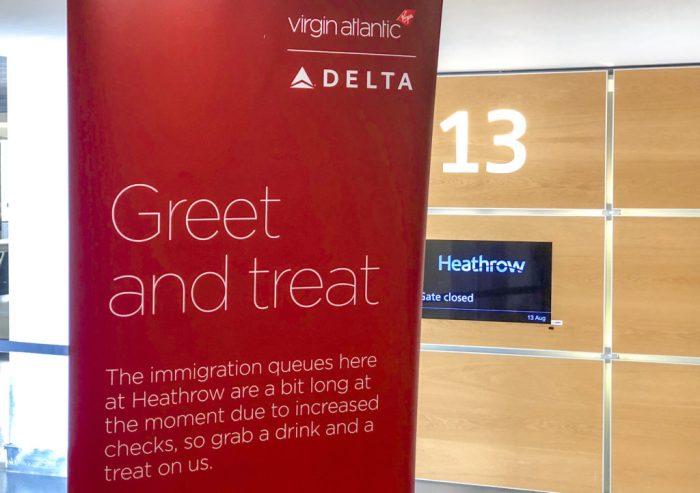 Today Virgin Atlantic has officially called on the BAA and UK Border Force to take immediate action to reduce these wait times as soon as possible.

Apparently London Heathrow (at least at some Terminals) has become a hellhole as far as immigration is concerned with passengers filling arrival halls and aisles, waiting for hours to be processed.

According to a Times article (access here) this week the situation at Heathrow got entirely out of hand.

… There was only one day last month when the UK Border Force achieved its target of processing 95 per cent of passengers from outside the European Economic Area within 45 minutes.

The longest queues this summer were on July 6, when visitors from outside the European Union and a handful of other European countries spent up to two hours and 36 minutes waiting in immigration queues, according to data obtained by Virgin Atlantic. …

Two hours and 38 minutes – let that sink in for a moment. That’s a third/quarter of a long haul flight or even half of New York-London.

Virgin Atlantic has voiced their concern for months and this week decided that a breaking point has been reached, calling for immediate action to resolve this problem. You can access their blog here.

Today we have called on Border Force to take action as international visitors to the UK are being greeted by wait times of up to two hours 38 minutes to clear immigration.

Recent high profile events such as the Royal Wedding and the favourable exchange rate have contributed to increased international visits in 2018, and coupled with an under-resourced Border Force has led to excessively long queue times at immigration.

Here at Virgin Atlantic, we’ve seen US passenger numbers increase by 20%, and we’re calling for urgent action to reduce the waiting times and extend the warm welcome visitors deserve. We have 23 international arrivals per day into London Heathrow and we’ve set up a “greet and treat” service for customers – providing water and snacks – to try and improve the experience.

The UK Border Force has a Service Level Agreement (SLA) to process at least 95% of non-EEA passengers, such as those from the US or China, through immigration within 45 minutes. In July there was only one day when this target was met, and the longest queue time occurred on 6th July when non EEA visitors spent up to two hours 38 minutes waiting in immigration queues.

Our CEO Craig Kreeger said: “This summer significant queues at Border Control mean that thousands of visitors have faced two-hour queues to get their passports checked, leaving them frustrated before they’ve even started their trip. At Virgin Atlantic, we’re doing our bit to try and help our international customers –providing extra staff, as well as drinks and snacks for the queue – but only the Border Force can resolve these unacceptable queue times and they must take action.

It’s hard to say what the actual issue is that causes these delays, lack of staffing or a high increase in arrivals during peak times? When I wait for hours at immigration and see plenty of empty immigration desks without staff as I often documented in articles concerning China, Indonesia, Korea and Taiwan then it makes my blood boil. Totally unnecessary and more staff should be brought in to process arrivals.

At least some countries and gateways offer electronic entry through their respective systems and barriers so the best recommendation is probably to seek these gates out immediately if a traveler is eligible to use them.

To be fair, most of these countries such as the U.S. and China also have outrageous immigration lineups and one can wait for hours in order to be processed. As such I don’t have the slightest problem paying it back in kind but it really shouldn’t be the standard to inconvenience travelers in such a way when adequate staffing could provide a remedy for this problem.