This week’s Compensation Clinic comes from one of our readers whose flight from Reykjavik to Dallas on American Airlines got delayed by a day due to mechanical issues with the incoming aircraft.

Although Iceland is not part of the European Union, it belongs to the European Economic Area (EEA), which makes airline operations in Keflavik Airport (KEF) liable by EC261/2004 passenger protection rules.

In this case, our reader and his family were entitled to a compensation of 600 € for each one of the members of their party due to the delay. On top of that, the airline has the obligation of offering a rebooking on the earliest flight possible and to provide food and accomodation if required.

This is the email we got from our reader:

While delays can happen as the normal course of business, it is how an airline handles it that really makes the difference. In this case, American Airlines handled a severe delay with flying colors.

I planned a family vacation to Iceland, with a return flight on AA231 on 26 July. We were informed the morning of 26 July that the plane had a delay until 06:00 on Friday, 27 July. This was due to a mechanical issue with the inbound aircraft and was forced to turn back to the US over the water!

The silver lining of this delay was the way the airline handled it. First, American had visible on multiple counters pamphlets regarding passenger rights under EU261 (see pictures). Not only were they written in English (British), they also were in Icelandic with all of the pertinent information. No surprises or shenanigans from airport staff, as they were handing these out as well. They rebooked all five of us on alternate flights and gave us food vouchers valid on all airport outlets. 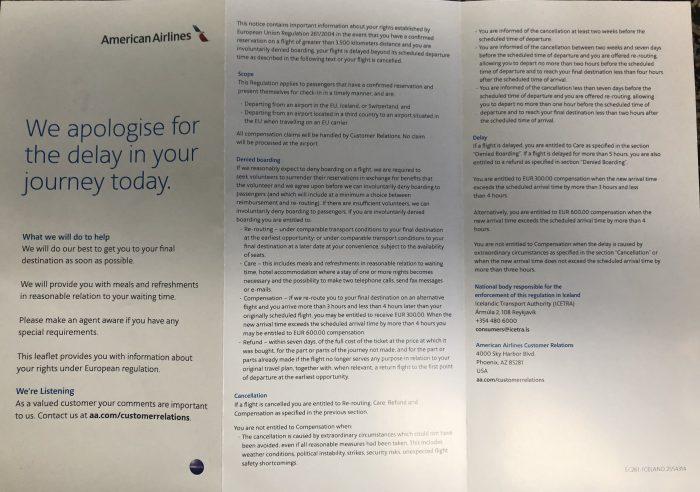 My party filed their individual claims, all of which were approved within 48 hours of their respective submissions.

In short, American deserves praise here. They fully owned up to the situation and provided prompt response with the appropriate level of compensation for the situation (even the checks arrived within two weeks from the claim!).

Here is the note our reader sent to American Airlines:

I am writing to you regarding flight AA231. My booking reference for this flight was <redacted>.

The judgment of the Court of Justice of the European Union in Tui & others v CAA confirmed the applicability of compensation for delay as set out in the Sturgeon case. As such, I am seeking compensation under EC Regulation 261/2004 for this delayed flight.

The passengers in my party were <redacted>

I am seeking compensation of €600 per passenger, due to the fact the scheduled length of my flight was greater than 3500 km.

I look forward to hearing from you and would welcome a response within 7 days.

And here is the response he got from Americal Airlines’ customer relations team:

On behalf of American Airlines, thank you for being a valued AAdvantage® <redacted> member and for contacting Customer Relations. We appreciate the opportunity to address your claim for compensation based on European Regulation 261/2004.

<redacted>, we regret your flight from Reykjavik was delayed on July 26, 2018. Our aim is not simply to provide transportation to your destination. We want to help our customers enjoy a pleasant journey along the way. Please accept our apology for the inconvenience and impact this irregularity caused to your travel plans.

As you may know, European Union Regulation (EC) No. 261/2004 of the European Parliament and Council has established common rules on compensation and assistance to passengers in the event of cancelations or long delays of flights. Under this regulation, passengers are entitled to established levels of compensation, depending on the length of delay.

Our records indicate flight AA231 was delayed which resulted in arrival to your final destination of Dallas/Fort Worth more than 4+ hours later than planned. Therefore, we have authorized compensation in the amount 600EUR to you.

The payment will be issued in the USD equivalent and mailed to the address provided. Please allow up to 45 business days for processing and arrival of payment by U.S. Postal Service. Acceptance of this compensation, hereby releases American Airlines, Inc. from any claims for compensation under European Union Regulation (EC) No. 261/2004 in connection with flight 231 from Reykjavik to Dallas/Fort Worth on July 26, 2018.

We are happy to extend the same offer to your travel companion; however, due to our privacy policy, we ask that they contact us directly. Please have them contact us from their personal email via www.aa.com/customerrelations, include reference <redacted> and our system will automatically link up your messages.

<redacted>, we know your time is valuable and we’ll do our very best to restore your confidence in our ability to get you where you are going — as planned. We will look forward to welcoming you aboard again soon.

In this case American Airlines handled this delay by the book, following all EC261/2004 guidelines. The airline informed the passenger about his rights, rebooked him free of charge at the earliest option, offered food vouchers and expedite-processed the payment of 600 € that each member of his party of five was entitled to due to the delay.

Our reader and their family got a total compensation of 3,000 € at his first communication with the airline, with no drama or delay tactics (sadly usual among some carriers) on their side. If only all airlines would handle these claims the same way!

Hong Kong International Airport has taken an unsual step and decided to close down an entire concourse, housed in their midfield Terminal that was...