This week the Compensation Clinic-case comes from a Marriott affiliated Delta Halifax hotel where the Do Not Disturb-sign was not properly observed. 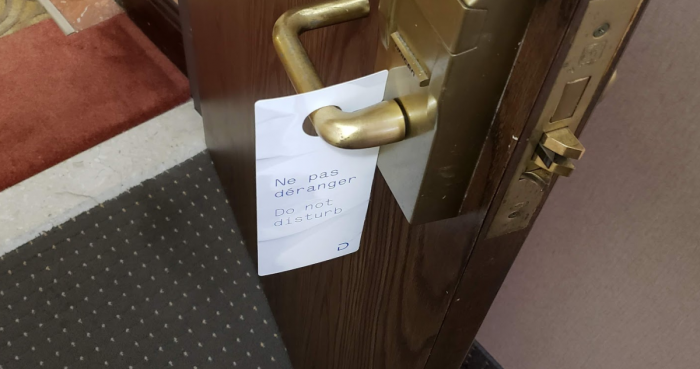 I checked in around 8PM on Saturday night and hotel had upgraded the one-night stay to a suite. The front desk asked if I would need late check out on Sunday. I said that put 4PM just in case I needed it and she said that it was done. My plan was to do some sightseeing on Sunday afternoon.

There were two doors to the suite and put the Do Not Disturb-sign to both door knobs. I was working on the Sunday afternoon and preparing to leave when someone was knocking at the door at 1:30PM.

Someone from the front desk was checking the rooms that were due to check out on Sunday if they had already left. I pointed out that I had 4PM check out and he argued that the clerk on Saturday night had not properly marked it to the system.

I spoke with the Manager on Duty upon leaving and we agreed 10,000 points as a compensation for the disturbance. She said that they had problem depositing compensation points to member accounts due to the program member (this was week before it was happening) but she would do it when possible.

The points posted to the account few days later.

Not sure why the hotels cannot get this 4PM check out and their internal systems to work? It wasn’t the housekeeping team member this time but rather someone from the front desk checking out the rooms.

Why don’t they check the status of the member if they are eligible for the late check out and perhaps give a call rather than knock at the door?

I don’t mind keep collecting these compensation points but I would rather not be disturbed until the agreed check out time.

Reader Question: Are Marriott Travel Packages Still Worth It & Should I Buy Points?