Our Whine Wednesday today is about Sixt Rent a Car at Frankfurt Airport where I had a bit (a lot!) of trouble last week while picking up my rental. 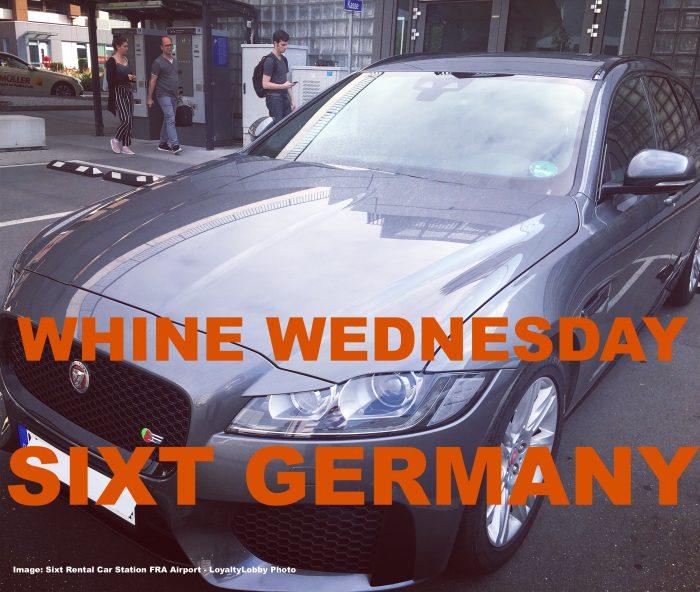 Sixt at Frankfurt Airport is one of their largest – if not THE largest – station in Germany and apparently there is a coherent lack of proper management at this location.

I’m a Sixt Diamond customer for at least eight years now and usually Sixt is my go-to agency when renting cars in Germany and select U.S. locations.

Last week I once again reserved a car and went to pick it up at Terminal 1 where the Diamond Lounge is located. Initially I was offered a Mercedes C class that had 3 damages in the windshield and numerous other dents and scratches. At 20,000 km on the clock this car should have left the fleet by now, at least for repairs.

The alternative was a Jaguar XF which was supposed to be a Sedan/Limousine. A few scratches were marked but nothing major. I was surprised when the car didn’t look like it was promised but I shrugged it off as maybe the agent made a mistake (she did as I was to learn later).

As I was driving off I recognized yet another damage in the windshield that wasn’t visible beforehand so I had to make a U-turn and return to the airport counter. Car returns are handled by ARWE in Germany (just a service company that processes these returns for Sixt and other companies). I asked them to call the Station Manager who eventually showed up and apologized. The ARWE employee wasn’t able to find the car as checked out which should have been an instant red flag. Instead they noted my contract by hand and sent me on the way. I was promised a call back regarding clarification and compensation.

The manager did indeed call back to tell me what happened: The counter agent had given me the key to the wrong Jaguar and I was driving around with an essentially non-rented car. On top of it all it was significantly more expensive that the one I was supposed to get – more than the $75,000 Amex Platinum rental car insurance covers. By this time I was already back home and unable to return to another Sixt station to switch it.

This was not only negligent but also dangerous. I was lucky enough I didn’t have a major accident and missed out on coverage. The manager also conveniently ‘forgot’ about the compensation and promised to call back again. No word since – I have filed a customer service complaint.