Lufthansa has announced that they will test a new service concept called Delights To Go at Munich Airport, targeting premium passengers who don’t have time to visit the lounge due to short connects or late arrival. 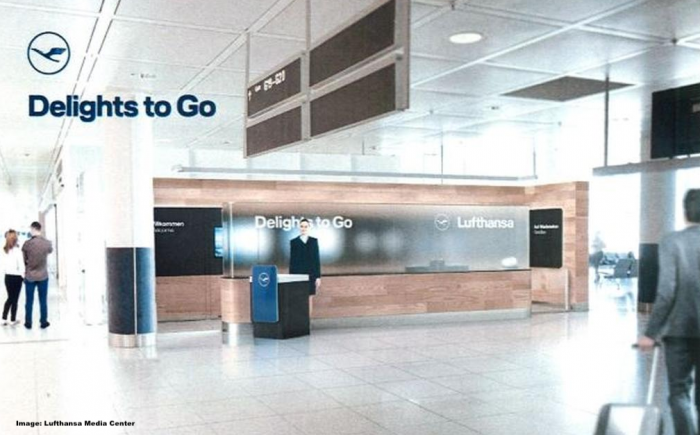 The trial will include a self-service counter at the departure area where a machine will distribute select snacks and hot beverages to eligible passengers after scan of the boarding pass.

This innovative concept could be something other airlines are looking into as well at some point as the trend clearly goes into the direction of cutbacks in on board catering even on longer regional flights.

The new system with the name Delights To Go is going to be installed at Munich Airport from September onward and will allow passengers whose status or purchased fare includes a lounge privilege to facilitate the Delights self serve areas.

In order to use the system the passenger has to scan the boarding pass after which it’s possible to select the preferred snack from a menu. The item is then distributed in a to-go-box. Furthermore, hot beverages are available and a lid is provided.

These so called ‘Delight Boxes’ include a variety of snacks such as: A piece of fruit, a cereal bar, a slice of cake, a bottle of water and a refreshment towel. The box itself if made of sturdy cartonage.

From what I read in the description of this concept all passengers who are eligible for lounge access are eligible to use the Delight counter. This would mean Lufthansa M&M Frequent Traveler cardholders, Senator & HON Circle members and other Star Alliance Gold customers plus obviously those ticketed in Business/First Class.

It’s to pass any judgement about the system before it even goes live but I like the option of being able to grab something on the way to the plane, especially if there is no/limited catering on the flight. The question remains how much time this really saves vs stopping by the lounge.

Last Call: Lufthansa Miles&More Flex Plus Awards Without Airline Surcharges For Bookings Made Through February 28, 2021