This week I had to cancel a British Airways ticket which I booked on Expedia a couple months ago and wanted to write a brief report about my very positive experience in this case. 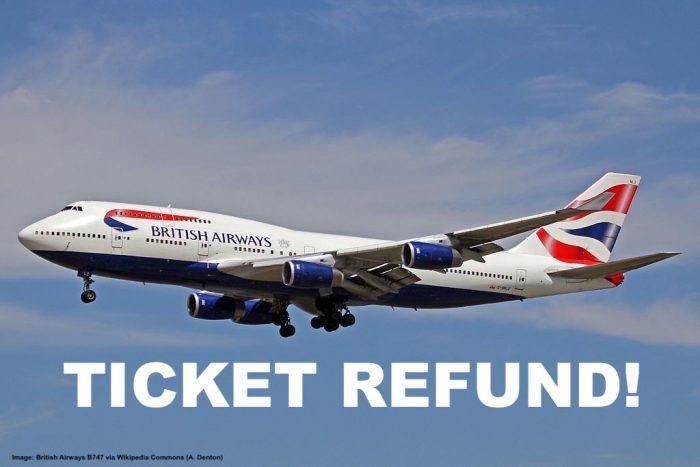 Even though tickets are officially non-refundable that doesn’t mean you don’t get any money back as the airlines are obliged to refund the taxes levied by a third party such as security fees and airport taxes.

I initially booked this ticket because I needed to fly in my 4 British Airways segments per year in order to re-qualify for Executive Club Gold status. For this purpose I found a very cheap ticket from Frankfurt to Las Vegas and back: FRA-LHR-DFW-LAS / LAX-DFW-FRA. All of these flights were under BA flight numbers and the total was just 311 Euro in Economy Class. 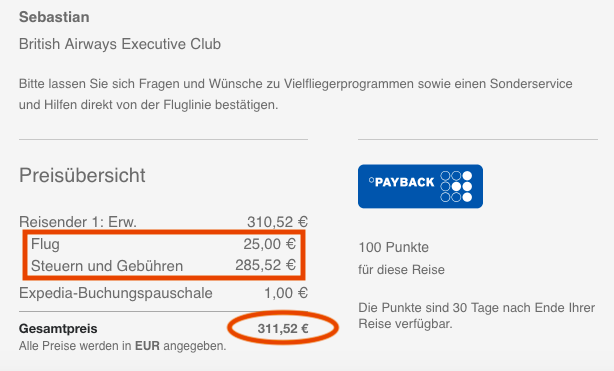 I booked the ticket through Expedia because that was the only source that allowed me to book everything as BA codeshares even though some flights were obviously operated by America Airlines. With oneWorld it’s always the code that counts how the flights are being credited, totally opposite to how Star Alliance handles it.

Anyway last month British Airways suddenly had very good fares in Business Class from Germany to Asia and I decided to book an open jaw, going to Korea next week and returning from Bangkok in Mid December. Sufficient for my 4 required segments and that way I don’t have to sit 2 long hauls in Economy.

I called Expedia and was told that I’d get a refund of 116 Euro back from that non-refundable ticket. Usually Expedia charges a 50 Euro processing fee but the agent decided to just waive that “because it’s Sunday” which was surprising but of course welcome. 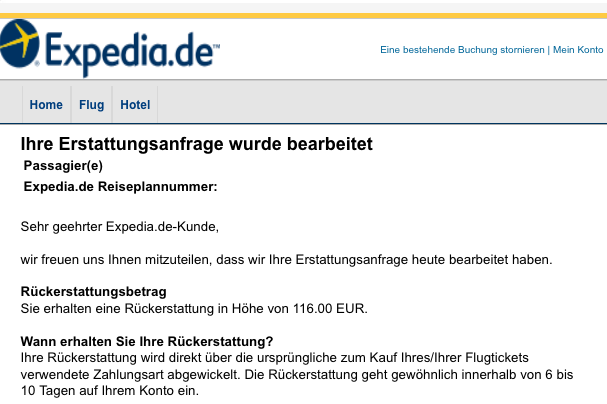 The Expedia confirmation mentions a time frame for the refund to hit my credit card but today (just two days after the cancellation) I got the email from Amex that the credit has hit my account: 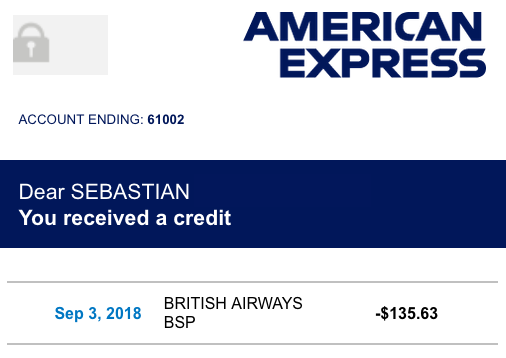 That was extremely fast and since it was BA who charged my credit card I also receive the fund back from them directly, not Expedia.

Overall I lost 195 EUR by cancelling this ticket but that’s a very moderate amount. In fact almost any revenue air ticket these days has a $200-$300 change or cancellation fee if even possible to make any such changes.

Even if a ticket is non refundable you should always request a refund of the taxes and fees and see what’s left over (if any).

The only reason why I was able to get away losing this little was because the basis ticket price was extraordinarily low with a large chunk of taxes and fees. And the Expedia processing fee would have eaten up a good 40% of that remaining value hadn’t I gotten a friendly agent who didn’t mind that I pester him on a Sunday morning.

I’m kinda curious what happened to the remaining 170 EUR of the taxes/fees and have inquired with British Airways to investigate and give me a proper breakdown. 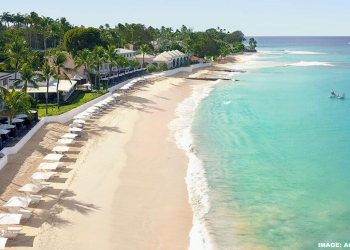