An Emirates A380 flight from Dubai to New York JFK was quarantined upon arrival after a high number of passengers and crew reportedly fell ill during the flight, prompting action by the Centers for Disease Control (CDC). 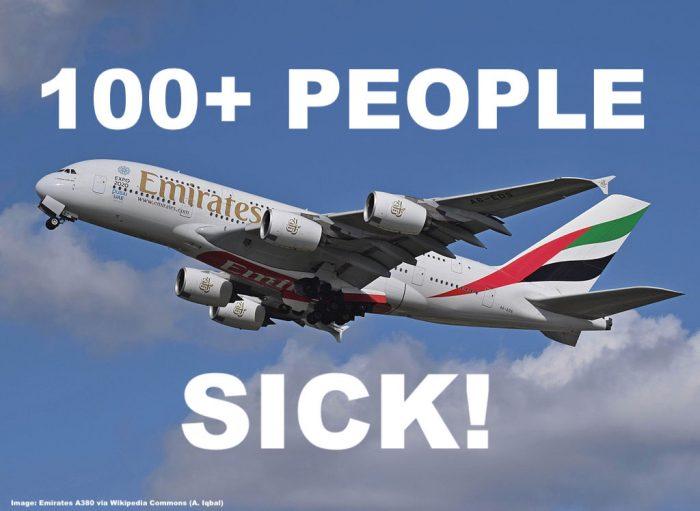 According to a statement by the CDC the total number of sick passengers is over 100 with 10 crew members and passengers receiving medical treatment at a NY hospital.

The aircraft was directed to a remote stand and quarantined while the CDC and DHS/CBP investigated the situation and had to decide if passengers were allowed to deplane and leave the airport on their own.

CBS New York reported about the incident involving 100 ot the 500 people on board the Emirates A380.

A plane from Dubai landed at JFK Airport and was held away from the terminal after several passengers on board reported feeling sick.

The Emirates Airbus A380 arrived at Terminal 4 and was met by the Centers for Disease Control and Port Authority police.

After interviews and inspections, 10 crew members and passengers were transported to a Jamaica Hospital in Queens. Nine others showed symptoms but refused medical treatment.

Emirates Flight 203 landed in New York Wednesday shortly after 9 a.m. with about 520 people on board. …

Shortly before 10:30 a.m., Emirates Airlines said only about 10 passengers from Dubai had taken ill. Passengers said the number was in dozens, and the CDC issued a statement that 100 people were sick, CBS2’s Dave Carlin reported.

A government source briefed on situation said there was no evidence of a security or terror issue. Emirates‘ home office told U.S. officials it believes this incident was caused by food poisoning, but passengers also suggested a nasty flu virus could also be to blame.

“Passengers who are not ill will be allowed to continue with their travel plans, and if necessary will be followed up with by health officials,” said the CDC in a statement.

Mahesh Varavooru says his wife was not one of numerous passengers who fell ill, but she did see several people vomiting during the flight.

“She was scared, obviously, because it didn’t taxi yet and she was hoping the fight was going taxi and she couldn’t get out and was the middle of runway and cops all around,” Varavooru said about his wife’s experience on the plane.

Statement: Emirates can confirm that about 10 passengers on #EK203 from Dubai to New York were taken ill. On arrival, as a precaution, they were attended to by local health authorities. All others will disembark shortly. The safety & care of our customers is our first priority.

Obviously their response shows that the only number they publicly admit to is the people who got treated in the hospital despite what the CDC says.

A passenger posted the entire episode on Twitter including the CDC Form all passengers had to fill out: 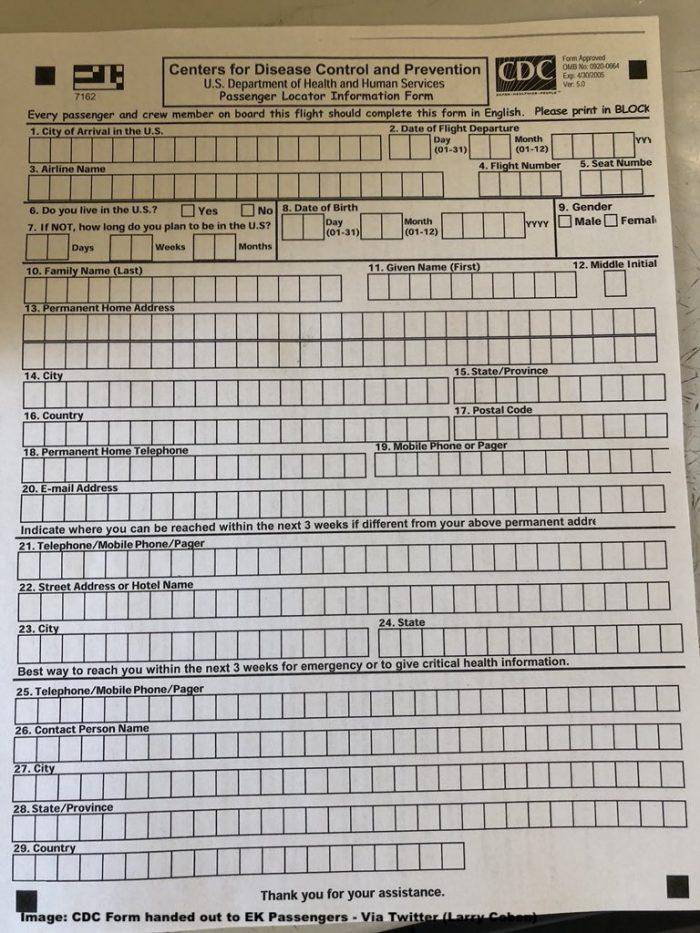 Hopefully everyone involved is going to feel better very soon, a bad food poisoning (if this was indeed the cause) can take a couple days to wear off.

It’s extremely rare that passengers – let alone this many – get sick from airplane food as it’s usually carefully prepared in a hygienic environment though then frozen/chilled and reheated on board. There is always a minor risk involved hence the infamous cockpit dining rule that the pilots have to consume different meals.

Ultimately the cause will be determined but the number (100 out of 500) could mean something was wrong with one of the less popular dishes that were being served on board. Irrespective of what the cause was, this is very serious and eventually Emirates should be a bit more forthcoming and apologetic about the incident.